3 Reasons Cancer seems to be on the Rise, and What you can do about it (Part 1 of 2) 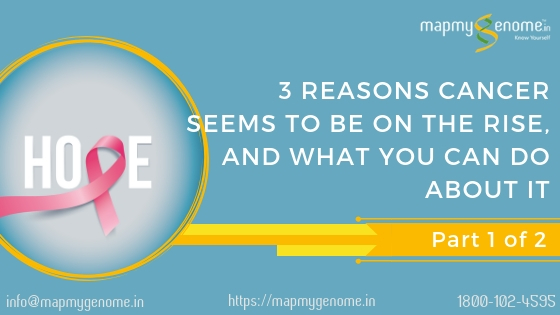 Cancer may have been a “grave, debilitating disease” in your grandparents’ time, but sadly, today,  it has reduced to a rather common, almost a lifestyle disorder.

Or so it seems.

So has cancer really become that common? Well…yes, the fraction of people diagnosed with cancer has increased exponentially over the last couple decades. There are numerous articles peppered across the internet and research journals alike for your reading pleasure today – all of which claim to deal with cancer statistics. Just so you are forewarned – It’s a grave read, since most of them, if not all, conclude that cancer prevalence is on the rise, with estimates touching a rather alarming 1 in 2 chance of welcoming the disease on your personal health and medical record a little ways down the road. Such studies have also led to widespread “belief” about the presence of some “new” factor at play, one that must be nipped in the bud NOW! Aluminium cooking utensils, demineralised and devitalised foods, processed meats and cheese, coffee, pickled vegetables, exposure to a hairdressing salon (!!) are just a few victims of this mass hysteria, rapidly becoming things we are warned against in our quest to keep cancer at bay.

In fact – I’ve put the list of “carcinogens” classified by none other than the International Agency for Research on Cancer (IARC) for your reading pleasure. Before you succumb to the supposedly inevitable cancer-centric future, there are a couple things you need to know. Yes the number of cancer diagnoses have gone up in the recent past, but the advancements in medical diagnostics has allowed for highly sensitive cancer screening and diagnostic tests, leading to this high number of diagnoses. The statistics standalone seem to point to inflation – but could it actually be conflation?

Here are a couple reasons why it seems as though cancer prevalence is on the rise:

1. We are living longer. Ageing population is the most-sought-after residence of cancers.

By far, the biggest risk factor for cancer is the natural process of ageing. Our valiant efforts over the past decades towards increasing longevity seem to have paid off, with life expectancy rising from 45 years (1950) to over 75 years today. However there seems to have been a trade off.

Globally, over three quarters of cancers are diagnosed in people over the age of 60. The reason is fairly simple; Cancer is a disease of our genes – the little functional units of our DNA that hand out instructions to each and every cog of the microscopic machinery inside each cell in our bodies. And like any other piece of machinery, as the pieces wear out over years of tireless work, errors can creep in. It’s these mistakes that set the foundation stone for a cell’s journey towards becoming cancerous. Here on out, it’s simple math. Longer you live, the more time there is for these errors to accumulate, the higher your chance of adding an oncologist to your “favorites” on the contact list. Over 77% of cancer diagnoses are made in people over the age of 55, a segment of population that’s expected to double (and then some!) by the year 2060. The National Cancer Institute puts the average life expectancy at 79 years, while establishing that the median age of cancer death is about 73. There are a couple of things that can explain this shift in demographics – from the entry of the baby boomer generation into the retirement age, to the success of medical sciences in aiding longevity.

Simply put – if you consider the ever increasing fraction of the “aged” in the population, it is clear to see why we have witnessed an increase in cancer incidence globally.

Ok, let’s not misconstrue this. Better screening doesn’t lead up to more cancers, just catches more of them. While your grandparents heard of cancers claiming lives of those around them much less often we do, they also speak of many deaths of near and dear ones due to “unknown conditions”, “mysterious illnesses”, “sudden rapid declines” and “inexplicable reasons amounting to will of god”.

For the most part, the lack of effective cancer screening and/or diagnostic tests in the days of yore led to a majority of cancers claiming lives undetected. That has changed today. Drastically.

The advent of next-generation cancer screening tests, genetic testing, and highly sensitive, effective and precise diagnostic tools has amounted to a significantly higher number of cancers being caught in early stages. Breast, prostate and colorectal cancer screenings have shown the most promise in early detection of the disease, with genetic testing opening the door to identification of high-risk patients, and a personalised, precise prevention and monitoring strategy for those individuals. Needless to say, when sophisticated biochemical and genetic tests lead to detection and diagnosis of more cancers in the population, the general incidence rate of cancer appears to inflate accordingly. Think back to the time when there were no sophisticated methods for screening for prostate cancer in men, or breast cancers in women. A large number of men and women who would have either gone on living their lives undiagnosed, maybe unaffected, or might have succumbed to a mysterious disease no one caught; now are getting handed early diagnosis of cancer thanks to the ever increasing efficiency of PSA tests and routine mammograms.

3.Obesity weighs heavily (sic) as a risk factor to cancer. As does an unhealthy lifestyle

While the scientific and medical community was busy improving the tools for cancer diagnosis and treatment, genetic screening, and furthering our understanding of the “emperor of all maladies”, the average Joe (yes, that’s you and me!) took it upon himself to take his lifestyle in the exact opposite direction!

With a terrible diet coupled with Johnny Walkers and Marlboros, a sedentary lifestyle and “Netflix and chill” as the preferred activity becoming the norm, the average global citizen’s lifestyle isn’t the most cancer-repelling (if you will).

Recent statistics indicate that over half the population in developed nations today is overweight or obese. Obesity, standalone, is an extreme risk factor for various cancers, with the American Society of Clinical Oncology (ASCO) heralding it as the front-runner in the race to overtake tobacco as the numero uno risk factor for cancer. Obesity is associated with a heightened risk for a plethora of cancers to choose from – postmenopausal breast cancer, cancers of the colon, rectum, oesophagus, pancreas, gallbladder, thyroid, kidneys and endometrial cancer to name just a select few.

That’s not all. Other lifestyle factors that can increase your cancer risk, include, but aren’t limited to:

While the incidence of tobacco-related cancer is declining, thanks to fewer and fewer people turning to cigarettes for reducing stress or upping their coolness quotient; breast, ovarian and some other reproductive cancers haven’t really gone down despite the introduction of HPV vaccines and conscientious screenings.

It’s well established that specific cancers have specific reasons for their occurence. The inclusion of quite a few “carcinogens” (refer the table shared earlier) has exacerbated the occurrence of related cancers. And it’s not just diet that is bringing about this “sudden” implosion of cancer diagnosis. For instance, women today have fewer babies, and breastfeed less – a lifestyle change that is strongly associated with an enhanced risk of breast cancer.

The scientific community has plenty of good news, though. Advancements in cancer research, genetic studies and clinical trials offer targeted, personalised regimes for cancer management in families, worldwide. There has been increasing awareness about predictive healthcare, newer drugs and high-precision diagnostic strategies. Watch this space (updates in <24 hours!) for part two of this series to learn about the latest health solutions in cancer.