A Simple Guide To Understanding DNA, RNA, Protein, And Genome 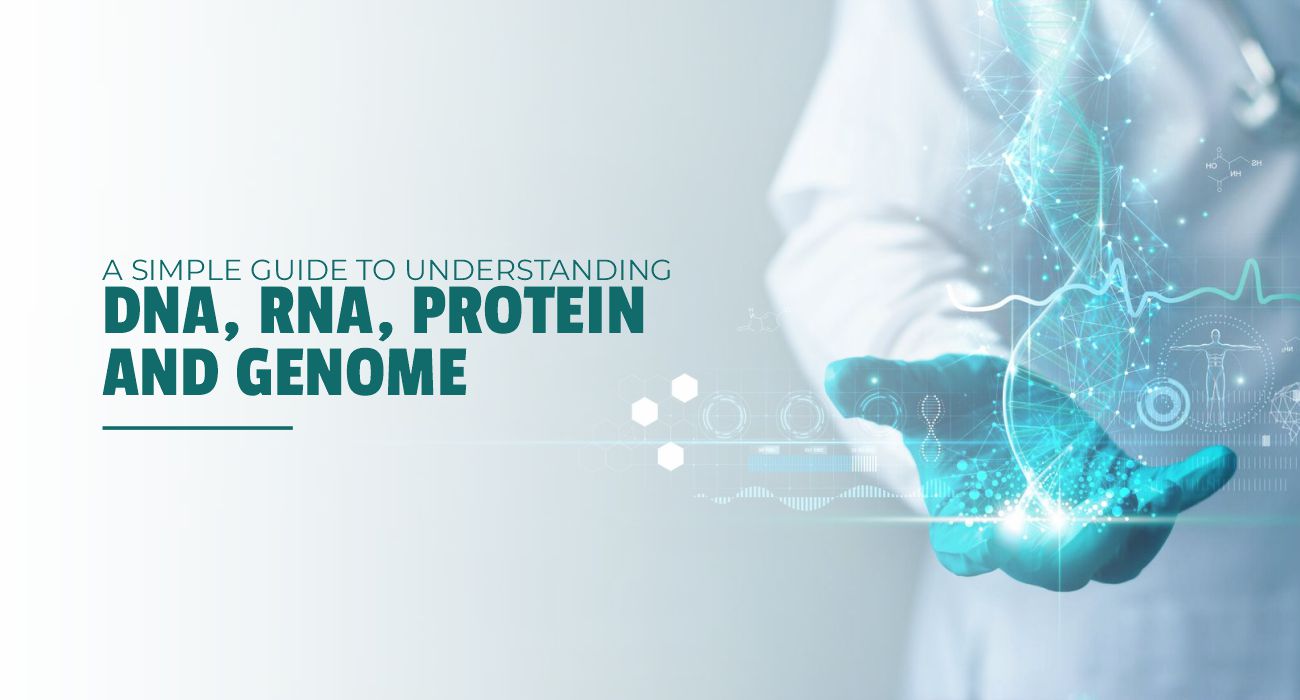 I was recently chatting with my daughter about Molecular Biology. I realised that several textbooks make it difficult to understand the science behind and as a result, everything seems complex. I have always enjoyed simplifying the complex. So this is my attempt primarily for high school students but also for healthcare professionals who were never taught molecular biology in detail.

Our body is made up of trillions of cells. According to recent estimates, they put this number at 30 trillion. Guess how many zeroes that are? 12 zeroes. A million is 6 zeroes so think of this as a million and another million. So basically a lot of cells. Each cell comes with an instruction manual that can be read in the microscopic world. This instruction manual is known as the genome. The manual has chapters that we call chromosomes, paragraphs that are genes, and then the tiny alphabet of four known as DNA.

So how does the same DNA get into all the 30 trillion cells?

Well, cells divide to make more cells. There is a process called Replication. Replication means copying. Sadly it is not as simple as putting a document in a xerox machine. There are some important players like enzymes that catalyses replication. Most enzymes end with an “ase”. The four important ones in replication are DNA Polymerase, Helicase, Primase and Ligase.  Complex sounding names but you can break them down to understand them better.

You remember that DNA is made up of 2 strands. In order to copy the DNA, you need to strip the double helix apart. The enzyme used to do that is helicase. It breaks down the hydrogen bonds between the two strands and there you have a single strand of the DNA.

Now we need a builder to complete this strand. DNA Polymerase comes to the rescue.   But it really doesn't know where to begin so that's where primase comes into the picture. As you may recall, a primer is usually what you find at the beginning of a book for instance. The primase tells the DNA polymerase where to begin. Then you need to put them all back together and here we use ligase to bind them together.  Voila! You now have 2 identical strands from the single one. And this process continues.

Now comes the more difficult question. How does each cell know what to do?  Remember the central dogma of life is DNA->RNA-> Protein

So How Does DNA Make RNA And Then Protein?

Let's start with a double-stranded DNA molecule. The genes contain the instructions for making proteins. We remember the four letters of the DNA code, namely A, C, T, and G. This is what we decode in Genomepatri and other products at Mapmygenome. So how do we go from an easy-to-read code of A, C, T, and G to complex proteins?

Making Of The mRNA

Then comes an enzyme called RNA polymerase that sits on one strand of DNA at the start of a gene and makes a messenger RNA. If you remember, RNA has A, C, G, and U . So A will pair with U and C with G while making the strand of mRNA. This process is called transcription. Now you may know words like medical transcription, and your school transcript. The word transcript comes from Latin, not that you need to know it. But it comes from two words, “trans” which means beyond or across, and “scribere” which means to write.  So in this case you are basically using the code of the DNA and making a transcript in the letters of RNA.

This is called an mRNA or a messenger RNA.
You may ask why messenger- It is because it sends a message to say it’s ready for translation. You may ask translation to what- the answer is protein. But how?

The mRNA moves out of the nucleus into the cytoplasm.

It is here that protein factories called ribosomes help bind with the mRNA to produce proteins. Proteins are made up of 21 amino acids and the ribosome essentially uses the template that the mRNA has and makes it into proteins. Now here is where I tell you that amino acids can be broken down into three base pairs called codons.

There is a role for another RNA called tRNA or transfer RNA. Their job is to carry amino acids to the factory, i.e the Ribosome. So imagine this. You have a RNA code for ACGU and now the tRNA reads 3 letters at a time instead of 1 at a time. This is an amino acid and the tRNA takes these amino acids to the Ribosomes where you keep using the amino acids that the tRNA brought and making a chain out of it. Once we have the whole chain, it folds into an interesting shape.

And that is how a protein is made.

Now, do you think you can make a human? Think about it!

Watch it to understand the basics of genomics