All About the Royal Disease- Hemophilia 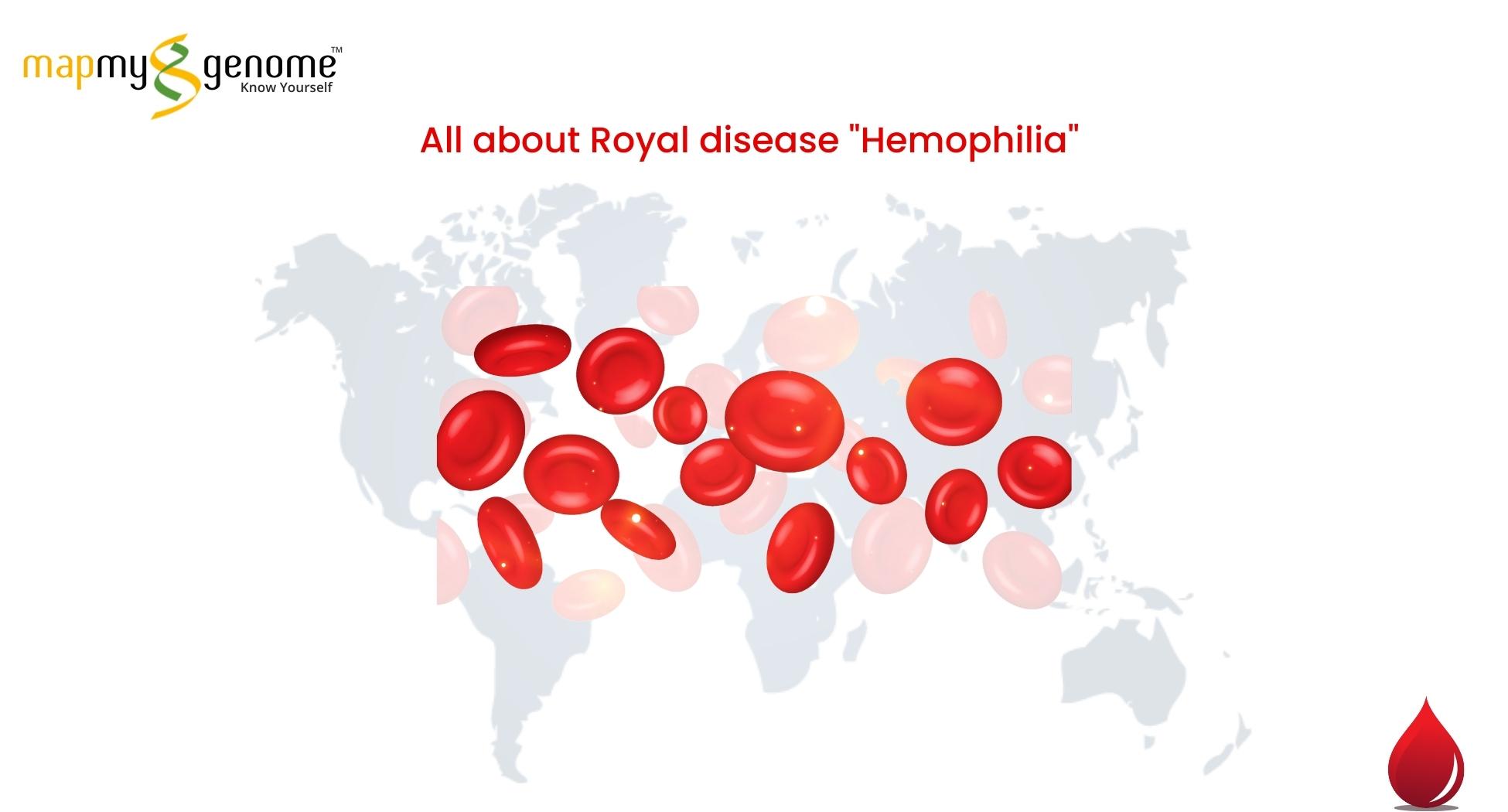 There is a reason Hemophilia is known as the Royal Disease. One of history’s most iconic queens, Queen Victoria, had a spontaneous mutation causing the blood disorder hemophilia. It is believed that the disorder was carried to the following three generations within the British Royal family. However, the recent research says that there is currently no history of hemophilia in the British Monarch.

The mutation in F8 and F9(factor VIII and factor IX) genes causes hemophilia. They provide instructions for making clotting factor proteins needed for blood clotting. The change or mutation in these genes can prevent clotting proteins from working correctly. As a result, hemophilia causes prolonged bleeding or paniful swelling of the joints.

There are different types of hemophilia. But, the following two are the most common:

The genes F8 and F9 reside on the X chromosome. So, hemophilia A and hemophilia B are X-linked recessive conditions. Since women inherit two X chromosomes and men inherit one, hemophilia tends to affect men frequently.  However, as carriers, women pass on the defective gene even when showing no disease symptoms.

The pattern of inheritance and the percentage of risk can be understood from the image below: 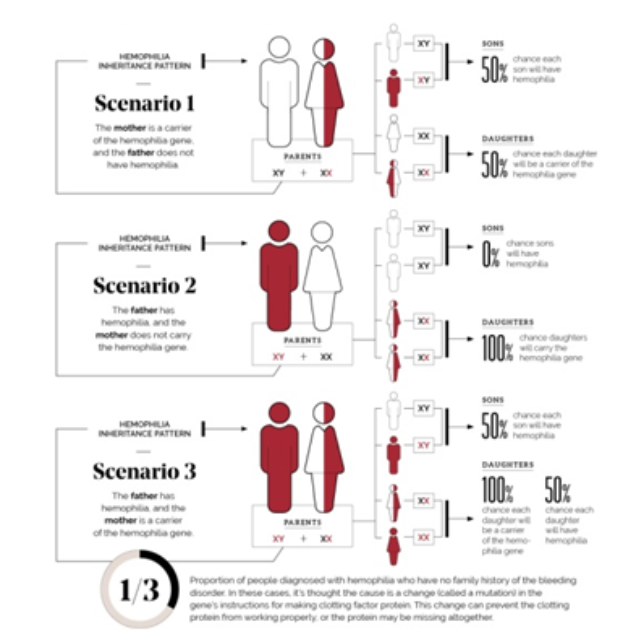 Signs and symptoms of Hemophilia

The signs and symptoms for both types of hemophilia are more or less similar. 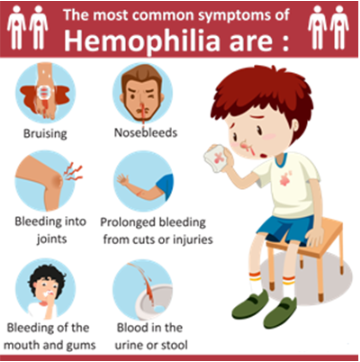 The diagnosis starts with examining complete medical and family history as hemophilia is an inherited condition. In children, severe hemophilia can be identified during infancy.

Hemoglobin levels are diagnosed through blood tests (CBC), as the count may be low if a person experiences unusually heavy or prolonged bleeds due to hemophilia.

Activated Partial Thromboplastin Time (APTT) test: This test measures the clotting abilities of factors VIII, IX, XI, and XII in terms of the number of seconds it takes for a clot to form in a blood sample. The result of the APTT test shows a longer clotting time among people with hemophilia.

Prothrombin time test (PTT): This test measures how long it takes for blood to clot by assessing blood clotting factors I, II, V, VII, and X. People with hemophilia A and B show normal results, as they lack factors VIII and IX, respectively.

The treatment plan depends on the type and the severity of the disease. The main treatment of hemophilia consists of replacement therapy. Human plasma concentrates or recombinant (produced from DNA) forms of the clotting factors VIII or IX are given to replace the blood clotting factors that are missing or deficient.

Newer treatments that use non-factor replacement therapies are available. Emicizumab is prescribed for routine prophylaxis to prevent or reduce the frequency of bleeding episodes.  Adults, children, and newborns can use Emicizumab to treat hemophilia A with or without inhibitors.

DDAVP (desmopressin acetate) is the synthetic version of vasopressin, a natural antidiuretic hormone that helps stop bleeding. In addition, aminocaproic acid prevents the breakdown of blood clots. It is often recommended before dental procedures and to treat nose and mouth bleeds.

How does Genetic counseling help?

A substantial portion of the genetic counseling session consists of patient and family education regarding the disease, diagnosis, and further complications. In addition, it gives an idea of how a particular genetic disease runs in the family and helps affected individuals to adjust to living with the condition.

Hemophilia A and Hemophilia B are X-linked recessive disorders. People affected with hemophilia can choose a  risk assessment through genetic testing based on their family history. Genetic testing of female relatives can also definitively distinguish between carriers and non-carriers of hemophilia. The severity of hemophilia and individuals’ perception of this severity influence individuals’ health choices. A genetic counselor can help them make informed choices about preventive steps against hemophilia.

In Mapmygenome, genetic counselors help you interpret family and medical histories to assess the chance of disease occurrence. They also help you expand your awareness about the disease, its inheritance pattern, management, and prevention.

Shaile Bandla is a DBT/Health sector skill council (HSSC)-India certified genetic counselor with specialization in genetic counseling and fetal medicine from Institute of Genetics and Hospital for Genetic Diseases. She has completed her Master's in Human genetics from Sri Ramachandra Medical College and Research institue, Chennai. Having worked in healthcare sector she is well experienced in prenatal, postnatal, fetal medicine,reproductive, infertility genetics, New born screening and adult onset genetic diseases.