Alzheimer's Disease Is Much More Than Forgetfulness... 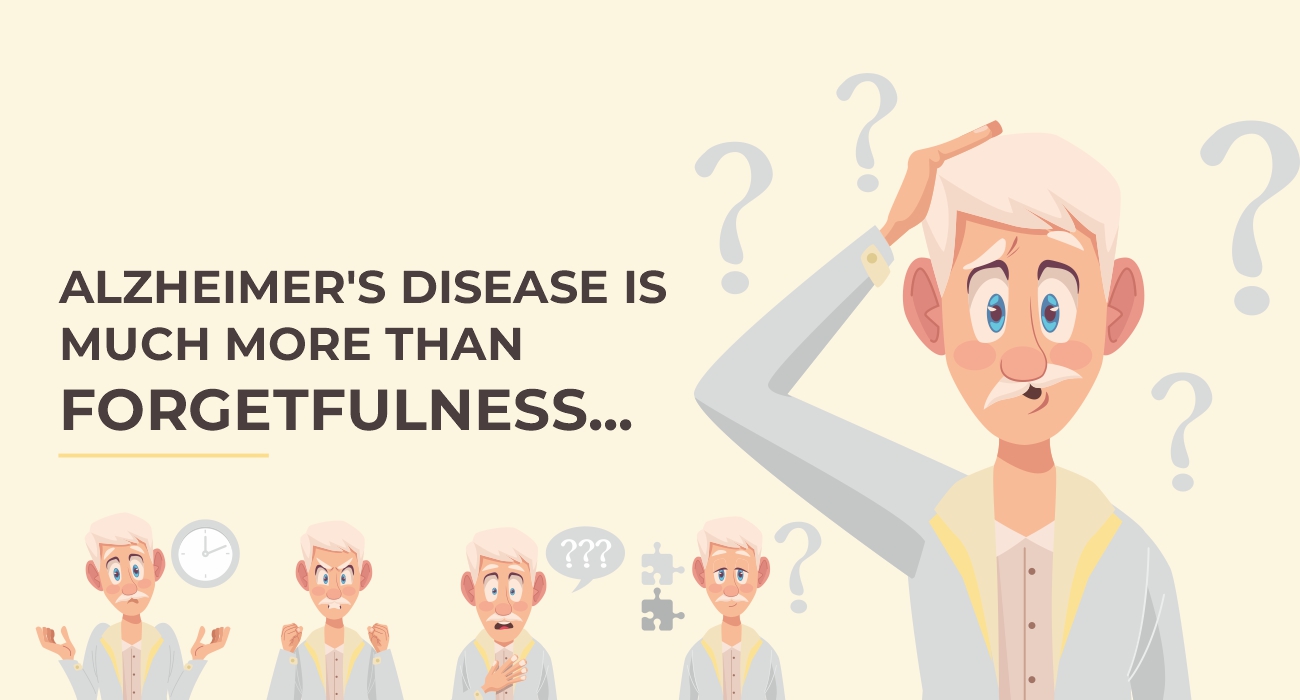 I remember first seeing "Still Alice" in 2015, a movie starring Julianne Moore who plays the protagonist diagnosed with early onset familial Alzheimer’s disease after her 50th birthday. This was the first time I was able to truly understand the impact of the disease on the individual and its effect on family members. In India, approximately 4.1 million people are currently living with dementia. It is the primary cause of chronic disability among the elderly community, and the number will double in the next 20 years (Lalu et al 2018).

Dementia is a general term used to describe decline in mental ability that is severe enough to affect daily life. One of the most common causes of dementia is Alzheimer’s disease. Alzheimer’s disease is a neurodegenerative condition resulting in progressive loss of memory and cognition. Alzheimer's disease is a neurodegenerative disease which is the most common form of dementia. It is a progressive disease beginning with mild memory loss and possibly leading to loss of the ability to carry on a conversation and respond to the environment. We are still trying to understand the causes of Alzheimer’s disease. Scientists have identified that age is the best-known factor of Alzheimer's disease. Having a family history of Alzheimer's disease increases the risk of developing the disease in the individual. Other risk factors include Medical history of uncontrolled Type 2 Diabetes or hypertension, diagnosis of mild cognitive impairment and a history of traumatic brain injury. Researchers are studying whether education, diet, and environment play a role in developing Alzheimer’s disease.

The early signs of Alzheimer's disease include: 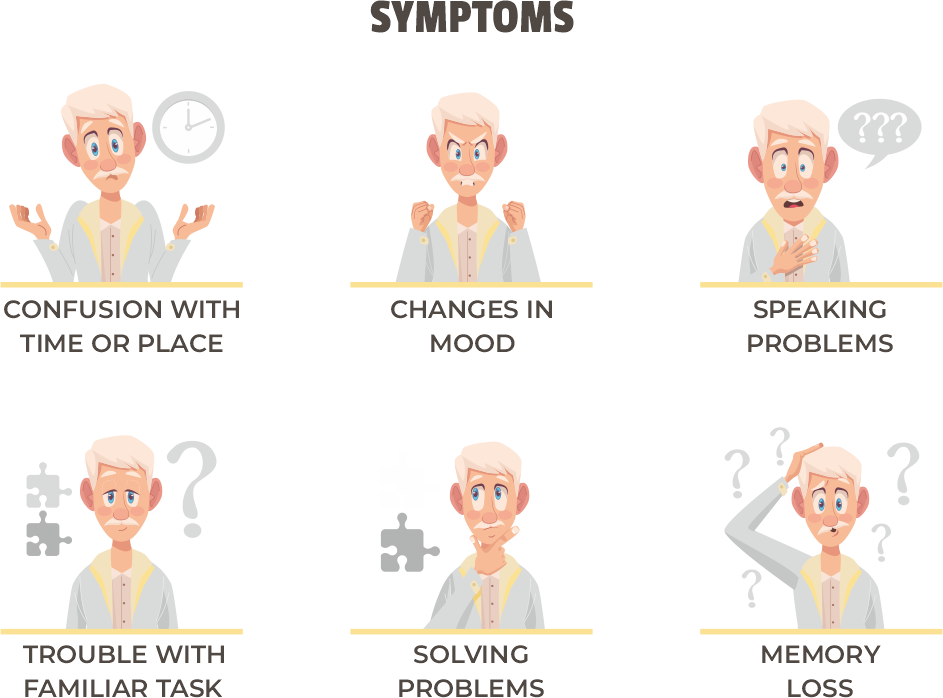 Dr. Alois Alzheimer noticed changes in the brain tissue of a woman who had died of an unusual mental illness in 1906. She was presented with memory loss, language problems, and unpredictable behavior. On autopsy, she was found to have abnormal clumps (now called amyloid plaques) and tangled bundles of fibers (now called neurofibrillary, or tau, tangles). These plaques and tangles in the brain and the loss of neuronal connections in the brain are considered some of the most common features of Alzheimer’s disease. You can watch a short video below to understand how it affects our brain cells

Alzeimer’s disease is diagnosed by a series of tests. Your doctors conduct tests to assess memory impairment and other thinking skills, judge functional abilities, and identify behavioral changes. They also perform a series of tests to rule out other possible causes of impairment. These tests may include brain imaging such as brain MRI, CT or PET scans; tests for cognitive and memory skills and neuropsychological tests to identify brain conditions and mental health conditions. There may be blood tests to understand the biomarkers related to the disease. In addition, in some cases, your doctors may interview your close family and friends. It's common for you to feel nervous if you are facing memory concerns or your loved ones are facing similar issues. Often family members or individuals with memory loss try to hide their symptoms. While we do not have a cure for Alzheimer’s disease today, an early diagnosis can often help to manage the symptoms and identify other potentially similar diseases which can be treated.

Alzheimer’s is a progressive disease, the time from diagnosis to end-stage disease can be variable ranging from as little as three or four years if the person is older than 80 when diagnosed, to as long as 10 or more years if the person is younger. Initial symptoms can begin with difficulty in driving a car, and difficulty in paying bills. they may ask the same questions over and over, get lost easily, lose things or put them in odd places, and find even simple things confusing. As the disease progresses, some patients may present with emotional responses such as people becoming worried, angry, or violent.

Many individuals diagnosed with dementia have no indication of the risk until the onset of symptoms. Due to this individuals diagnosed with the disease may not have planned financially or logistically for their future care. In addition, it gives the individual and their family less time to cope with the diagnosis. Knowledge can be powerful when it can be used in a constructive manner to make an actionable plan for their future. Prior studies have shown that people who choose to learn about genetic causes for Alzheimer’s disease have used this information to:

Genetic testing may be able to identify the cause of the disease and the risk for developing the disease. However, it cannot predict the age of onset or the severity of the disease for an individual. At this time there is no cure for Alzheimer’s disease. Learning about the presence of genetic mutations that increase the risk of developing Alzheimer’s disease can be stressful. For some of us, it may also increase the risk for mental health illnesses such as anxiety or depression.  For this reason, when healthy (asymptomatic) individuals who have a family history of Alzheimer’s disease wish to learn about underlying genetic causes, it is recommended for them to undergo extensive genetic counseling.

Genetic counseling can help individuals understand the risks, benefits and limitations of testing. Genetic counselors can help anticipate what to expect from the test and facilitate informed decision-making regarding the test and its outcome. In addition, a referral to a psychologist or therapist may be made as and when necessary to receive long-term psychological support.

While we do not understand how to prevent the onset of Alzheimer’s. We have identified that a healthy lifestyle may help reduce your risk of developing Alzheimer’s disease. Two large, long-term studies indicate that adequate physical activity, a nutritious diet, limited alcohol consumption, and not smoking may help people. In addition, a healthy brain aging process can help in reducing the risk of developing Alzheimers. Studies have shown that keeping our brain active by challenging your brain on a daily basis, which can be done by learning a new hobby or skill or using daily brain trainers such as sudoku or word teasers can help in reducing the risk. In addition, socializing on a regular basis has been shown to be beneficial.

Even though the incidence of the disease is high in India, patients and caregivers face many challenges.

Alzheimer’s disease can be a difficult, isolating disorder to deal with for the patient. In addition, it may be also challenging and overwhelming for the caretaker or families of individuals with Alzheimer's disease. As a society, we need to develop better support systems, increase awareness of neuropsychiatric conditions and emphasize scientific research in advancing the early diagnosis, management and cure for dementia.

Genome testing cannot tell for certain if you develop Alzheimer’s or not, however, genetic testing is useful to estimate your risk. Mapmygenome’s Genomepatri, DNA-based health, and wellness give you a comprehensive assessment of your genes that helps you learn about your susceptibility to conditions like Alzheimer’s disease.

Mapmaygenome’s next-generation sequencing solution Whole Exome Sequencing is another tool to get an extensive insight into familial Alzheimer’s disease that is for certain linked to genes and helps to understand the early onset of Alzheimer’s disease.