Blood Testing:  From Humours to Tumours 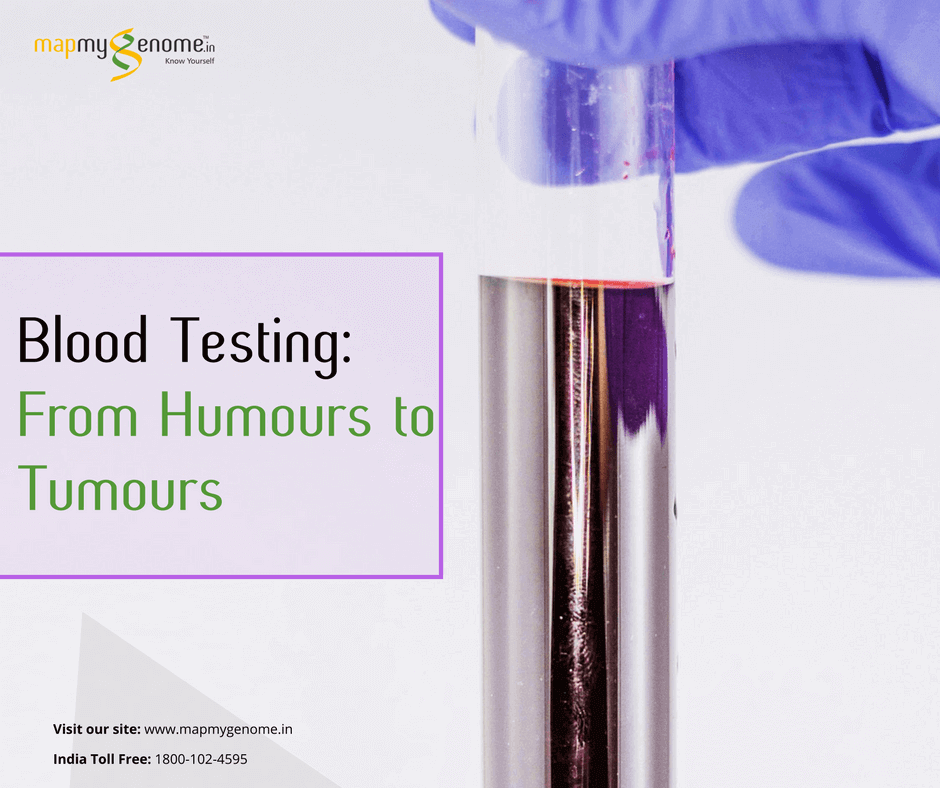 Liquid Biopsy is used and misused a lot these days. While we all are still on the lookout for the holy grail, there is a lot we can do with a small drop of blood. Speaking of which “A small drop of blood” evokes two memories for me- “Gattaca” the movie and “Theranos” that promised the world a lot with a prick of blood. Gattaca’s trailer with these prophetic words of “A mere drop of blood can determine who you are, what you can be and who you can marry.” While we are not just there yet, we can see from history that so much has happened in the course of a couple of thousand years with blood. Today we can do a genetic test like a Genomepatri, an exome analysis, whole genome analysis, noninvasive test popularly known as NIPT on pregnant mothers to detect chromosomal abnormalities and detect circulating tumour cells to give us some early signs of cancer and so much more. These have the potential to get better over time and in a few years, we will get much closer to precision medicine than we are today.

Perhaps we need to understand history and how blood testing has come to this point.  The beauty of science is that we evolve. The truth is that as this body of knowledge develops, we get to stand on the shoulders of giants to be able to see beyond.

A couple of thousand years ago, our body was thought to be made up of 4 humours in western science that included blood, phlegm, black bile and yellow bile. The word “Ayurveda”  meaning “the science of life” postulated that an individual is comprised of three types of energies – Vata, Pitta, and Kapha. Knowledge of this science was helpful in creating a balance of the mind, body, and consciousness through lifestyle modifications.  The concept of balance seemed familiar globally even then. Aristotle had mentioned that the four building blocks were air, water, earth and fire that are pretty much the same as the five components in Ayurveda that had air, water, earth, fire, and ether.

For a long time after that, there seemed to be a lull in developing the concept of blood as a testing means. William Harvey (1578–1657) discovered the circulation of blood and a lot of mechanical explanations came up during that period. A few years later, Cornwall did one of the earliest blood transfusions paving the way for medicine ahead.  Matthew Dobson’s proof that the sweetness of blood serum in diabetes is caused by sugar (1776) was also incredible milestones. In the late 1800’s, there was a lot of work done on infectious diseases including TB, cholera, typhoid, and diphtheria. In less than a decade after that,  lab tests to detect them were introduced.

In 1901 the first blood group classification took place that determined the A, B and O groups by the Austrian scientist Karl Landsteiner. He looked at presence or absence of the A or B antigen. He received the Nobel prize in 1930 for this landmark achievement. In 1902 the fourth type AB was discovered by two scientists Alfred von Decastello and Adriano Sturli.

Since we did not have “google” and other search engines, it was later found that a Czech serologist Jan Jansky had also discovered this classification system, but his name in history is not at the same level as Landsteiner as happens with many scientific discoveries. Eventually, he did get some credit for the current classification system.

In 1907 doctors decided to start using this classification for blood transfusions. Ludwik Hirszfeld and E. von Dungern discovered the heritability of ABO blood groups in 1910–11. Felix Bernstein demonstrated the correct blood group inheritance pattern of multiple alleles at one locus in 1924.

Dr. Robin Coombs was a British immunologist who in the 1940’s invented a blood test that bears his name and a version of which is still widely used to diagnose some kinds of anemia.

In the year India was getting its independence 1947, it became necessary to do a blood test for syphilis before getting a marriage license.

In the 1960s, we saw the advent of the first strips for testing blood glucose. In 1971 blood tests could screen for hepatitis. In 1973, the TSH test was introduced for Hypothyroidism.  HIV was added in 1985, and so the list goes on. Chromosomes were first observed in plants in 1842 and then animals forty years later( interestingly in the salamander). Towards the early 20th century, scientists found a revelation that showed that chromosomes were the carriers of genes. Today we know that the number of chromosomes is 46 in humans, but for almost 30 years, it was assumed to be 48. Today  Chromosomal analysis ( karyotyping) is done in hundreds of labs with an accuracy that is far more superior than it was many years ago.

Today’s DNA testing with blood went through several iterations of blood typing, serological testing, HLA testing, PCR, RT PCR, SNP arrays, Next generation sequencing and more to come to this point. These would include tests for newborn or carrier screening, exome analysis for specific conditions, targeted panels or whole genome sequencing. Very recently we heard about the liquid biopsy.

Today most expecting parents are aware of the prenatal test known as the NIPT test that looks at the DNA from the baby’s placenta found in the mother’s blood to see if you are likely to have a higher risk of giving birth to a baby with a genetic disorder. Today it usually covers the most three standard conditions, but with the advances we see in literature, this is likely to increase soon.

Liquid biopsies have been the catchword for the last 2-3 years to diagnose tumours based on a simple blood test. Billions of dollars have been spent on research and development of liquid biopsy based tests for cancer and another disease. A lot of this revolves around detecting and analyzing “circulating tumor DNA,” genetic material that’s released from dead cancer cells, something scientists first noticed in 1977. These can be rare and tiny, so detection techniques have been far more superior than ever discovered. Given that cancers progress quickly if this works, we wouldn’t have to take tissue samples from patients, and it would be relatively cheaper and risk-free.

While the most common liquid biopsies are circulating tumour cells used for the early detection of cancer, CEC ( circulating endothelial cells) for heart attack diagnosis and also cell free fetal DNA for prenatal diagnosis. The NCI ( National Cancer Institute) says that liquid biopsy may also be used to help plan treatment or to find out how well treatment is working or if cancer has come back. Being able to take multiple samples of blood over time may also help doctors understand what kind of molecular changes are occurring in a tumor.

If I may be allowed to speculate on the future of blood testing, I think it will be noninvasive ( finger prick or less), more accurate and home based and connected to your devices at all times and the people you want to share your data with will probably have it in real time. Consumers will be making more lifestyle modifications compared to drugs. CEO of Mapmygenome India Limited, a genomics company whose vision is to touch a million lives using genomics.

She is a distinguished alumna of IIT Kharagpur. She has two Postgraduate degrees in Physics and MIS from the University of Illinois.