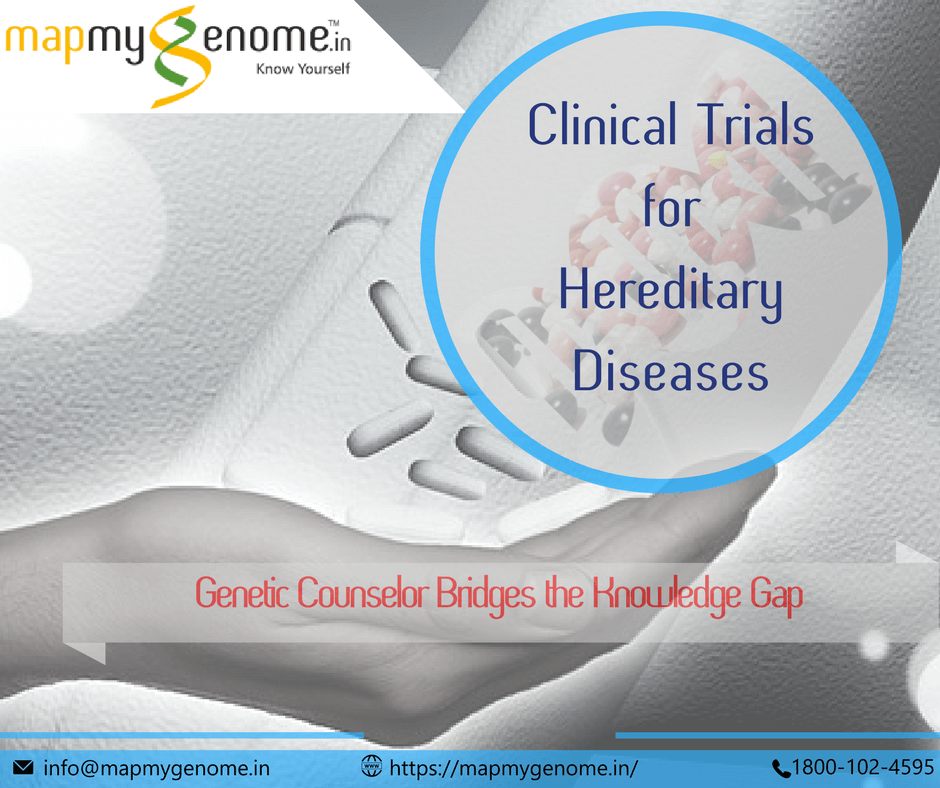 Clinical trials, according to World Health Organization (WHO), are prospectively assigned human participants to one or more health related interventions to evaluate their effects on health outcome.

Since most of the genetic diseases do not have a cure as yet, patients and their family members are always on a lookout for any new clinical trials, which could help alleviate some of the symptoms and improve the quality of life of the individual diagnosed with a genetic disorder. Genetic counseling can bridge the knowledge gap between researchers and the patient regarding ongoing clinical trials for a genetic disorder; can help in confirmation of genetic diagnosis (by testing), assess the feasibility and eligibility of inclusion into a trial, gaining better understanding on the type of trial (observational/ interventional) and other technicalities (blind study/ use of placebo); and can provide a realistic view on how the patient may be benefited, if at all, from enrolling him/herself into a specific clinical trial.

Under the guidance of Dr. Risha Nahar Lulla (PhD, BGCI Senior), the Principal Genetic Counselor at Mapmygenome, I had the opportunity to conduct a comprehensive study on the types of ongoing clinical trials for genetic diseases, such as Duchenne muscular dystrophy and ataxia telangiectasia.

Randomization refers to the process in which each study subject is randomly assigned to receive either the study treatment or a control. Placebo is another common term in clinical trials. Placebo is defined as a pharmacologically inert substance given to please the subjects. There are a lot of trials that use blind for their evaluations. There are two kinds of blind studies. If the study is single-blind, the subjects involved in the study do not know which study treatment they receive.  If the study is double-blind, the researchers also do not know which treatment is being given to a subject. This blinding helps in preventing biases in the study.

Before starting a clinical trial, pre-clinical trials are performed. This phase explores the  pharmacological profile of a prospective drug and is performed on isolated organs, bacterial culture, and animal models of human diseases.

Pre-clinical toxicity studies are done to determine some important information, such as:

There are many ethical requirements for a clinical trial. The U.S. National Institutes of Health notes seven ethical requirements that must be met before a clinical trial can begin. These include social value, scientific validity, fair and objective selection of subjects, informed consent, favorable ratio of risks to benefits, approval and oversight by an independent/ institutional review board (IRB), and most importantly respect for human subjects. It’s important for any clinical trial to have good laboratory practices, clinical practices, manufacturing practices, documentation practices, and regulatory practices. A clinical trial can only begin when it is approved by the drug regulatory authority. The different drug regulatory authorities are:

After the pre-clinical trials are done, the drug regulatory authority approves the intervention for clinical trials. The first phase, i.e., the Phase 0 is known as micro dosing. In this phase, extremely low, non-pharmacologically active doses of a drug are used to define the agent’s pharmacokinetic profile in humans. The main advantage of this step is that it takes less time, saves investment, and enables utilization of proper resources. On the other hand, no therapeutic or diagnostic conclusions can be made.

Next comes the Phase 1. It involves around 20-50 subjects and the duration is for 1 year. They require healthy volunteers or volunteer patients, according to the class of drug and its safety. The objectives are the Pharmacokinetics and the Pharmacodynamics.

Phase 2 occurs when Phase 1 is successfully cleared. In this, around 50-300 subjects are needed and the duration is usually for 2-3 years. The volunteers required in this phase are patients. These trials have specific inclusion and exclusion criteria. The objectives are pharmacokinetics and pharmacodynamic dose-ranging and therapeutic efficacy.

Phase 3 follows after Phase 2 is approved. It is randomized double-blind. This involves around 250-1000+ subjects who are patients. Phase 2 focuses on the efficacy on a substantial scale and safety, comparison with existing drugs, different drug interactions, and guidelines for use of drug.

If phase 3 results meet expectations, application is made for permission to market the new agent. The marketing approval requires submission of a New Drug Application (NDA) to the Drug Regulatory Authority. The application contains, often in hundreds of volumes, full reports of all pre-clinical and clinical data pertaining to the drug under review and package inserts. The median standard approval time is 12.9 months.

Phase 4 has an approximate subject count of 2000-10000+. This is a post-licensing study. The surveillance for safety and efficacy is done. It is tested for uncommon and long-term adverse effects and marketing studies, as well as pharmaco-economic studies with additional indications.

The final and the last step is the Phase 5. The focus of Phase 5 studies, or effectiveness research, is in determining whether the therapeutic effect is realized in day-to-day clinical practice. Generally, Phase 5 research is considered field research or community-based research and is designed to test generalization of the intervention to a larger sample and under typical and somewhat variable clinical contexts.

The Case of Ataxia Telangiectasia

One of the cases referred to Dr. Risha Nahar was of a five-year-old boy suffering from a rare, neurodegenerative genetic disorder known as ataxia telangiectasia. Two years ago, molecular genetic sequencing had identified a novel homozygous pathogenic stop/ terminating variant (c.140C>G; p.Ser47Ter) in the ATM gene, thus confirming the clinical diagnosis of ataxia telangiectasia in him. The child’s older brother, who was also suffering from ataxia telangiectasia, passed away at the age of five years due to severe recurrent lung infections. The boy’s parents revisited Mapmygenome’s Genetic Counseling Clinic, as they were keen to know if there are any newer treatments or cure for the condition.

Ataxia telangiectasia impairs certain areas of the brain including the cerebellum, causing difficulty with movement and coordination. It weakens the immune system, causing a predisposition to infections and it prevents repair of broken DNA, increasing the risk of cancer.

We reviewed various clinical trials being conducted that could help this child. As there is an increasing number of targeted therapies for genetic diseases under trials, one of the most important inclusion criteria is the confirmation of the disease diagnosis by genetic testing that reveals the causative molecular genetic defect(s). Some of these therapies include small molecule read-through compounds (such as PTC124, RTC13, RTC204, RTC219, GJ071, GJ072) which are known to be most effective for patients who have a non-sense or stop mutation.

During the genetic counseling session, the parents were made to understand the nature of the different types of ongoing clinical trials and were provided with a summary of the successful trials that showed promise. Appropriate referrals to pediatric immunologist and pediatric pulmonologist were made (in view of recurrent infections, evaluation for immunodeficiency IVIG replacement therapy ). The parents were also given information on the various support groups all the over the world that help patients suffering with ataxia telangiectasia. After the brief session with the family, we got onto the task of reaching out to the Research Heads of a few ongoing clinical trials, providing them a clinical case summary.

Ideally, one would hope the successful enrollment of such children, into a phase 3 or phase 4 trial that is aimed at preventing associated neurodegeneration and cancers that are commonly associated with ataxia telangiectasia.