DNA and Ancestry: A maternal perspective 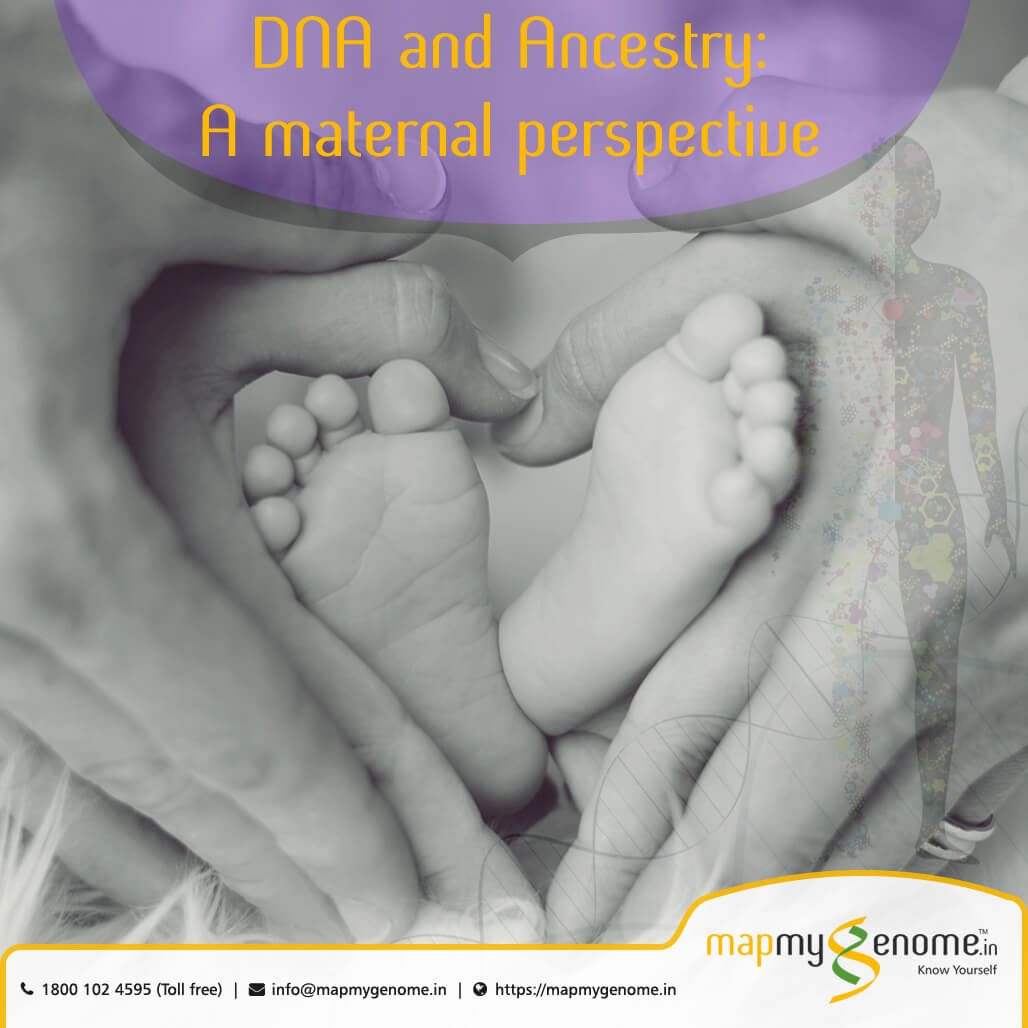 Have you ever thought of tracing back your origin to find out your ancestors?

It’s worth a thought! I mean… how fascinating would it be if you got to know that your ancestors were from Africa or from some other part of the world? Say whaaaaaaaat?

Well, you see, in ancient times, there existed the “Gotra” system, that associates people who are descendants from a common male ancestor. This system was started amongst the Hindu community with a thrust to identify the families in the community. The “Gotra” system followed by ancient people helped in identifying the male lineages and was passed on from father to son, while the daughters wouldn’t carry this forward with them. This system is still prevalent in the Indian context, which begs the question – Is the male lineage alone enough to identify one’s heritage and ancestry? What about the chunk of hereditary material you got from your mom?

Ahem…Since that debate takes on a tinge of socio-cultural dogmas, we would not answer that question directly, though we all know that you can’t do without both sides of the coin (oops, did I just give away my stand on this?!). I’d keep this discussion strictly to the fact that today, with the help of modern genomics, you can trace back your maternal lineages also.

Matrilineality, also known as maternal ancestry, is tracing back ancestors through your mother’s lineage. This helps in predicting genetic ethnicities and finding new family connections. Let’s find out how it’s done!

In a purely genetic context – What’s the one thing that your mother passed on to you that your dad just couldn’t (even if he really wanted to)? Indeed! the mighty mitochondria. Mitochondria is a crucial part of every cell and is mainly responsible for providing energy. An individual’s mitochondrial DNA can be used to trace their maternal ancestry. Mitochondrial DNA or mtDNA is inherited  only from the mother and is transferred from mother to offspring. While the mitochondrial DNA transferred to a male offspring does not pass on through to the next generations, mtDNA gets passed on from mother to daughter to grand-daughter to great-grand daughter to...you get the gist. The infrequency of alteration in the genetic makeup, being one of the unique features of mtDNA, has helped in exploring genealogical relationships among individuals and to study maternal ancestry and population history of different regions. In the present era of high throughput sequencing technologies, the data from mtDNA has been widely used to explain the history of human population. Why, you ask? Well, as it stands the rate of changes occurring in mtDNA is very low when compared with the rate of occurrence observed in the Y chromosome DNA (that helps in identifying the paternal ancestral lineages). This high (and rather variable) rate of change, makes it a big challenge when it comes to mapping the exact dates of splits in the human population, when mapped solely on paternal ancestral lineages.

Let’s talk about some cool theories on ancestry, population evolution , etc. Did you know that you can find out whether your ancestors were from Africa or some other part of the world? Many anthropologists and researchers propose that modern humans evolved in East Africa between 400,000 and 200,000 years ago. After a point of time, this population dispersed and migrated, out of Africa, to other parts of the world. This dominant model describes the geographic origins and early migration of Homo sapiens, and is known as the “Out of Africa” theory. The diversification of human genetic makeup following the migration out of Africa occurred due to many factors such as change in diet, climatic and living conditions. Now that really sounds… out of the world!

Mitochondrial DNA is inherited without any recombination. The only mutations observed in mitochondrial DNA occur during DNA replication. A survey of mitochondrial DNA, conducted in the year 1987, inferred that all mitochondrial DNAs originated from a single ancestor who was postulated to have lived approximately 200,000 years ago in Africa. A comprehensive analysis and strong inference of the evolutionary tree was produced to show how the present-day population has been derived from a single female ancestor, Mitochondrial Eve. Studies showed that Mitochondrial Eve lived in Africa and her descendants started migrating out of Africa. As more and more data became available, the branches of the evolutionary tree were labeled with alphabetic letters, now known as mtDNA haplogroups. The prediction of ancestry goes like this – through the results from the mtDNA studies, the variations in the genes (mutations) are looked into; depending upon the mutations occurred, the haplogroups are marked and studied, thereby bringing insight into the interesting facts where our ancestors have migrated across geography and time. At the start, I did mention that with the advent of sequencing technology and genomic analysis, anyone can dive deep into their maternal ancestry. Now that I’ve grazed the surface of the scientific basis of embarking upon this journey through time via the DNA medium, let me very briefly tell you just how easy it is to book tickets for this vacation! Well easy for you…arduous (but exhilarating) for analysts like me.

For DNA testing, cheek swab or blood samples are collected from you. The mitochondrial DNA is studied and the analysis is done by looking at some specific genetic changes that help in finding the haplogroups. The genetic makeup is inferred by comparing your genetic information to a reference database. By doing so, you will be able to learn some interesting facts about your ancestors, such as origin of the haplogroups and migration of different haplogroups. Isn’t that interesting?

Recent studies showed that all populations in India displayed an evidence of genetic mixture of two ancestral groups, Ancestral North Indians (ANI), who are close to Europeans and Central Asians, and Ancestral South Indians (ASI) who are easily distinguishable from North Indians and East Asians. These results prove that the present-day Indian population is a mixture of different demographic groups.

What do you think about this? Surprising piece of information or was it somewhat expected? Do let us know in the comments section below.

To end this, I would try to stay away from big statements, supposedly unequivocal opinions on the subject, or clickbait worthy statements – which seem to be the order of the day when it comes to blogging these days. “You must end on a high”. Bah! Here’s the deal…

The only thing which is certain in the context of DNA and the ever expanding cosmos of genetic data, is the irrefutable fact that the information decoded from mtDNA will continue to be important in various dimensions of human population studies through the years.