Genetics and Alzheimer’s Disease : Mind it! 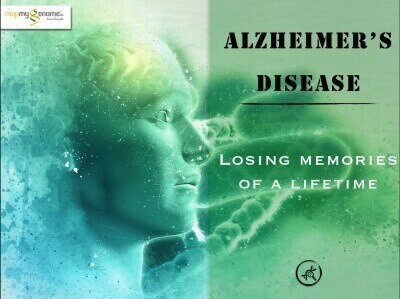 Alzheimer’s disease is the leading cause of dementia. It has become more common due to increase in life expectancy. Alzheimer’s disease is a neurodegenerative disorder that is irreversible and progressive; characterized by slow episodic loss of memory and loss of cognitive function such as thinking skills in late stages of the disease. In some cases, individuals may present with psychiatric issues, seizures or symptoms similar to Parkinson’s disease. Dr. Alois Alzheimer first identified this condition in 1906 when he noticed changes in brain tissue of a woman who was reported to have memory loss, language problems and died of mental illness.

It is suspected that the changes in the brain and damage to the neuron begins about a decade before symptoms such as memory or other cognitive problems appear. Typically, abnormal deposits of proteins referred to as amyloid plaques and tangled fibers known as ‘tau’ can be observed in brain cells. As brain cells (neurons) are damaged, parts of the brain may shrink.

Alzheimer’s disease is most commonly diagnosed in the mid-60s. Initial symptoms of AD include memory problems. Some individuals are diagnosed with Mild Cognitive Impairment or MCI. MCI is defined as changes in cognition and memory loss that does not interfere with their everyday life. Individuals with MCI may go back to normal cognition. However, for some individuals, MCI progresses to dementia. Typically, individuals have clinical symptoms for 8-10 years.

Common symptoms of Alzheimer’s disease include:

Wandering or getting lost

A definitive diagnosis can only be made, posthumously, after a brain autopsy which can identify the abnormal protein deposits in the brain (amyloid plaques and tau fibers). A clinical diagnosis prior to autopsy confirmation is correct in about 80-90% of cases.

To make a clinical diagnosis of Alzheimer’s disease, physicians may : Three genes that are known to cause EOAD are APP, PSEN1 and PSEN2. However, it is possible that there are other genes that causes EOAD that are not yet identified.

Unlike the three causative genes, APOE gene is found to increase susceptibility for Alzheimer’s Disease. There are three forms of APOE: e2, e3 and e4. The e4 type of APOE gene is found to be associated with an increased risk of Alzheimer’s disease. About 50-70% individuals diagnosed with Alzheimer’s disease are found to have at least one copy of the APOE e4 gene. There is a higher chance of identifying APOE e4 in individuals diagnosed with Alzheimer’s who also have a family history of the disease. The risk of developing AD for individuals with one or two copies of APOE e4 varies with age and gender. Inheriting one or two copies of the APOE e4 gene increases the risk of developing AD however, it does not guarantee the development of the disease. Inheriting no copies of APOE e4 does not rule out the possibility of Alzheimer’s disease. Inheriting two copies of the APOE e4 increases the risk further, however this risk is not 100%.

Data shows that inheriting APOE e2 gene copy may be protective against the risk of developing Alzheimer’s disease.

Treatment for AD is supportive in nature, aimed at slowing down it’s progression. There is, currently, no medical intervention to prevent the development of plaques or tau. Early diagnosis, however, can open opportunities to participate in clinical trials researching possible new treatments for Alzheimer’s disease. Additionally, caregiver training and supportive environment can help in managing some behavioral issues such as depression, aggression, wandering or sleep related issues.

The utility of genetic testing for Alzheimer’s disease has been debated for a long time. On one hand, it can provide clarity on the diagnosis for families when a genetic mutation is identified. This can facilitate accurate assessment of the chance of inheritance and possibility of developing symptoms. On the other hand, in some cases, genetic testing can identify genetic changes that may add to the existing diagnostic uncertainty. Further, there are valid concerns that genetic testing in healthy individuals with a family history of Alzheimer’s disease may trigger negative psychological responses such as depression, anxiety and in some cases, suicidal tendencies. It is for this reason that pre-test genetic counseling is a part of the genetic testing process for AD. Genetic counselors are health care specialists with expertise in medical genetics and psychological counseling and play a critical role in facilitating genetic testing.

In particular, APOE e4 gene testing for predicting the risk of Alzheimer’s disease is not routinely offered by clinicians. Many international consensuses recommend against APOE testing for the risk prediction of Alzheimer’s disease on account of the lack of preventative measures and unclear risk for the disease. The risk associated with APOE e4 varies between large studies and can differ based on factors such as gender, ethnic group, environmental exposures, further complicating interpretation of an individual’s genetic risk.

Having said that, studies have also identified that healthy individuals who sought genetic testing reported feeling more in control, and used the information gained from genetic testing to arrange long term care and life planning. In addition, health behavioral changes such as use of dietary supplements and lifestyle changes were reported.

To reiterate, genetic counseling prior to and post genetic test is strongly recommended for individuals seeking information on genetic mutations. Further, a neurological and psychiatric evaluation is recommended. Such steps help an individual make an informed decision by evaluating factors such as psychosocial, social, family history and financial factors that can influence the decision. Finally, a Genetic Counseling appointment can help individuals anticipate types of results, and assess the implications of results for themselves as well as for their family members.

A genetic counselor is a specialized health care professional who has expertise in medical genetics and psychological counseling.