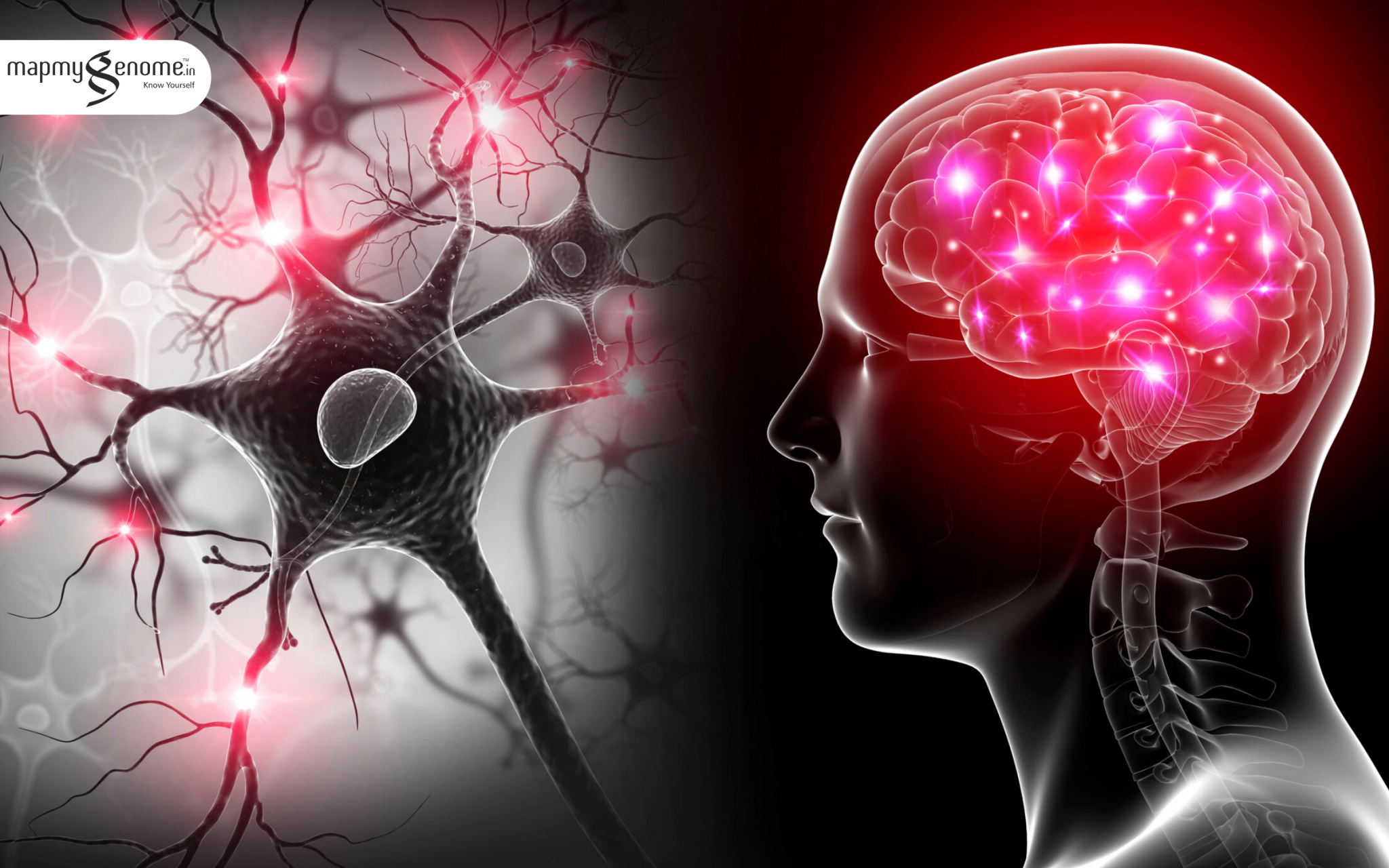 Brain health, like any other aspect of health, is an interplay between genetics, epigenetics, and behavior. Epigenetics is a set of instructions that are “on top of” our genetic code, but instruct the DNA sequence on how to act by adding some tags. Some of these tags are like “start–stop” sort of instructions, while others are more like a knob of varying intensity telling how much to express. These tags can be removed or even passed on for generations. My key learnings from looking at brain health through a genomics lens are:

The Brain is a fascinating organ. Let me try and explain some of the interesting parts of the brain in order to understand some of the genetic jargon that I will share in this write-up.

The 3 main components of the brain are cerebrum, cerebellum, and the brainstem.

Cerebrum: You have probably seen or used the word “cerebral”. It derives its meaning from cerebrum. It is the largest part of the brain with left and right hemispheres connected by the Corpus callosum, a bundle of nerve fibres. This has the tough job of interpreting touch, vision, and hearing, as well as speech, reasoning, emotions, learning, and fine control of movement. I am sure you have come across the left brain and the right brain and how each one of us has some inclination one way or another. The important thing to remember is that the left brain controls the right part of our body and vice versa. Each of the hemispheres is divided into 4 lobes called frontal (abstract or complex thought), parietal (sensory), occipital (visual), and temporal (connects the parietal and occipital and is responsible for sound and speech). There are a lot of things that influence brain health. The limbic system is on the top of the temporal lobe for emotions, etc. Two important parts are

Cerebellum: Translates to the little brain in Latin, it is under the cerebrum. Its function is to coordinate muscle movements and to  maintain posture and balance.

We often talk about the gray matter in common parlance. Well, those are neuron cell bodies and hence gray cells in your brain. There is the white matter which are neuron axons that carry  information. The white matter appears white because of the high fat content of the myelin protein that covers it. Not that you really needed to know about it. If you have binge watched medical shows like House MD or Grey’s Anatomy like me, you would have come across most of these terms. Let’s assume you did not.

Brainstem – below the corpus callosum (remember the bundle of nerve fibres)  and does basic functions like regulates sleep, eating, breathing, etc. We will hear about brainstem again. This has the Midbrain, Pons and the Medulla

Enough of the anatomy. The important part is how messages are transmitted and how genes play a role in brain health.

The most important part for us to understand are neurotransmitters which enable the complex messaging in our brain.

These are basically chemicals that are the messengers for the brain. They can be either excitatory, inhibitory, or modulatory. It means that when a neuron wants to send a message, these can either excite, inhibit, or modulate (send to many other neurotransmitters or communicate with other) a response. So while more than 200 types of neurotransmitters have been identified, let us look at 8 that are of importance. We have all heard about a few of these for sure; for example, dopamine and serotonin are sometimes known as happiness hormones.

There are different types of neurotransmitters. Monoamine (as the name suggests, it is a single amine) neurotransmitters include serotonin, dopamine, and  norepinephrine. The second set contains amino acids.  The third set is peptides.

The most important neurotransmitters include Serotonin, Dopamine, Norepinephrine, Glutamate, GABA, Glycine, Acetylcholine, and Opioid receptors. Serotonin is responsible for appetite, sexual desire, and sleep. Depression and sleep have shown a link to Serotonin.  Dopamine as you have probably heard is responsible for  reward, addiction, movement and has found linkages to both Parkinson’s (too less) and schizophrenia (too much). For example, the COMT (Catechol-o-methyl-transferase) gene variant affects circulating levels of dopamine in the prefrontal cortex. Having COMT gene variants can modify dopamine levels and affect stress response (fight vs flight), resilience, and anxiety levels. Some studies have found a link between COMT-induced dopamine changes and susceptibility to depression. Another important neurotransmitter is Norepinephrine. This is from the same family as adrenaline, its cousin aka Epinephrine. This is what we call “epi” in the medical shows in the ER. It has found linkages to ADHD, cardiac failure and anxiety. Glutamate is known to excite everything and ALS, famous for the ice bucket challenge, is linked to a genetic variant. GABA on the other hand inhibits everything and lack of it is found to induce anxiety, drug abuse, etc. Yoga is said to increase GABA levels and thus useful for anxiety, etc.  Acetylcholine has found its usefulness in substance and nicotine addiction. Opioid Receptors as the name suggest have a linkage to substance abuse, alcoholism, etc., and it affects alcohol withdrawal symptoms, naltrexone therapy wont work.

Also Read: Mental Health? What Does Our DNA Have To Do With It?

So where do genes play a role?

Genes play a role in pretty much everything related to the brain, but without the epigenetic marks or environment, it may not express. In understanding brain health, therefore, genes must be used as a guide, not as destiny. Let’s start with our favorite Stress and anxiety that comes with it. So when we are stressed, a whole bunch of neurotransmitters called Catecholamines are released that include dopamine, epinephrine, and norepinephrine. There is a gene in our body called COMT that is responsible for making an enzyme called Catechol-O-Methyltransferase which it cannot make in reasonable quantities if there is a genetic variation. However, the knowledge of this gene can help in making wiser choices in terms of diet and exercise and environment to destress.

Similarly one of the genetic markers for Anxiety is a single nucleotide polymorphism (SNP), Val66Met variant in the BDNF (Brain-Derived Neurotrophic Factor) gene. The BDNF gene is known as the master brain molecule as it regulates the survival and growth of neurons, hippocampal-amygdalar circuitry, and signalling and influences synaptic efficiency and plasticity. What does this variation mean? Essentially there is an amino acid change from Valine to Methionine in codon 66 that affects all these activities. The good news is that regular exercise can affect the gene expression.

Depression is now a relatively better studied subject, although still subject to social stigma. There are many genes involved in depression. One of them is the Ser4814Ala variant in the PCLO (Piccolo) gene, where we again find an amino acid change from serine to alanine. The piccolo protein influences calcium dependent neurotransmitter (monoamine) release in the brain. The Ser4814Ala variant in this gene affects hypothalamic–pituitary–adrenal (HPA) activity, grey matter volume in depression patients. In another study, the PCLO variant was linked with depression-associated traits such as reduced novelty seeking and greater fearfulness.

While there are social and cultural influences on alcohol consumption, there is also an influence of genes when it comes to Alcohol Addiction. One of the SNPs associated with this is the Asn40Asp variant in the OPRM1 (Mu-Opioid receptor) gene. As before the risk comes from an amino acid change from Asparagine to Aspartate. The mu-opioid receptor protein is involved in pain and reward mechanisms, and positive reinforcement. The Asn40Asp variant in this gene affects the release of dopamine in the striatum (an important part of the reward circuitry). Studies showed that carriers of the variant are predisposed to greater dopamine release and higher euphoria in response to alcohol consumption, and are more likely to develop addiction.

Some of us have Social Phobia. While social conditioning and other factors influence how one reacts to it, genes have a role to play as well. One of the genetic markers is an SNP which is again an intronic variant (A–>G) and a 43-bp deletion in the SLC6A4 (Serotonin transporter) gene. The effect is that it modifies serotonin levels. The SLC6A4 variant is present upstream of the promoter region and is closely linked with a 43-bp deletion, known as the 5-HTTLPR variant.  In vitro studies showed that the G variant allele resulted in lower levels of serotonin receptor expression. The presence of these genetic factors can predispose to social anxiety manifestations such as blushing and extreme introversion.

For war veterans and those who suffer from severe trauma, there is a possibility of developing PTSD.  As with other conditions, there are genes that are implicated. One of them is a SNP that is an Intronic variant (T–>C) in the HTR2A (Serotonin Receptor 2A) gene. This is involved in the Expression of serotonin receptor 2A. The HTR2A SNP alters transcription factor binding and reduces promoter activity, thus impairing serotonergic transmission. This increases risk for PTSD and other disorders like schizophrenia.

As we age, there is likely to be some cognitive impairment or potentially Alzeihmers disease as well. One of the most studied markers is found in the APOE (Apolipoprotein)  gene that is also in the serotonin receptor 2A . The APOE epsilon haplotype is the strongest genetic factor associated with cognitive decline. The presence of this marker increases the risk for higher levels of amyloid accumulation, greater amyloid and tau content in CSF and plaque formation.

As mentioned earlier, diet and exercise are likely to get imprinted as epigenetic tags or otherwise change the outcome for a person. For example, the BDNF gene is involved in key neurological processes such as hippocampal–amygdalar circuitry and signalling.

Mice-based studies have proved that there is a strong association between exercise levels and BDNF levels. The levels of BDNF increases with regular, moderate-intensity exercise, with a dose–response relationship.

While aerobic exercise is beneficial for enhanced BDNF production (exercise-induced neurogenesis), some studies show that extreme levels of exercise might be less beneficial.

Our brains are fascinating. Perhaps we can explain this by a sanskrit verse

This verse means that without a doubt,  O mighty-armed, the mind is restless and very difficult to restrain; but it may be controlled by constant practice and non-attachment.