Haemophilia Day: Let Us Paint It Red for a Cause! 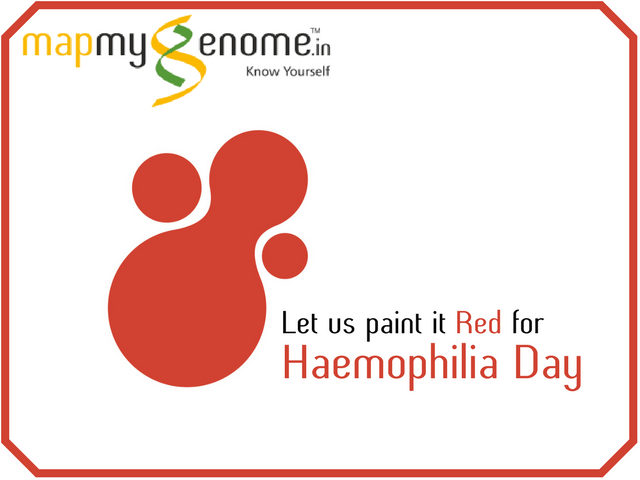 Have you noticed some people have a tendency to bruise easily especially in early childhood or have excessive bleeding from cuts that takes a long time to stop? Sounds like a very common condition, doesn’t it? We all have someone we know who is extra “wobbly” or gets through 5-6 bandaids a day. What we are unaware of is that there is a certain population of people that exhibit these symptoms and suffer from a well-known genetic bleeding disorder known as Haemophilia.

Know more about it

Haemophilia A and B are both genetic conditions and most cases are identified at a stage as early as birth. In around two-thirds of cases, there is a family history of haemophilia A. The remaining cases are caused by spontaneous mutations.

Haemophilia A and B mainly affects males. Females can be ‘carriers’ of the affected gene and may experience symptoms.

What causes this condition? Is it genetic?

Thus, males can develop haemophilia if they inherit an affected X chromosome that has a mutation in either the factor VIII or factor IX gene. Females also have the possibility of developing the disease, but cases are much rarer. In those cases, both X chromosomes have to be affected or one is affected and the other is inactive. Females with this set show bleeding symptoms similar to males with haemophilia.

Even though haemophilia does run in families, certain families have no prior history. Sometimes, there are carrier females in the family, but no affected boys. Haemophilia can result in:

The worldwide incidence of haemophilia is not well known, but estimated at more than 400,000 people.

There is currently no cure for the condition. There are very effective treatments available in the US, but require the lifelong infusion of drugs manufactured from human plasma or through recombinant biotechnology.

Nearly 90% of Americans with severe haemophilia became infected with AIDS in the 1980s when blood and plasma donations in the US were not properly screened for HIV.

Recent research and technology in donor screening and viral inactivation measures in the commercial manufacturing process have made clotting factor products very safe.

Acquired haemophilia is rarer, with an incidence of 1.34 cases per million population a year.

In cases of known family history, families with haemophilia get their baby boys tested soon after birth. About one-third of babies diagnosed with haemophilia show a new mutation that is absent in their family members. In these cases, blood tests help confirm if the blood is clotting properly. Factor assays help determine the cause of the bleeding disorder. These tests help evaluate the type of haemophilia and the severity. It is also possible to find your probability of being a carrier. Some carrier analysis tests that can help include: What are the options for cure and treatment?

Haemophilia is treated by replacing the missing blood clotting factor so that the blood can clot properly. This is done by infusing commercially prepared factor concentrates. People with haemophilia can learn how to perform these infusions themselves so that they can stop bleeding episodes and, by performing the infusions on a regular basis (called prophylaxis), can even prevent most bleeding episodes.

Haemophilia Treatment Centers (HTC) offer good quality medical care from doctors and nurses well versed with this disorder and can help prevent serious issues. An HTC not only provides care to address all issues related to the disorder, but also provides health education that helps people with the condition to stay healthy.

A word from us

Families with Haemophilia history should be genetically tested.

Although rare, this condition is among the top six bleeding disorders in India. The reported number of patients with haemophilia A is 11,586 while the estimated prevalence could be around 50,000 patients.  Our country does not have a policy on the prevention and control of such genetic disorders. Hence, it is even more important to create awareness on such dedicated days.