Hyperhomocysteinemia: Is It Putting Your Heart at Risk? 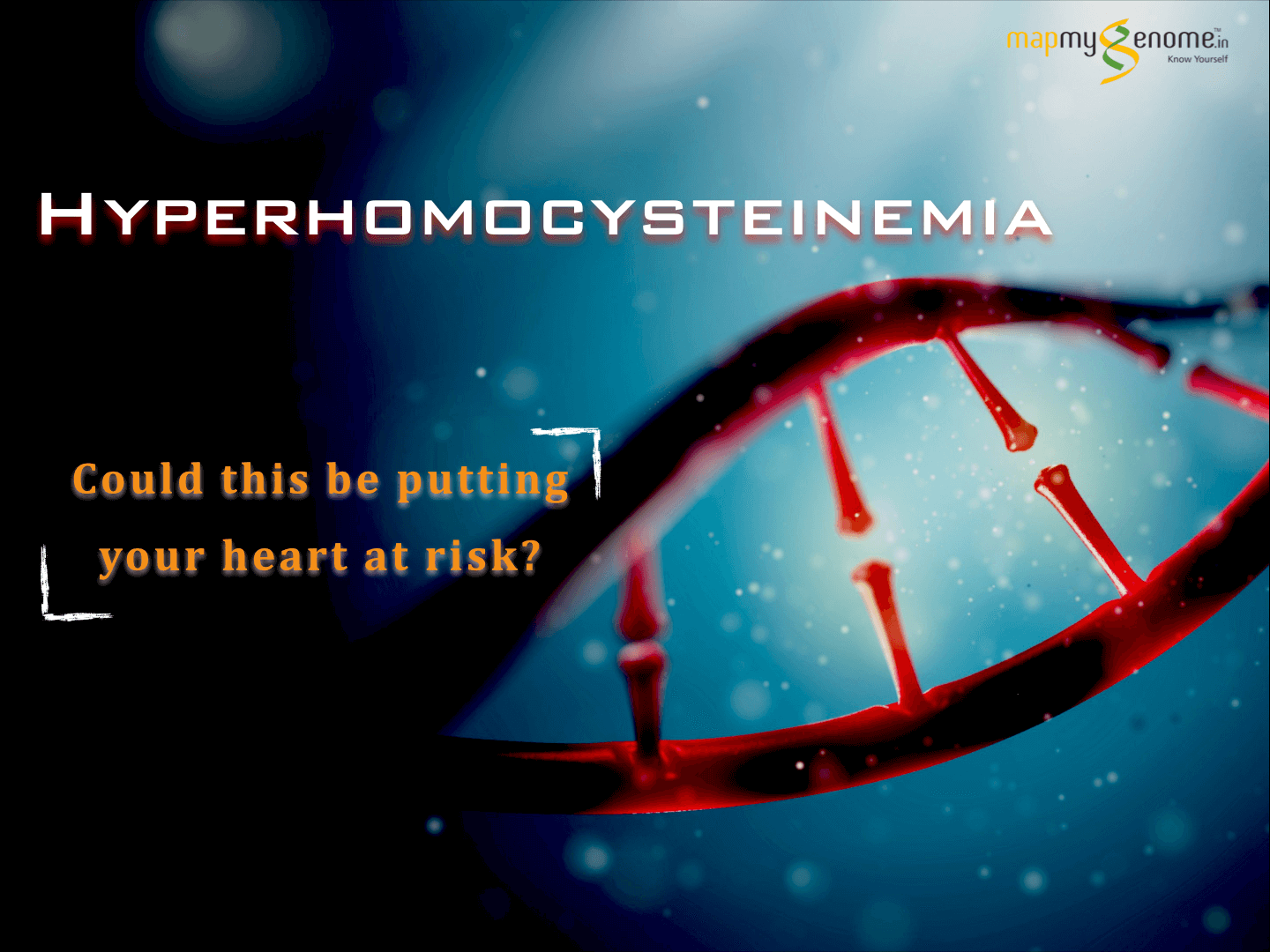 Proteins are the structural and functional units of a living organism. Their complex structures are made of units called amino acids (AA). Twenty amino acids join together in a variety of combinations to form different proteins that perform specific functions in our body.

Vitamins B6, B12 and folic acid levels are inversely related to homocysteine levels and thus, at times, due to their dietary deficiencies, the homocysteine levels may be elevated. This condition is known as Hyperhomocysteinemia and has been linked to an elevated risk of heart disease.

Normal homocysteine levels in a healthy person range between 4.6 to 11.9μmol/L, depending on the age and the gender [1]. Hyperhomocysteinemia can be caused due to genetic mutations or dietary deficiency of vitamins and folic acid. Apart from this, high homocysteine levels can also be found in patients with kidney disease, hypothyroidism, psoriasis and if they are on particular medications [2].

Are There Any Causes or Risk Factors?

An unbalanced diet, aging, smoking, high blood pressure and cholesterol and high creatinine can be associated with increased homocysteine. Also, males are more prone to develop this condition.

Since vitamins and folic acid are key determinants, the consumption of a balanced diet, rich with folate sources, like leafy vegetables, cereals, lentils and chickpeas have decreased homocysteine levels [2]. What Are the Health Risks Associated with Hyperhomocysteinemia?

Homocysteine increases the risks of cardiovascular diseases. It does so by adversely affecting the walls of the major blood vessels as well as a type of muscle cells called “smooth muscle cells.” High levels of homocysteine affect the structure and function of the arteries. This leads to oxidative damage, endothelial dysfunction, increase in synthesis and accumulation of collagen and deterioration of the elasticity of arterial walls. High levels of blood homocysteine also play a role in blood clot formation (deep vein thrombosis) [3]. Such clots, called “thrombus,” impede the normal flow of blood and can also increase the risks of a heart attack.  All of these changes promote atherosclerosis (blocking of arteries supplying blood to heart), ultimately leading to congestive heart failure and heart attack (myocardial infarction)

There is evidence to show that hyperhomocysteinemia also plays a role in neurodegenerative illnesses such as Alzheimer’s disease, depression and Parkinson’s disease [3].

Homocysteine plays a role in foetal development and high levels have been observed in women with certain pregnancy complications such as placental abruption, neural tube defects and pre-eclampsia. Evidently, controlling homocysteine levels is important for the mother and child. Fortunately, pregnant women are advised to take folic acid supplements; thus, this is an added advantage and can keep the homocysteine levels in check too. It is recommended that women who plan to get pregnant have their homocysteine levels tested and start on supplementation prior to conception. The recommended supplementation before getting pregnant is a high-quality multivitamin with 0.4 to 1.0 mg/day of folic acid and 2.6 micrograms/day of vitamin B12. Other nutrients include 2:1 ratio of calcium and magnesium (1000 mg Ca and 500 mg Mg), 1000-5000 IU vitamin D3, 10,000 IU of vitamin A, apart from fish oils (rich in EPA and DHA) and probiotics. If MTHFR gene mutations run in the family, a person is at risk of getting a mutated version of the gene. This mutation can be inherited from either of the parents. Both mutated copies of the gene, one from either parent have to be inherited for hyperhomocysteinemia to develop. Even if a person has mutated genes but normal homocysteine levels, supplementation may not be necessary.

Certain MTHFR mutations make the MTHFR enzyme defective. Such a defective enzyme produces lesser amounts of methyl folate, the active form of folic acid (vitamin B9). Methyl folate is vital to almost all major biochemical reactions in the body.

The two MTHFR mutations that cause the majority of problems are C677T and A1298C. A defective MTHFR gene reduces its ability to form an MTHFR enzyme by 20% to 70%.

Should One Get a Homocysteine Level Test?

Tests to check homocysteine levels aren’t part of any standard diagnostic testing protocols. However, infants who have a family history of the disease and young adults who have had a premature heart attack or have shown symptoms of strokes have these levels checked in their blood tests. Once hyperhomocysteinemia is detected, single or combination vitamin tablets are prescribed and the next blood test is done after about two months to check if they have stabilized [2].

How Does a Preventive Genetic Test Help?

A genetic test determines if the person has a functional or defective MTHFR gene. The type of defect can also indicate the severity of the problem in terms of impairment in the ability to produce the MTHFR enzyme. If the person is found to have a genetic variant of the gene, she can be given proper supplements to avoid hyperhomocysteinemia and its associated health complications. This helps in reducing the risks of heart problems as well as the many health complications that can be caused by elevated levels of homocysteine.

Genomepatri helps you identify your risk for this condition, along with over 100 others, bundled in one simple non-invasive test. This once in a lifetime test is followed by a free genetic counselling session to help you understand the implications of your genetic risks, and help you put an action plan in place to ensure a healthier life. You too can be a part of the ever growing Genomepatri family by clicking here

Once the diagnosis is confirmed, the person can talk to her doctor about the changes in diet and lifestyle she will need in order to overcome the deficiencies caused by a faulty gene.

Hyperhomocysteinemia is an avoidable condition and yet because of its non-existent warning signs can cause potentially serious health conditions. While nutrient deficiencies can cause this condition, many people have a genetic defect that can lead to this condition. A simple gene test can help identify the problem and supplementation can avoid potential health complications.