Is Thor Actor Chris Hemsworth Taking A Hiatus Due To His High Risk For Alzheimer’s Disease? 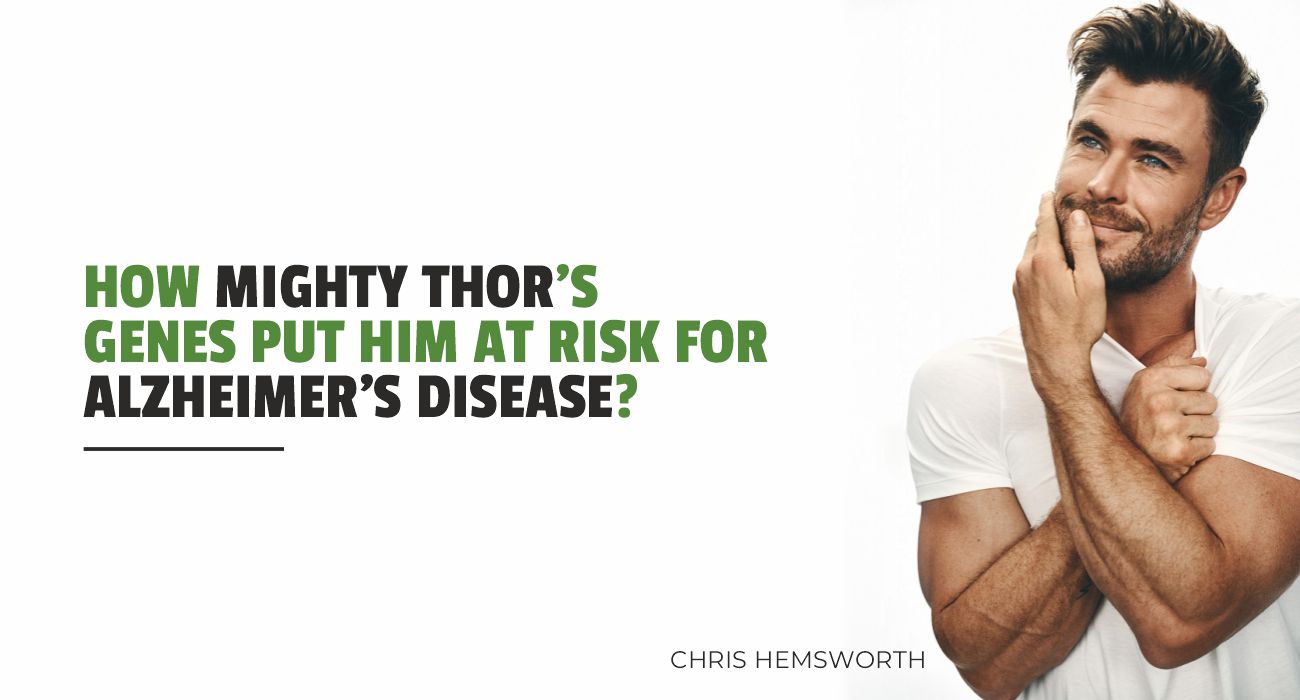 One would think Hollywood star Chris Hemsworth is in optimal physical shape and he never has to worry about his health in the future. But recently, the actor discovered in himself a ‘strong indication’ of a genetic predisposition to Alzheimer’s disease.

Chris Hemsworth’s DNA has two copies of the gene variant APOE4, one from each side of his mother and father, which is associated with the onset of Alzheimer's at an early age. One in four people carry a single copy of this gene variant, but 2-3% of the world population including Chris Hemsworth, carry both. The actor’s grandfather also has Alzheimer’s, which increased his chances of being prone to the disease by more than eight to ten times.

Alzheimer’s Disease is a neurodegenerative disease that is the most common form of dementia. It is a progressive disease beginning with mild memory loss and possibly leading to loss of the ability to carry on a conversation and respond to the environment.

Find out more about Alzheimer's here

APOE4- A marker for Alzheimer’s risk

While there are many genes that can put someone at risk for developing Alzheimer’s disease, APOE4 variant in the APOE gene is found to be the strongest risk factor for developing this disease. APOE is a gene that is responsible for making a protein called apolipoprotein E. Although people might have different variants of the gene, APOE4 variant of this gene is found to be the one that is most associated with the early onset of Alzheimer's.

But APOE4 is not the only deciding factor. That means having this gene variant doesn’t mean you will definitely develop Alzheimer’s and not having it doesn’t necessarily mean you steer clear of the disease. Your environment, what you eat, how much you sleep, and your lifestyle - all of these factors go into the mix, whether you have early onset, late-onset (after 65 years) of the disease, or not at all. This uncertainty is part of why it is important to learn about your disease risk early so that you can take preventive actions.

Why one should consider genomic testing?

Genomic testing cannot tell for certain if you develop Alzheimer’s or not, however, it is useful for estimating your risk. Finding out that he is predisposed to Alzheimer’s disease has helped Hemsworth keep prevention on top of his mind. Sleep management, nutrition, and fitness are the tools that the actor has been using consistently for this purpose. The genomic test and subsequent steps taken by the actor can help him prevent or delay the onset of Alzheimer’s Disease.

Mapmygenome’s Genomepatri, a DNA-based health and wellness solution, is one such test that gives you a comprehensive assessment of your health helping you learn about your predisposition to conditions like Alzheimer’s Disease. Our next-generation sequencing solution, Whole Exome Sequencing, is another tool to get an extensive insight into familial Alzheimer’s disease, which is passed down from your parents and grandparents,  to understand your risk for early onset of Alzheimer’s disease.

Consulting a genetic counselor after taking these genetic tests can help you in understanding your health from a genetics standpoint. Mapmygenome’s genetic counselors consider your family history and guide you through the genomic report. They help you in interpreting the results, assess the implications of results, and create a personalized plan to prevent or delay the onset of Alzheimer’s Disease.