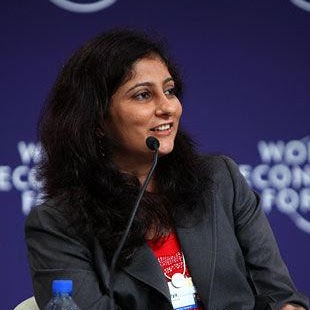 Anu Acharya, CEO of Mapmygenome, won the Women Ahead honour in Jio Economic Times Startup Awards 2015 (announced on 14 August 2015). She was also shortlisted as a top contender in “Top Innovator” category of the awards. This post shares content from The Economic Times (all India) dated 14 August 2015.

ET Startup Awards 2015: Anu Acharya has made her mark with DNA testing, wins ‘Women Ahead’ honour

ET Bureau Aug 14, 2015, 05.47AM IST
An entrepreneur who started her journey in the telecom and IT sectors, Anu Acharya, 43, is well-regarded for her contribution to genomics research, mainly through her molecular diagnostics company Mapmygenome. Acharya, an alumna of the IIT-Kharagpur, grew up with dreams of becoming a physicist. But her first job after she graduated from the University of Illinois — with postgraduate degrees in physics and management information systems — was with telecom software company Mantiss Information in the US. She later joined consulting firm SEI Information, where she helped create a networking website for entrepreneurs.

In 2000, Acharya founded Ocimum Biosolutions in the US as a genomics outsourcing platform providing research as a service to scientists. Ocimum raised equity investment of $17 million in 2007 and eventually acquired three companies, including a line of biorepository from Germany’s Gene Logic, integrating MWG Biotech’s microarray business and Isogen’s oligonucleotide business in the Netherlands.

This marked Ocimum’s transition from a bioinformatics platform to a lab-next-door. Acharya was Chief Executive at Ocimum till 2013, before turning her attention to her new venture.

Mapmygenome, which Acharya founded in 2011, is a rare enterprise engaged in developing genomics solutions for predictive diagnosis and prognosis, using DNA testing. The company raised $1.1 million in a pre-Series A funding round earlier this year from Rajan Anandan, Google’s VP and MD for South East Asia and India, and Satveer Singh Thakral, Chief Executive of Singapore Angel Network, and others.

“An endorsement by The Economic Times is super exciting, as Mapmygenome continues on its growth journey,” said Acharya, Founder and Chief Executive.

Mapmygenome reaches 3,000 customers through hospitals and by selling DIY analysis kits, besides offering counselling for lifestyle management. “At Mapmygenome, we hope to impact more than 100 million lives by 2030 and to create a unique database for the Indian population to understand the amazing genetic diversity within it,” Acharya said in an email. “These are exciting times for startups. With encouragement from big players and media houses like ET, India can become a natural breeding ground for cool technologies and disruption,” she said. Mapmygenome was recently recognised as the Emerging Company of the Year-2015 in the Devices and Diagnostics category at Bangalore Bio 2015.

The award was presented by the Karnataka government’s Department of Information Technology, Biotechnology and Science and Technology.

Congratulations @anuacharya on the ET Award. Proud to be amongst @mapmygenomein ‘s first few clients.

ET Startup Awards 2015: @Anuacharya has made her mark with DNA testing, wins ‘Women Ahead’ honour – The Eco… http://t.co/KeEAxRj6AX

Congratulations to my alum @anuacharya for the ET #WomenAhead award. Proud to have been one of the first to take the @mapmygenomein test.