New Year Resolutions for 2018: Your Genes Can Help You 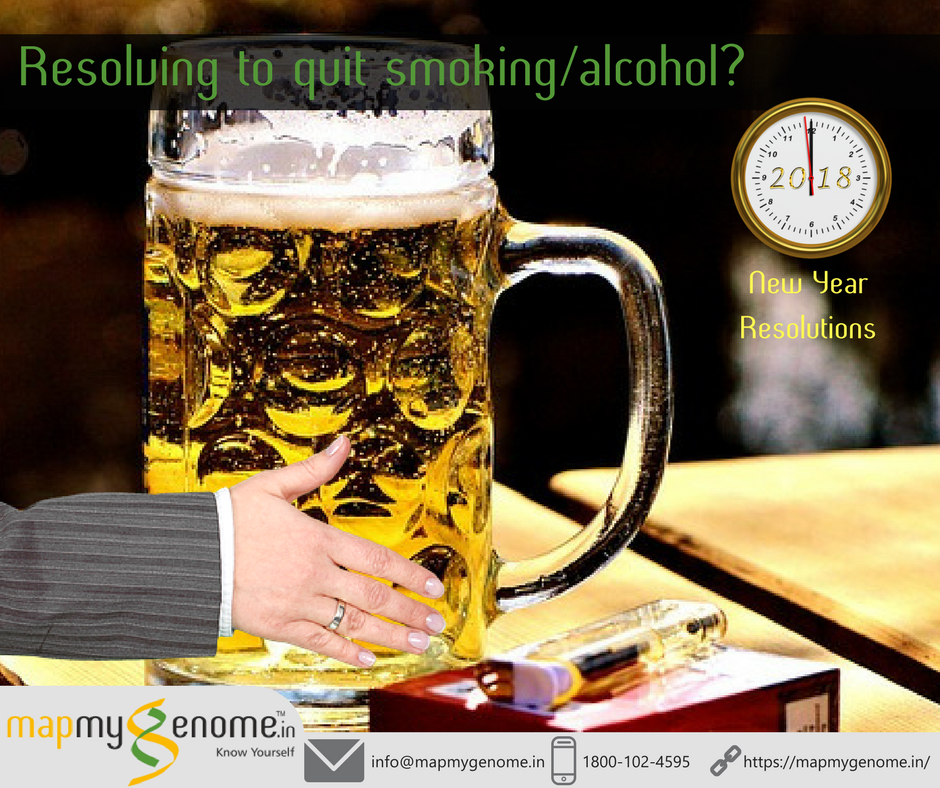 Resolving to kick your drinking or smoking habit? Look inside your genes.

It is the time to bid adieu to a year that might have been full of expectations and opportunities. And yet there remained many of them that couldn’t be completed. The New Year brings in a brand new set of days, all 365 of them, to plan and resolve to be and do better.

New Year’s resolutions form an important part of our lives during the last month of a year. We resolve to do any number of things we feel would add value to our lives. The most common and popular resolution is to start exercising, lose weight, and stay fit. For most, the motivation peters down after a few weeks into the New Year and the status quo returns. Until the end of the year. But let us talk about the next most common set of resolutions that people make – to quit drinking and smoking.

Anyone who has been addicted to nicotine in some or the other form, or to alcohol, has resolved, at least once in his or her life to do away with the habit. Many of them succeed in kicking the habit while many have failed. But in defense of the ones who aren’t able to quit drinking or smoking, part of the problem lies in their genes. Cigarette smoking is the single largest cause of preventable deaths in the world. Many studies around the world have pointed to a substantial amount of genetic influence on tobacco behavior and nicotine dependence. It was also found that while environmental factors play a major role in the initiation of the habit, genetic factors contribute strongly later and predominate during persistence.

While nicotine dependence due to certain genes is not a black and white issue, there are strong suggestions that the persistence of the habit is due to the activity of these genes. 75% of nicotine is converted into cotinine, which is partially metabolized into trans-3’-hydroxycotinine. These conversions are catalyzed by enzymes coded by the CYP2A6 gene. The normal, or wild type gene is designated as CYP2A6*1. This gene has a number of variants, many of which substantially decrease the metabolism of nicotine [1].

If an individual possesses a decreased activity allele (copy) of the gene, he or she is less likely to smoke, and if they do, are more likely to easily kick the habit. This is just one gene that has been shown to have an effect on nicotine dependence. However, there are still many genes that play a role in the complex mechanism through which nicotine gets metabolized in the body. In all, there is sufficient evidence for a genetic basis for why many people get addicted to cigarettes easily and find it extremely difficult to get off it.

Everybody knows some or the other ill effects of excess and regular alcohol consumption. Brain, liver, pancreas and the immune system are among the organs most easily affected by alcoholism. The trigger to start drinking are many-fold and are environment-dependent. Work-related stress, emotional stress, peer pressure, and trauma are some of the reasons why a person may turn to drinking. However, there are strong genetic factors at play in the persistence of alcoholism.

Genes such as ADH1B, ALDH2, and ADH4 have been found to influence alcohol consumption and are risk factors in the development of alcohol dependence. As is the case with nicotine dependence, these are only representative genes and a whole lot more affect the persistence of alcohol dependence [2].

So does this mean that people who have genes for nicotine and alcohol dependence cannot kick their smoking and drinking habits? No, it does not mean that. These people can surely get rid of their habits. Only that they require more efforts than others. Such individuals need a focused and extremely targeted program that uses this information to help them overcome their lifestyle habits. This is where your genes can again come to your rescue. Not being able to kick the habit of smoking or drinking when the individual knows the harmful effects of both can be a stressful situation. However, many people are able to handle such stresses with resilience. Studies have shown that development of resilience is mediated by adaptive changes in a number of molecular pathways and the neural network. These changes define how a person handles feelings of fear, reward, emotions, and social behavior, all of which are believed to help the person cope successfully with stress [3].

Among psychosocial characteristics associated with stress resilience is a sense of purpose in life. This attribute is vital in helping a person devise a strategy to make definitive and fruitful changes to lifestyle and stick to it, no matter what. Many genes have been identified that bestow such stress resilience on individuals. These genes influence a variety of adaptive changes within various systems in the body. Such people find it relatively easy to stick to their resolutions of smoking and/or alcohol cessation.

Researchers are analyzing how our genes are capable of influencing our personalities and how we respond to our environments and circumstances in life. In our present context, it means that if you can first peek within your genes, you can design your resolutions accordingly. This way, the chances of succeeding in completing your resolutions are much higher.

How Can Genomepatri Help You?

Genomepatri is a comprehensive genetic test that provides valuable insights into your genetic predisposition to not only several health conditions, but also to lifestyle tendencies like nicotine and alcohol dependence. It can also find out if you have an enhanced ability to resiliently fight stress. All of these insights will help you to devise a program to kick off the unhealthy habits of smoking and drinking. Ring in the New Year with confidence. Enjoy the New Year with health.