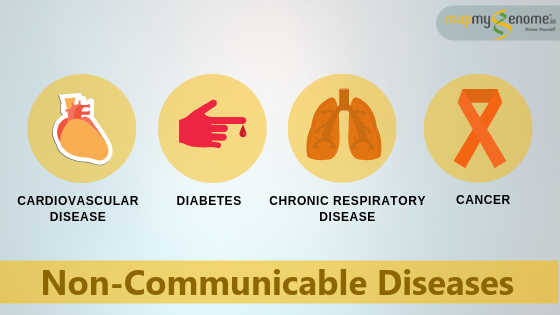 Today if you see, everything is available in surplus: from field to fork, from the laboratory to fork. As weighty as it may seem, chances of acquiring any disease is higher than ever before. Swift increase in urbanization, ageing of the population, and globalization of harmful lifestyles have started becoming risk indicators for many chronic illnesses. Chronic diseases, also called non-communicable diseases (NCDs), depend on factors like physiology, environment, behavioural pattern, and genetics. The important NCDs are stroke, heart attacks, cancers, diabetes, and chronic obstructive pulmonary disease. These are found more in people of low and middle-income groups and account for nearly three-quarters of the world-wide NCD deaths. Although it is said that NCDs affect people of all age groups, the majority of the deaths occur in people aged between 30 and 69 years. The elderly and the children are considered at risk. It is with this much thought we put-forth key facts as communicated by the World Health Organization (WHO):

In a nutshell, food and diet interventions when implemented correctly can influence the dietary behaviours of any population. Targeted health and nutrition programs, though expensive, can help in improving the health of the people and in preventing premature mortality and morbidity. Community-level demonstration programs at a competitive level can be better tools in influencing the national and international bodies to promote a beneficiary social change.

WHO reckons that NCDs kill more than 40 million a year with the majority of them middle-aged. Research studies carried out in India reported that, 25% of the families with a CVD case and nearly 50% experience cancer and its repercussions. The chances of iatrogenic (hospital-acquired) infections and hospital expenditure have increased as high as 160 % with cancer when compared with other lifestyle and communicable diseases. Studies reported that close to 2.5 billion outpatient visits in 2004 and it was linked to a 22% rise since 1995-96. Hospital stays for NCDs were close to 30 million in 2004 and it was linked to a 32% rise since 1995-96. At a larger scale, NCDs will count for 5-10% burden of GDP, and hence dampening any further development. The implications these have on health systems surely call for a major change in the thought process of the common public and their health. The focus on prevention needs a greater dependence on social and life science approach than the traditional biomedical model approach. Although care is needed in surplus, it is becoming unaffordable for the common and middle-class public. This brings a challenge to the health systems and the way the majority of the services are rendered. It is high time the health systems are restructured towards combating chronic illnesses. Prevention of NCDs should focus on educating doctors and healthcare personnel to prevent the onset of any disease rather than just diagnosing, treating, and curing them. Another major factor is the associated risk factors of the disease like tobacco usage, alcoholism, improper diets, and low physical activity, which are heavily controlled by the decisions of the economic operators in power. In many cases, people are ignorant about channels to acquire information on preventive and treatment options in healthcare. Our genetic counsellors are experts in medical genetics and psychological counselling, and will be able to discuss what your family history information means for you, however limited that information may be. In one way or another, non-communicable diseases are like slow poison as they take a lot of time to exhibit any signs of disease. But, the risk factors when controlled in advance can prevent the onset of diseases. More care is essential for finding alternatives to change the behaviours and attitudes of economic operators in power to convince authorities to adapt to a more realistic and social-science approach looking at long-run treatment options.

Despite non-communicable diseases sharing equivalent risk factors, each disease has a unique epidemiological profile and demands a separate set of treatment and preventive measures. In-depth information about NCDs, mortality and morbidity has been addressed by the global health observatory (GHO) data of the WHO in the form of a noncommunicable diseases country profile. Genetic solutions like MyFitGene will help you personalize your training and diet while understanding the strengths and weaknesses of your body.

As per the records of the WHO, 75% of the premature deaths have happened in countries belonging to the low and middle-income groups, with a majority of them preventable. Other than the risk factors, the rate of cancer depends on factors like exposure to chemicals, air pollution, and radiation. The internal agency for research on cancer at WHO lists liver cancer as the second most frequent cause of death. WHO provides vaccines for factors like human papillomavirus (HPV) and hepatitis B virus. All said and done, it is to be understood that technological advancements have led to high prices in medicines and treatment procedures even for the rich countries and it is the responsibility of the respective national governments to impose regulations on pricing and generate mandatory licenses.

As per the records of the WHO, annually, 17.5 million people lose their lives from CVDs, with heart attacks and strokes constituting the majority. Reports claim that most of the heart attacks can be prevented by modifying lifestyle and through timely medications. The World Health Organization’s The New Global Hearts Initiative has a technical element SHAKE targeted at improving the overall health of the population by decreasing the total salt intake.

A 2016 global report from the WHO on diabetes revealed a huge rise in the number of adults with diabetes. A majority of these are totally unaware of the disease condition and received no treatment. Among the ones diagnosed, the majority is affected with type II and over 42% of the global deaths occur prematurely. On a demographic note, the Asia-Pacific region is considered as the cynosure of diabetes. People living in this region are more likely to acquire the disease early and to lose their lives. In many populous cities of the region, issues like poverty, availability of proper food, and modern-day lifestyle play a huge role in the endemics and epidemics of the disease.

How Can Mapmygenome Help You:

With screening tests like Genomepatri, you can give yourself the advantage of technology and knowledge, find the best-suited route for yourself, and plan your path to lead a life of physical and mental health and well-being. Our proprietary test MyNutriGene gives you an insight into the weaknesses of your immunity, genetic predisposition to specific health conditions, and health plans to pre-empt most of these risks. Our test will also tell you about your metabolism, fat/carbohydrate response, food intolerance, and eating behaviours. Knowing what foods work for you will go a long way towards building better health. It’s time to Eat Wise, DNA Wise! To get this test done, write to info@mapmygenome.in or call us at 1800 102 4595.