Over 50 Shades of Grey: Understanding Depression 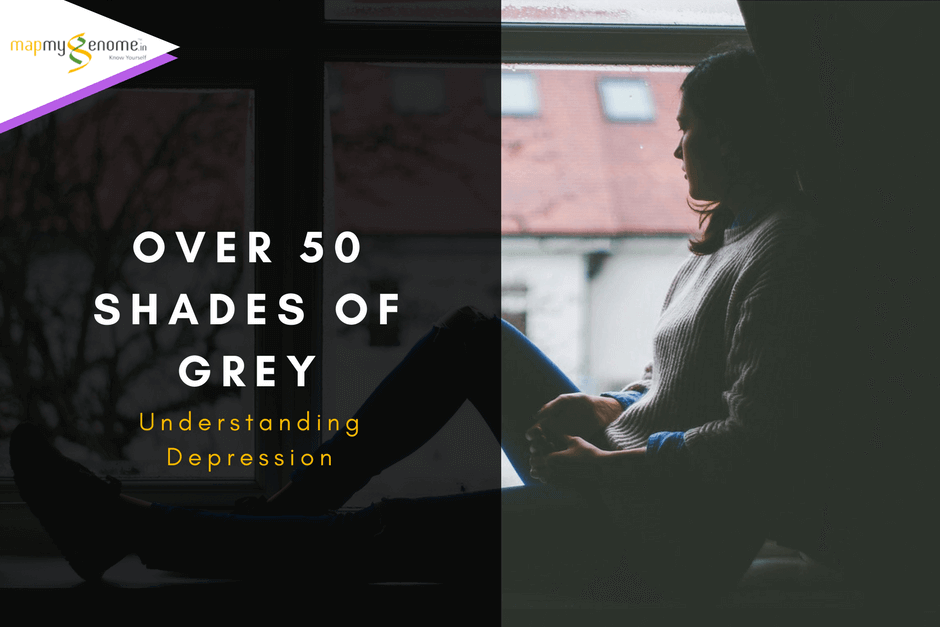 Most of us lead stressful lives that require us to keep up with fast-paced schedules at work and home. We are finding it exceedingly difficult to spend leisure time with family and friends. These and many other factors that also include societal pressures are pushing many of us towards depression. The term has become so commonplace that we may not hesitate in saying “I am depressed” – even when we do not understand the broader implications of what this serious condition is and what it can do to a life.

Depression is a serious public health problem. Consider these statistics –

These are alarming and worrisome statistics. They point to the skewed work-life balance of a vast majority and how it is pushing us towards this psychological disorder.

Witnessing a loved one go through depression is difficult and can often lead to the obvious and scary question – “Am I next?” Unfortunately, the answer leans towards yes. Can depression run in families? Genetic studies have shown a strong familial component for depression and related psychiatric conditions. An individual may be up to 2-3 fold more susceptible if he or she has a first-degree relative clinically diagnosed with depression [1].

Symptoms You Should Not Ignore

The very common household terms depression and anxiety are known in medical parlance as Clinical Depression, Major Depression or Major Depressive Disorder. It ranges from temporary episodes of sadness to more prolonged and severe episodes that last over several weeks. This is very different from the one triggered due to untoward circumstances or medical conditions.

Depression interferes with day-to-day activities, depending on the severity of the condition. Whatever may be the case, it is important for you to tell your doctor the exact symptoms and the time of their appearance so that correct diagnosis can be made and the course of treatment be decided. These symptoms range from physical to behavioural changes and persist for at least two weeks. They broadly include the following: All these symptoms are interrelated and it is possible that you may exhibit more than one of these at any given time.

Is It In My Genes?

The exact cause of depression cannot be ascertained, but an amalgamation of social and psychological factors is necessary to cause depression. Additionally, genetic predisposition has also been linked to depressive episodes.

The Genome-wide Association Studies (GWAS), shed light on the genetic links to depression. Studies indicate that depression is governed by different genes; as many as seventeen gene variants (Single Nucleotide Polymorphisms- SNPs) are responsible for an elevated risk of depression in people of European ancestry. They have significantly enhanced our understanding of the deeper connection of genetic variations and the increased risks of depression. As many as 13 variants were found to be responsible for neurodevelopment and have been associated with different psychiatric characters [2].

Even though the results cannot be generalized, they do provide a wider understanding of the biology of depression, therefore allowing experts to take a step closer towards definitive diagnosis and subsequent treatment.

Another interesting fact worth mentioning is about our ‘feel good’ chemical, serotonin. Serotonin levels affect mood and social behaviour, appetite and digestion, sleep, memory and sexual desire and function. The gene responsible for the production of this chemical is named SLC6A4. A variation in this gene can heighten the risk of developing depression after encountering challenging episodes.

Scientists have also uncovered five gene variants that may play a role in depression. These genes are associated with survival, growth and the network of our brain cells. Certain variants have been linked with increased suicidal tendencies. These genes, along with social or psychological components, upset the brain chemistry leading to depression.

How Is Depression Diagnosed?

There are tests like the Webneuro to diagnose depression. Our Webneuro tool helps consumers and physicians take this test in the privacy of their homes. Public health organizations have designed certain questionnaires, intensity scales and other similar tools to help doctors with the diagnosis. These tools have further been modified by independent health authorities of different countries to address racial, cultural and social differences between various populations. Apart from these, doctors also rely on the information provided by the patient’s family members. If you realize that you are heading down the path of depression, there are online screening tools that can help you to evaluate your mental well-being.  Collectively, these provide a useful way to diagnose depression. Can Depression Be Cured?

Depression is a complex condition and the timeline for cure differs from person to person. However, doctors prescribe antidepressants or psychological counselling or, at times, a combination of both. Apart from this, some people may be asked to undergo cognitive behavioural therapy, wherein the therapist and patient identify negative thought patterns and subsequent behavioural actions in stressful circumstances. Interpersonal therapy is also recommended in some cases and involves working around one’s personal relationships. All these therapies are directed towards building one’s self-esteem and confidence and instigating a sense of satisfaction and joy.

In 2015, experts were able to identify new chemical messengers in the body that have been linked to depression. They believe that identification of these has paved the way for a better understanding of the pathway or ‘route’ taken by the messengers in our body that lead to the illness. Thus, treatment targeted specifically towards these messengers seems to be a promising course for research.

Understanding one’s potential risk to develop depression during his/her lifetime can be done through a holistic assessment of family history, clinical indications, presence/absence of genetic risk factors, etc. Psychiatric conditions like bipolar disorder, schizophrenia, addiction, and depression have been extensively studied – and some scientists agree that a few mechanisms (and thereby their genes) are shared between these conditions. Hence, there may be common risk variants for all these conditions. Genomepatri provides an overall assessment of such factors as a screening tool, which can be placed in preventive wellness strategies.

What Can You Do? Attitude Matters

Even though science says that having a certain variant of gene is responsible for depression, it cannot be said with certainty that you WILL experience the condition. Your genetic information only serves as an indication of how likely you are to get depression.

Social stigma surrounding depression has lessened over the past years but still, prevents us from talking about the condition. We may talk freely about swine flu and chikungunya, but talking about mental disorders is still considered taboo in our country.

People with depression are often reserved, ashamed and even feel guilty of their thoughts and actions. As a loved one, you can help them by persuading them to seek treatment, making sure they follow the treatment,  creating a positive environment, talking to them about their troubles and most importantly, never giving up hope and encouraging them to do so too.

Depression can escalate in severity to affect daily life, even in normal individuals. There is a section of society that still does not comprehend this, and spreading awareness is a must. A kind gesture, a soft touch, and a soothing voice can go a long way!