Parkinson’s disease is a neurodegenerative disorder that affects the brain function resulting in symptoms associated with motor movements, which gradually progress and worsen with time.
Individuals with Parkinson’s disease present with:

Early symptoms are subtle and can be mistaken to be normal aging progress. The symptoms and rate of progression differ among individuals. Friends and family may be the first to notice changes such as speaking softly, mild tremors, difficulty getting up from a chair, or lack of facial expression. Typically, people experience Parkinsonian gait in which a person leans forward and walks with small quick steps with reduced arm swinging. Often symptoms begin on one side of the body or one limb. In addition, other symptoms include insomnia, depression, anxiety, fatigue, and dysautonomia. It has been identified that about 25% of people affected with Parkinson’s disease may also experience visual hallucinations and delusions.

The onset of symptoms is usually around the age of 60 years. However, some people may be diagnosed at or before age 50. People are suspected to have Parkinson’s disease when they have clinical findings of tremor, rigidity, and slow movements. However, many other neurodegenerative diseases may present with similar symptoms that may lead to misdiagnosis of Parkinson’s disease. Medical examinations such as PET scans and response to certain medications can help in accurate diagnosis.

Parkinson’s disease is caused due to impairment of an area of the brain that controls movement. The predominant area affected is substantia nigra, which has dopamine-producing neurons. Reduction of dopamine due to loss of neurons causes movement related concerns. In addition, there may be damage to the nerve endings that produce a chemical messenger called norepinephrine. This controls involuntary functions such as heart rate and blood pressure. Loss of norepinephrine might explain symptoms such as fatigue, irregular blood pressure, and decreased movement.

Medications provided for Parkinson’s can work on many levels:

One of the most common therapies includes a drug called L-dopa that improves dopamine levels in the brain. This is often provided with other medications to control for side effects of L-dopa. Other therapies include Deep Brain Stimulation, which reduce movement related symptoms such as tremors, slow movements, and rigidity. 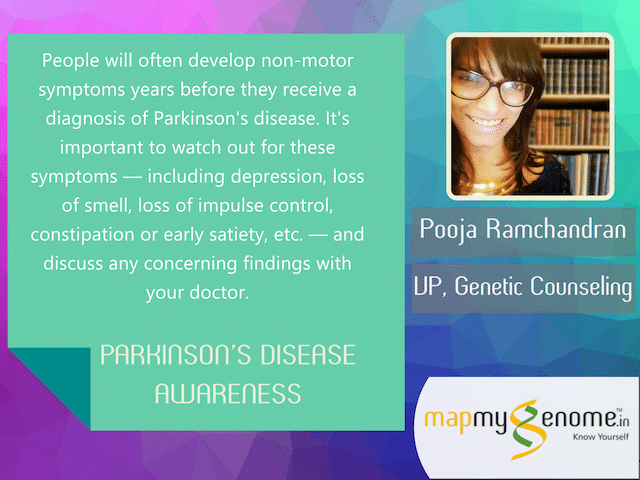 Genetic counselors are specialized health care professionals with expertise in medical genetics and psychological counseling. They help family members by facilitating informed decision making regarding their genetic health. By assessing medical and family history they help in identifying underlying genetic causes of diseases, guide in management of symptoms and provide information to at-risk relatives.

Individuals diagnosed with Parkinson’s disease may need long-term care as the disease progresses. Caregivers often experience difficulty understanding the condition and anticipate progression of symptoms. Support groups can be helpful for individuals and caregivers by providing them medical resources, connecting them to other families and advocating for the condition to raise awareness in the community.
Resources for Parkinson’s disease in India
http://www.parkinsonssocietyindia.com/support-for-you/locate-a-support-center/ 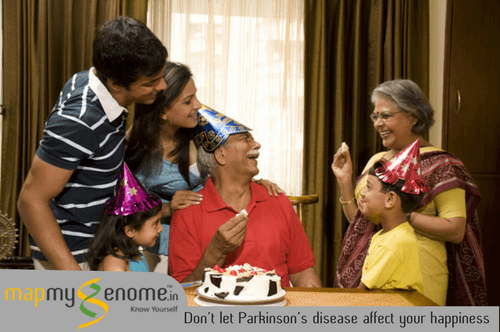 If you are an adult with a diagnosis of Parkinson’s disease or have a family history of Parkinson’s disease, speaking with a genetic counselor can help you to better understand the diagnosis and discuss emotional and medical implications for yourself and your family members. If you would like to set up a genetic counseling appointment CALL US on 1800 102 4595 (toll-free) or 040-66986700 or WRITE TO US at info@mapmygenome.in