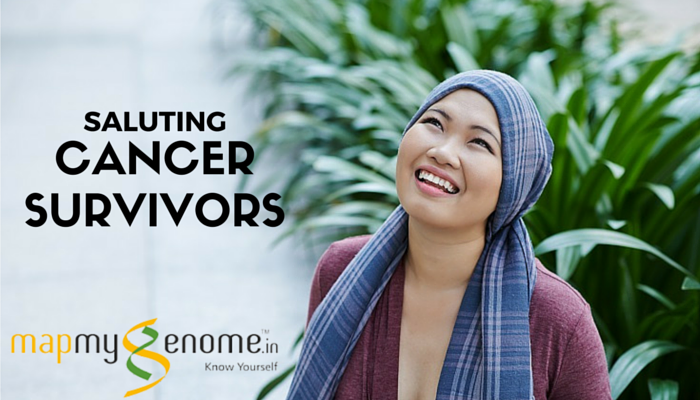 The word CANCER can make the bravest of the hearts quake with fear. Yet, there are people who have battled against this “enemy within” with courage and dignity to be called survivors. On Cancer Survivors’ Day, Mapmygenome salutes their warrior spirit, which is an inspiration to all. We also cheer all those people who are battling cancer. In this post, some of our team members share true incidents that are bound to inspire.

When I met him at his genetic counseling appointment, he was a man who had just conquered cancer but also knew there were chances of a relapse. His first question to me was: “Yes, I have survived. How do I build a cancer free life?” The first thing I did was congratulate him on his strength and perseverance, before proceeding to discuss his genetic risks and identifying screening tests to be done at regular intervals. Finally, we chalked out a plan of action that would help him lose weight, switch to a healthy lifestyle, and build immunity. He started running and his short-term goal was to run in the marathon – a simple enough goal for most people, but not that easy for a cancer survivor who had had a sedentary lifestyle hours while adult life. He stayed in touch through emails and occasional calls. Over the months, I cheered him on for every milestone – a kilo lost, improved speed, or a new healthy habit. And when he participated in the 10K run, it was a proud moment for him and, as his genetic counselor, I was very proud of him too.
–our VP-Genetic Counseling Pooja Ramchandran shares the story of one of the early takers of Genomepatri (name withheld to ensure client privacy).

I’m a Punjabi – a born warrior. From a young age, we are taught to win. It is this instinct that probably helped my mother beat ovarian cancer, along with the treatment and care. She started going for regular health checks after 40. One such check was delayed by a few months and when she was diagnosed with a tumor in the ovary, she was scared, but knew she had no choice but to fight it. I still remember her insisting for a room with a view when she had to spend a couple of weeks in the hospital for the surgery. The doctors had to remove her uterus and ovaries in an eight-hour surgery; but the minute she was shifted to her room with a view, she insisted that I sit in her room and start preparing for my Class 10 board exams. When she started losing her hair during chemotherapy sessions, she had the rest of her hair shaved off and carried off her bold and bald look in style. She battled the side effects of surgically induced menopause – symptoms that could have pushed a lesser mortal into a downward spiral of depression. And when she emerged victorious, she decided to help her fellow-women battle cancer. She works with her team of doctors to counsel people diagnosed with cancer and their kin.
–Udbhav Relan, our Product Manager and the guy who doesn’t know fear, talks about his mother’s battle with ovarian cancer

The boy who lived

It was in the year 2010 that our sub-staff’s son was diagnosed with brain tumor. He survived through the darkest times thanks to his mother’s sacrifices – her jewelry, savings, hours of caring while managing a full time job, and her dignity (it’s not easy to ask people for money to fund chemo sessions). For over a year, it was a constant cycle of visits to doctors at a charity cancer hospital where people who couldn’t afford premium treatment stood in queue. Now, it is over five years since the nightmare, but every minor ailment in her son fills her heart with dread. She takes him for regular checkups and makes sure he stays healthy. The years have not been easy for her – her husband has survived a heart attack and she is battling Type 2 Diabetes. But her son continues to live and do well.
–Pushpalatha, the boy’s mother, has been part of our team for over a decade

Fight till the end

When she was first diagnosed with metastatic squamous cell carcinoma which had spread from her lungs to the brain, the doctor gave her six months. I was broken – this can’t be happening to my mother, the person who loved me the most in the world. I couldn’t think beyond my sorrow – time became my enemy, waiting to snatch her from us. But my father and brother were not willing to give up. She was left paralyzed, but they ensured she got the best of the care – medical and at home. My brother ensured that she would go to one of the best oncologists in the country and receive physiotherapy every day. My father focused on holistic treatments – juice therapy, homeopathy, and other holistic medications. My aunts (her sisters) put their lives on hold to make her days to be with her and ensure her comforts. But I was an occasional visitor, who would spend time with her during my daughter’s school breaks – summer, Dusshera, and Christmas. Every visit left me more disheartened. However, she continued to be cheerful through her brain surgery and chemo sessions. When the end came two years later, I knew she wouldn’t suffer anymore. Years later, after a cancer scare, I told my brother that I wouldn’t want to go through chemo and other treatments like my mom. My brother replied – she lived that long because she was willing to fight. She was a true warrior.
–Geethanjali on her mother’s battle with metastatic squamous cell carcinoma

“You have a month to quit tobacco – or I’m not going to do a thing about that cancer!” To my dad, who started chewing tobacco at 16, this was a decisive moment – go cold turkey or succumb to oral cancer. In 2014, his “recurring” ulcer in the mouth was diagnosed as cancer and that too stage 4 because of its abraded topography. I remembered his struggle to quit smoking – the withdrawal symptoms, relapses, and mood swings. But the minute he came out of the doctor’s cabin, he threw away his stash of chewable tobacco and started preparing for the battle. It was a 15-hour surgery, where half of his lower jaw had to be removed and replaced with bone from the leg and muscle from the thigh. Biopsy revealed that the cancer was still in its early stages and he wouldn’t need chemotherapy. For months he couldn’t walk or talk. He still has a scar and can’t chew many food items. Nevertheless, he is learning to live a healthy life through regular health checks, physical activity and balanced diet.
–Vaibhav Gupta, our Corporate Sales Manager, talks about his father’s battle with oral cancer

Do you know a cancer survivor?