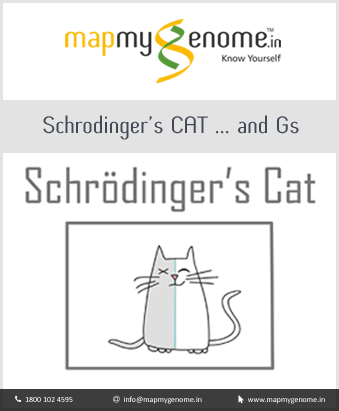 We all know about Schrodinger’s cat, don’t we?

We’ve read about it, some of us were quizzed on it in school/university, and some of us first heard about it on The Big Bang Theory (thanks Sheldon!). For the uninitiated, “Schrodinger’s cat” is a thought experiment, a paradox, conceptualized and devised by Erwin Schrodinger, a well-known Austrian quantum physicist, to explain the “flawed” interpretation of quantum superposition. In essence it poses the question – imagine a cat enclosed in a box with a radioactive source and a poison ready to be released when the source (rather unpredictably) emits radiation. At any point of time, without opening the box (which is opaque in nature Mr. Smarty pants!), can you say with the utmost certainty that the cat is alive or dead?

No you can’t! Until the box is opened, and the cat observed, the cat is assumed to be alive and dead with equal probability.

Hold on…this has nothing to do with genetics!! …… Or does it?

I present another paradox, a thought experiment – called Rohan’s T2D

Imagine an average, unassuming, young guy Rohan, who has enclosed in the nuclei of his cells his DNA, and in his hand a scrumptious, dangerously decadent Belgian chocolate shake, ready to gift him with a lifelong association with Type 2 Diabetes (T2D), if his DNA contains mutations predisposing him to the same. Now, at any point of time, can you say with utmost certainty that Rohan is at a low or high risk for Diabetes?

Replace T2D with any other condition in the world – Cancers, neurological conditions, cardiac concerns, muscular and skeletal disorders, other lifestyle diseases; and replace the yummy choco-shake with an appropriate poison, and this thought experiment still holds true. (Go ahead try it…I’ll wait) SP: “Dude! We don’t need to open the box to be sure that the cat is alive! If it’s alive and kicking, the box is bound to show some signs of movement – maybe a sound, slight motion, something! Ta-da!!”

You observe the box for signs of life and take corrective measures.

Let’s observe the box. If the cat is still alive and breathing, as Mr. Pants rightly suggested, there may be some signs of life. This is assuming that the box is NOT made of military grade metal NOR placed in vacuum (vacuum doesn’t let sound waves travel in it, so even if the cat was to be meowing for help, you would never know). So you can see the box twitch, maybe hear some purring, some meowing. Maybe the box is shaking like a palm tree in a hurricane! Great. You’ve ascertained with certainty that the cat is alive. But riddle me this – Has the cat consumed the poison already? Has the radioactive trigger led to the release of poison? The poison may not be cyanide, maybe it’s a slow acting poison. Can you tell me with certainty that the cat, though alive, is Poison-free?

No you can’t. Unless you open the box, use a Geiger counter to calculate radioactivity, or observe the presence/absence of the poison in the box, you really can’t.

Taking things in a similar context, Mr. Pants’ approach to determining whether Rohan is at a high or low risk for Diabetes involves understanding his family history, or observing the box (his body) for the presence or absence of the initial sign of Diabetes. So Rohan does not have any significant family history of T2D, nor does his body show any signs of diabetes. Awesome! You’ve determined by observation that Rohan is (possibly) safe from Diabetes.

But is he? Riddle me this – Can you say with certainty that Rohan doesn’t have the disease? Sure the T2D hasn’t gone out all guns blazing yet, and hence the lack of symptoms, but have his genes triggered the onset of a silent, dangerous and chronic disease? Or does his DNA contain mutations which will lead to him having the disease in a very short time frame from here on out? In this case, it’s very easy to ascertain by observation that Rohan has consumed (or not yet) the oh-so-yummy shake. What you can’t observe is whether or not that shake triggered a series of events (dictated by his genetics) that eventually lead him on the lifelong path of diabetes.

No you can’t. Unless you map out his genome, and assess the presence/absence of specific mutations in his DNA, you really really can’t.

Ok Pants, put your hand down.

I know what you’re going to say next – “It’s all about saving the cat isn’t it? So if it’s still alive, I will take it out of the box and do whatever is necessary to save it. I’ll check for the presence or absence of poison in its system, and if it’s there, I will advocate medical intervention to save it! Same goes for dear Rohan.”

Well… They don’t call you Smarty Pants for no reason! That’s a good albeit a reactive and a painstaking (not to forget costly) approach.

Let’s keep the cat in the box for now and focus on Rohan. Let’s say you put him through a barrage of blood tests annually (or 2-3 times a year) to check if everything is a-ok. Apart from the costs piling up, there’s one serious drawback here. A blood test looks for clinical endpoints of a certain disease –  analytes that enter the blood stream after the disease has manifested. Then starts the treatment. Depending on a number of factors starting with the hospital you choose, to the extent of disease, to the drug/treatment chosen, the cost of treatment can reach alarming numbers. Add to that the fact that once you have a disease (be it diabetes, heart disease or cancer) you are looking at treatment options rather than prevention. The cost of prevention is much lesser than the financial (and emotional) cost of a lifetime of medications, an emergency bypass surgery, or the uncertainty of the outcome of chemotherapy.

What if I told you that there’s a better way, a better approach – one that is prevention-focused, saves you money and time, and allows you to take action TODAY to counteract tomorrow’s disasters, and replaces your title of SMARTY pants and not GEN(e)IUS trousers! Pull that bottom jaw back up and hear me out.

The advent of technology and research in the field of genomics has made it not just possible and affordable for the masses to get their genome studied. What’s the value in doing that? Well, as you well know, your genes (fragments of your DNA) dictate everything in your life – right from how tall you’d be to whether you are susceptible to acquiring a certain disease, to how a certain disease manifests in you, all the way up to how a certain drug or treatment regimen would work for you. As if that wasn’t enough, it also tells you what conditions you may pass on to your children, what kind of diet you’re best suited for, and what category of sporting events would best suit your genetic ability, among a million other things!

If you were to look at Rohan’s genes, you would be able to say, with certainty, if he were at a high or low risk of developing T2D (even if his blood reports say he’s smashing right now). With the help of a genetic counselor, Rohan could choose not become a victim to that sweet poison, and choose to be proactive instead. He would be able to take the right steps today (change in diet and lifestyle, incorporation of specific blood tests in your annual health check up – to stay one step ahead) to possibly altogether avoid T2D in the future and take charge of his health the way he takes charge of his career.

Your genes, your DNA is a wonderful thing – it holds great potential to give you an explanation about the events of your past, help you understand the present slightly better, and throw light on what lies in store for your future.

Find out what your DNA has in store for you, come see what lies ahead and take one step closer to knowing who you really are! Udbhav Relan is a member of the Mapmygenome gene pool, having joined us after completing his MSc in Biotechnology and Enterprise from University of Manchester (UK). He loves hitting the gym regularly and going on biking trips. When he isn’t working, he can be found either in a nature reserve – clicking away to his heart’s content, or strumming his guitar trying to ape his childhood heroes – Metallica, but mostly he would be found in a bar, cheering on Manchester United while chugging down gallons of…Green tea (Hey! He’s a fitness freak!)