Should you take that genetic test? 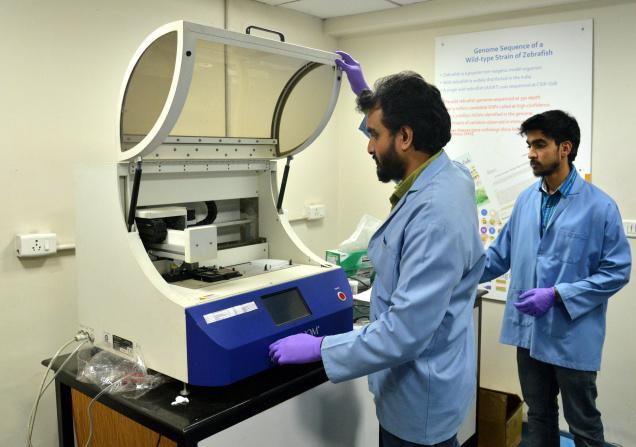 GENE WATCH: “Genomics testing is still an evolving business in India.” Picture shows researchers preparing to use a genome sequencing machine at the CSIR-Institute of Genomics and Integrative Biology, New Delhi.

Gene mapping could provide clues to your vulnerability to certain diseases, but consult a clinician first.

Ever since science has shown them to be the chemical code that builds bodies, genes are usually only associated with irrevocable maladies. Huntington’s disease, which is a fatal disorder of the nervous system, Fragile X syndrome, or sickle-cell anaemia are severe afflictions that result from a single rogue gene being passed on down the generations.

To Anu Acharya, chief executive officer, Mapmygenome, genes are more than fatal passports. Her Hyderabad-based company offers users, for Rs.25,000, a chance to get their genes mapped. Other than propensity to genetic diseases, Ms. Acharya’s Genomepatri — as the test is called — tells you about your vulnerability to liver, kidney diseases and “nicotine” and “alcoholism” and even “caffeine consumption” and “athletic ability.” Interpreted correctly, reading your genome is like a horoscope that can reveal hidden insights and help you live healthier and happier, according to her.

“If you have two-three members with diabetes in your family, there’s nearly an 80 per cent chance of you contracting the condition too… you don’t need a genetic test for that,” says Vinod Scaria, a clinician-turned-geneticist who works on finding the genetic roots of rare diseases. Mr. Scaria and his colleague Sridhar Sivasubbu, at the Delhi-based Institute of Genomics and Integrative Biology, have over the years organised a network of doctors across the country — called GUaRDIAN — to help map individuals and families afflicted with rare diseases that may have a strong genetic component. The idea is that over time new genes, or variations of known genes are discovered that will be useful to design better drugs or sometimes use known drugs in new ways to find cures for hitherto untreatable diseases. A doctor from Pune, for instance, got in touch with the GUaRDIAN team to report a child with skin like fish scales. “A man and his wife, both healthy, had two children with the same problem. We found it was a result of a genetic condition, so rare that it afflicts 1 in 200,000 people,” says Mr. Sivasubbu. Two things happened: one, the couple could determine that their third child didn’t suffer from the same condition; and second, they were suggested a treatment — usually used in cancer — to treat their older children.

Binay Panda, who leads Ganit Labs, a research organisation that searches for patterns in genes across large data sets, says that most genome analysis in India rely heavily on data that is specific to Europeans. “For cancer, or for determining drugs that may be best suited for once person and not for others genomics is essential but I believe there ought to be regulation and that genetic tests only be recommended by clinicians,” he says. “Selling genetic tests to people who are well isn’t useful because in many cases genetic variants aren’t statistically significant,” adds Kas Subramanian, chief scientific officer, Strand Life Sciences, a Bengaluru-based company that also offers genetic tests. Ms. Acharya, however, notes that genomics testing is still an evolving business in India. “This is a pursuit of science…we have a careful system of having competent genetic counsellors analyse these tests,” she says.