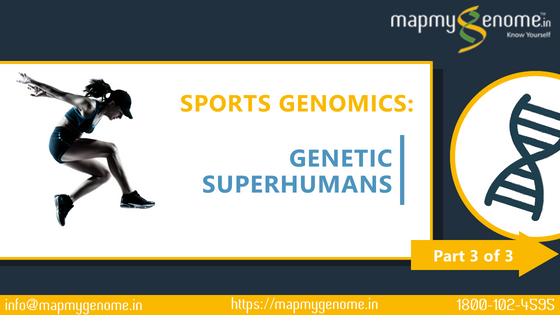 So far, in this three part series, we have seen how one’s DNA can confer a biological advantage upon them, when it comes to sports/athletic abilities (check out part 1). On the flip side we have also dismissed the idea of a sports gene and highlighted the importance of relentless deliberate practice towards achieving one’s fitness/sports goals (Check out part 2).

Having briefly discussed the genetic super-abilities of some super-athletes, the most important question needs to be addressed. Well, so that’s just what we’ll do in this final part of the sports genomics rant.

Picking up where we left off …

So, It’s all genetics eh? Super-athletes are genetic superhumans?

Wouldn’t it be oh-so-sensational if I just said “YES” to this question and moved on?

Nah, that’s not the case…well not always. There are few interesting studies conducted on Major League Baseball players that showed, contrary to popular belief, their reflexes to be around the same as an average person. In fact, Albert Pujols (a giant in baseball!) finished in the 66th percentile, compared to a bunch of average college students!! So what makes these elite more capable than us when it comes to striking that ball flung towards us faster than the eye can track?! Turns out it goes beyond just reflexes. The batters are able to pick up on patterns, body cues to predict where the projectile is headed, and when it will get there – looooong before it actually does. Same goes for Sachin, Lara, Kohli and other “class” batsmen, when they attack bowlers throwing the ball at over 160 kph, or adjust their stance to strike those absolute stunning spinning deliveries bowled by the likes of Shane Warne!

In fact, to test this theory out, Major League Baseball hitters were made to face an olympic softball champion – Jennie Finch. She used a larger ball, thrown at a speed slightly lesser than what the hitters were used to deal with – and despite that, the performance of these “elite” hitters were pathetic to say the least. Why? If it was all about reflexes, wouldn’t this have been an easier task? Just because the wind up of a softball pitcher is different from a MLB player’s, they lost the cues they relied on – and became like you and I. These results were rather surprising…

Having said that though – genetics does play an important role in contributing to the success of some of the elite. Take Eero Mäntyranta. A cross country skiing champion with a genetic mutation in his EPOR gene, that increased his red blood cell count (and thus the amount of oxygen in his bloodstream), won the 1964 Olympics event by a whopping 40 second margin!!

Let’s move to mixed martial arts. Jon Jones, the light heavyweight champion has a genetic advantage that makes his limbs rather long (disproportionately so!). Measuring in at a crazy 84.5 inches (that’s 7 ft in length!) – his long limbs give him the added advantage of getting “inside” his opponent for the offensive, while still maintaining his opponent at arm’s length (yeah 7 ft!) – keeping his defense rock solid.

Usain Bolt, the fastest man on the planet, has a genetic advantage – same as the one seen in elite powerlifters – that allows him to engage more of his fast-twitch muscle fibres than the rest of the people – simply because he has a much much higher proportion of these fibres than the average person. Much like the powerlifters who exhibit the same genetic (and hence, muscular) variation – Bolt is able to hit the ground with a force that’s almost 3 times his body weight (most average people can muster close to twice their weight) – allowing him to “explode” upon pushing off.

It’s actually a balance of all three. But the three are more intertwined than you’d expect.

Trainability is defined as the ability to respond positively (read: well) to certain training. Endurance training serves as a great example here. Some people start off with a relatively high aerobic capacity – needless to say, aerobic capacity is a good predictor of endurance. Some start off at a high baseline, but don’t see any measurable positive shifts in their endurance even after a long training regime, while others achieve the same endurance levels without any significant training whatsoever. (Remember Rasika and Caitlin Gregg??)

Some are just genetically gifted – they carry genetic variants that gift them with a high aerobic capacity. The others who did not get this “gift” might need to put in many many more hours than these guys to reach the same levels of endurance. They might never even get there.

Genetic science narrates that the range in talent is not pre-determined, but rather is based on our trainability. Interestingly – trainability is influenced a fair bit by one’s DNA.

Sounds rather gloomy doesn’t it? Knowing you can train significantly harder than the one next to you, and still not achieve the same elite level of performance? Well, it doesn’t have to be that way. Once you know what YOU are genetically good at (or likely to be) – focus your attention and training around that, while regularly measuring the outcomes.

Looks like we have circled back to genes – central to the whole process. OK then, how do I find out what sport, training regime etc. suits me best? I do a genetic test and follow the report blindly, right?

Well, it’s certainly a starting point advocated by a lot of experts. Understanding your genomic architecture is extremely helpful in understanding what you’d be inherently good at, and where you would need to focus your efforts for improvement. Be it your ACTN3 variation – which would help you choose a sport you’re likely built for, or your training regime in your sport of choice; or your PPARG variation – which would dictate how your body would respond to fats in diet; or any variant in the multitude of genes associated with learning ability, resilience, cardiovascular health, vitamin requirements, injury risk, recovery potential. Reading your DNA is certainly a great starting point in your pursuit of athletic excellence.

Having said that, it’s imperative to remember that a genetic test ONLY gives you a great starting point. So what if you’re not built for endurance? So what if you don’t have a large proportion of type 2 fibres to give you that extra burst of power? Unless you’re pursuing a sport (like a 100m dash), it shouldn’t dissuade you from trying out that sport. Football, cricket, squash, badminton, swimming, basketball…they are all skill based sports, wherein training (and by extension, trainability) play a crucial role, probably even more than how you’re built physically. While it’s known that characteristics such as height, speed, strength and stamina are important (in different combinations) for achieving an elite level in such sports too, there are always outliers. You could be that guy.

Don’t specialise too early. It’s a trend seen globally – and to a large part attributed to the 10,000 hours rule for specialisation – that parents and coaches alike push infants into a sport and specialisation therein, often to the exclusion of other sports and physical activities. This is actually detrimental to the overall development of an “elite athlete”. There ought to be a “sampling period”, especially during puberty to help discover the sport you’re most suited to (biologically too).

Best example of this? Steve Nash – 2 time NBA most valuable player, actually never got into basketball before the age of 12 or 13.

Achieving fitness is multidimensional – you learn about some strengths, few weaknesses, couple of tricks you pick up along the way….and couple of skills that you were genetically blessed with! Kinda makes you realize that if you were to set out on a quest to get into the BEST shape of your life and knock down all those obstacles….reading your source code (DNA) FIRST might be a very, very good thing to do. Maybe you do not need to follow the crowd, maybe YOU (i.e., your body) can surprise you when you start training right, maybe you already are programmed to learn very quickly, adapt to routines, get to your goal and maintain that physique. Or….maybe you need to work harder than the next person. Maybe there’s some things (nutrition, recovery etc) that you need to take care of, during every week that you train. But that shouldn’t bog you down. Knowledge is power!! If you know the right road to choose, you are halfway to the finish line! Know the best way to get fit for life….read your DNA story to Know Yourself.

We leave you with these amazing facts and the best ways to reach out to us (call 1800-102-4595 or write to info@mapmygenome.in) while we figure out if there is a gene which allows us to have our cake…and eat it too! (Nah, there isn’t. But we can hope ? )