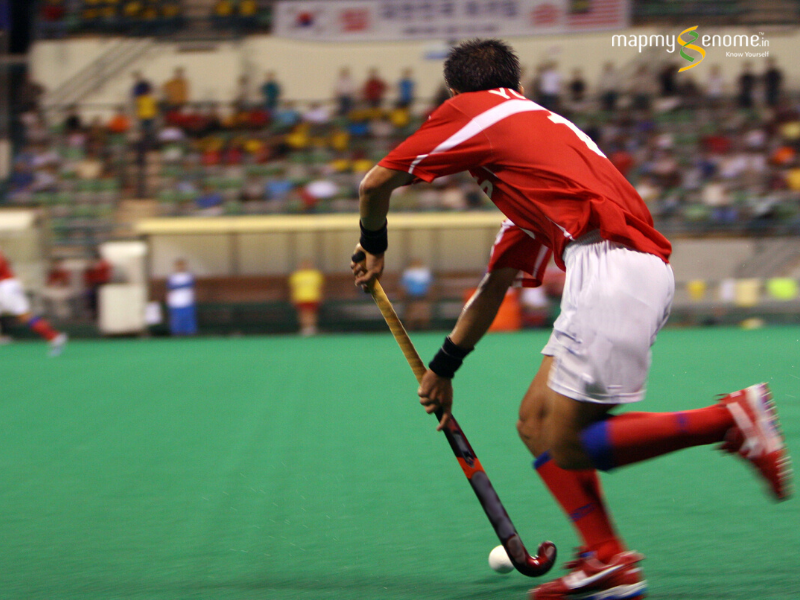 Leslie Walter Claudius, one of the greatest right-backs ever to have played the game is a man of no equal. The way he manoeuvered the ball on the right-wing with sudden surges of energy into the “D” is something every hockey lover remembers with pride and honour. A man built with a short stature like the great Claudius had in him the endurance required to quickly innovate a move and anticipate any tackle from the opposition’s marker. His spirits were, and are so high, remained untouchable and will remain forever so. Those were the days, when the game’s elite was represented by the not-so-tall and not-so-heavily-built South East Asians, i.e., Indians. Yes, we as Indians differ in our strengths and muscles from our European counterparts when achieving sporting excellence, but what exactly makes them great? Some of that, if not to a major extent, has its roots with our genes and hereditary? Surely, there should be some quintessential truth behind the genes of athletic performance?

Blood, a noun so mistakenly mistaken is not so uncommon in the hockey field. Right from defending the team in the ‘final five’, to blocking a bludgeoning tackle in the ‘middle’, to handling the economics part of it, we the hockey players drop blood. Hockey players go through a lot of individual tests all in the name of science and one such includes, blood. As genetic testing evolved to include genomes from healthy individuals, it is only promising to focus on how genes influence the function of lung, muscle, and cardiovascular systems. Broader data pools embedded with technology will give us a chance to meet the science behind athleticism in unknown ways. One particular area where research laid much of its focus was around endurance and strength. At a young age, a child will not have the physical maturity and motor skills required to excel well. It’s a point of motivation and pursuit of their dreams. Genetic testing as a tool comes into the picture here. If one is only depending on the genetic test as an indicator of performance, then there is a likelihood of disappointment. Genetic test will only give an idea about the best type of sport suited for a child. So in our case, the doyens of hockey, K D Singh Babu or Dhanraj Pillay might have just had that genetic component that allowed for unprecedented Olympic success. They might have struggled badly in other sports. Who knows? Well, can we keep Dhanraj Pillay out of the equation in this case? No player/individual will ever come close to the personality and stature of him in any life and generation. Thank you.

One of the extensively studied genes associated with athletic performance is ACTN3, commonly known as the “sprinter’s gene” or “speed gene”. This gene has conditions that produce alpha-actinin-3, a protein that favours fast-twitch muscles to contract strongly at high speeds. Individuals who produce more alpha-actinin-3 are more prone to sprinting than long-distance running. Any variant in this gene will lead to the development of slow-twitch muscle fibres and such individuals are highly inclined towards endurance activities like long-distance running.  Another important finding in the role of genetic variants is associated with muscle strength. Research reports have found 16 different variants that play a part in muscle/grip strength. One such gene was TGFA, commonly called as transforming growth factor-alpha. The role of TGFA in the human body lies in cell division and supporting the growth. Variation in this gene is associated with an increase in muscle strength. However, it has to be kept in mind that though DNA tests reveal predispositions, they should not be thought as foretellers of an individual’s actual athletic ability. Your athletic performance is directly influenced by a host of factors like food and diet, training, skill level, environment, and work ethic and can play a big role in the fitness levels. What your DNA speaks about you goes in tandem with how you approach your fitness regime. For example, let us say an individual has the ACTN3 R577X variant, which favours slow-twitch muscle fibre. That doesn’t mean he/she will fail at powerlifting/ weightlifting. What it tells is, you may have to put extra efforts of sacrifice and hard work to excel when compared with the one who does not have the variant.

It is important to note that genetic markers play a role in talent identification. Talent identification processes (TID) are carried out on simple practices like including sport-specific tasks and are bound for expansion. Modern technologies enable us to estimate whether an individual genotype can affect an athlete’s performance. The ACTN3 and ACE genes have calibre to estimate the athletic prowess in power-based and endurance activities. Mutations in BDNF, COMT and DRD2 genes will open gates in the near future to carry out further research in motor control and development of skill and performance. That said, we should keep in mind that recognizing an athletic talent does not depend entirely on the genetic variants, but rather a combination of genes expressed in a pattern and style.

One major thing genetic testing can do is to provide insights to help us perfectly plan our decisions and approach our training in a more structured and systematic manner. If you face hardships as a sprinter, it can be that your body is more favourable towards endurance activities like swimming and marathon running. Understanding our genetic material will enable us to approach rest and recovery, and avoid injuries. Even though our genes cannot tell everything about us, they can surely guide us in a systematic way as we pursue better health and improved athletic performance. More importantly, if you want something very badly and are determined to excel no matter what, you will be unstoppable.

At Mapmygenome, our focus is mainly on predictive risk assessment, maintaining a proper diet, adapting to a healthier lifestyle. We focus on preventive healthcare and wellness. With screening tests like MyFitGene, you can personalize your training and diet while understanding the strengths and weaknesses of your body. If you know the right road to choose, you are halfway to the finish line! Know the best way to get fit for life, read your DNA story to know yourself completely.