Sports genomics: Is there a sports gene? (Part 1 of 3) 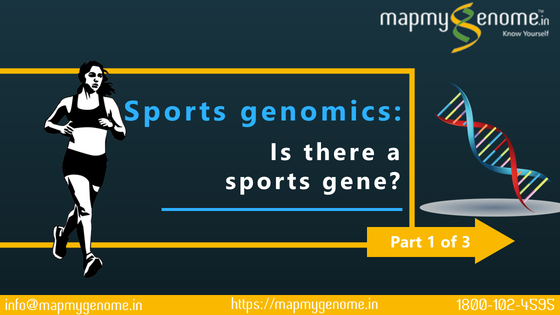 A senior analyst at our company had never really run a real race, never trained for a marathon, never even given any real thought about long distance running – but there she was last winter, standing at the start line of the Airtel Hyderabad 10K run, at 0600 hours on a Sunday, stretching out her muscles, calming her nerves, preparing herself for the arduous task that lay ahead. A task that was by no means an easy one – a gruelling 10 Km course through asphalt, cement, dirt and synthetic tracks, across hilly regions and long gruelling plains, oh and a bloody flyover at the 7Km mark – a time when one’s resolve isn’t the only thing that’s on the verge of breaking…

A hardcore fitness enthusiast, Rasika, our Senior analyst, never really shied away from any sport, or any type of a physical challenge – new and unnerving, or tried and tested. However, by her own admission, as she stood at the start line waiting for the race to commence, she felt rather anxious about the task that lay ahead. “I remember thinking this would be one heck of an arduous task – Would I be able to make it beyond even the half-way mark? Straights are fine, but I’ve never really run on slopes; What if my legs start cramping up? I’ve never really trained for this kind of stuff…wait…Did I just bite off more than I can chew?”

And so she started the race, slowly at first, conserving her energy, not knowing when those stores would deplete. Eventually, her pace quickened as she realised that while lots of other runners slowed down, or resorted to walking up slopes or along that long stretch of asphalt, she was able to breeze past them, without too much effort. “That felt pretty awesome, I won’t lie” Rasika reminisces. “I could push myself harder, a lot harder than the others around me, seasoned runners or clueless newbies like me”. She ended up not just exceeding her own expectations, but outperforming other older, and even seasoned runners.

While her love for science, and pursuing a job therein, held her back from exploring a career in running and other endurance events, participating in such events has now become something she’s very passionate about.

That wasn’t the case with Caitlin Gregg however. Running her first race at the age of 14, with much the same thoughts as those running in Rasika’s head at the time, she came out with flying colors! The endurance race event held in Vermont’s Mad River Glen is no joke – even for the toughest amongst us – and Caitlin, a 14 year old, untrained, unprepared, endurance event virgin, conquered it! Finishing ahead of even some of the supposedly “elite” athletes, she navigated her way through a 2000 feet vertical climb (no trail, no markings!),  followed by a 3-mile long descent through rocks, forest and dirt tracks, without breaking her breath or resolve! Fast forward 20 odd years of turning passion into profession – A 4 time NCAA All American running champ, an olympian, and a 2015 world championship bronze medalist in cross-country skiing, today Caitlin Gregg is hailed as an elite amongst the elite!

Turns out she and Rasika both have something special, something the vast majority of us (even those who are athletically-able, and -inclined) do not: A biological advantage!

That’s ONE variation out of 3 x 10614 variations in your DNA that can spell out something absolutely incredible, or something not-so.

I’ll take this space to address some of the questions I get asked most often about sports genomics. Some things to muse over…

What is the sports gene? A gene that defines whether I’ll be a footballer, cricketer, swimmer or a boxer?…..

What makes an athlete great?

Are the world’s greatest athletes born that way, or do they build something that was never there before?

Sports genomics demystifies the link between athletic performance and genetics. Be it basketball players who defy all odds and win the game or an Olympic swimmer who breaks records every year…there IS something that’s helping them play to their strengths. Yes, they train every day, hour after hour, but they also reap a phenomenal response from it  – killer build, elite fitness levels and a shining career. When scientists investigated the varying levels of athletic prowess across players, they also looked into their “source code” (read, DNA). We now have the answers to many questions like those above.

So, circling back to the question….IS there a sports gene? Watch this space to find out more. We promise bring you the answers in less than 24 hours!