Sports genomics: Is there a sports gene? (Part 2 of 3) 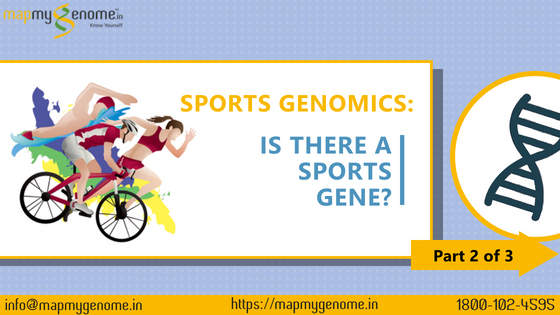 Do all great sportspersons build their athletic prowess from scratch, or do they have a biological advantage? In the previous post of this three part series, we highlighted a couple examples that beg this question. (If you haven’t read that post yet, you really must! It’s pretty cool!)

Picking up where we left off – Is there a sports gene? The rather hyped up “gene” that makes or breaks our fitness/athletic/olympic dreams.

Let’s find out, shall we?

So is there a sports gene? A gene that defines whether I’ll be a footballer, cricketer, swimmer, boxer…..

The short and sweet answer? NO.

There’s no such thing as a single sports gene – It’s more a metaphorical (and one hyped by media) concept. It would be pretty darn awesome if there were, but much like most other things in life, excellence in sports is multifactorial (even at a molecular level).

Having said that however, there are certain cases (obviously depending on the sport in question), where the right genetic variants are not just sufficient, but essential, for elite performance. Think height for a place in the NBA playoffs…

One example which, at the offset, may not seem as obvious – If you don’t have the “correct” copies of the ACTN3 gene that confers upon you a genetic advantage for sprint sports – you can be fairly certain you won’t find yourself at the starting line of the 100m final at the Olympics anytime soon. Variants of the ACTN3 gene – think proportion of slow twitch (endurance) and fast twitch (power/sprint) muscle fibres in your skeletal muscles – explains such minute variations at high levels of performance.

To think that ACTN3 or some other single gene is then responsible for sporting abilities and achieving success therein is incorrect. What genetic science is uncovering is that arguably the most important part of “talent”, is trainability (or your ability to respond to training stimulus) – a complex biological setup that allows you to train better than others. If that setup is not configured right, you could train day and night, hammer at it through rain and shine, but you might still fall short of achieving elite levels. Ah the 10,000 hour rule. Introduced to the world by Malcolm Gladwell in his award winning book – Outliers, this “rule” has percolated the system rather efficiently, with people taking to it like a kid to candy. While believing it sure helps you reason out your weaknesses, does it really hold true?

The 10,000 hour rule is the idea that 10,000 hours of “deliberate practice” is necessary, and sufficient, to achieve excellence in everything (or almost everything). Here are some issues with that theory – this notion was developed by studying 10 violinists from a world class academy who had accumulated over 10,000 hours of practice by the age of 20, and mapping their skill against those who hadn’t clocked those hours. The sampling was flawed in its premise – the fact that these 10 violinists were taken from a bunch of high performing violinists from a world class academy, already screened out much of humanity.

Since then, this “rule” has been challenged extensively – specifically in sports, with a study out of Princeton showing that the effect of 10,000 hours of deliberate practice was heavily dependent on the field of study and the nature of the same. In sports, it attributed to about a 26% difference in the final outcome. Not bad. But certainly not the only defining component.

The part of the 10,000 hour “rule” (let’s call it a notion), that is oft left out of discussions is the assumption that one hour of deliberate practice effects skill progression to the same extent in each individual – an assumption that has been torn apart by every genetic study done so far. Each genome (read: every person!) is unique; even between parents and siblings, leading to different responses to the same kind of stimuli – in this case, the same training routine.

10,000 hours has become somewhat of a catch phrase to emphasise the importance of practice – something that was never contraindicated or even doubted by anyone…ever! But to believe that this “rule” is necessary or sufficient for elite performance is a flawed belief.

So Super-athletes are genetic superhumans?

I have to leave something for the third part now don’t I? While I’m not addressing that question today, I do leave you with the promise that I’ll answer that question within 24 hours!