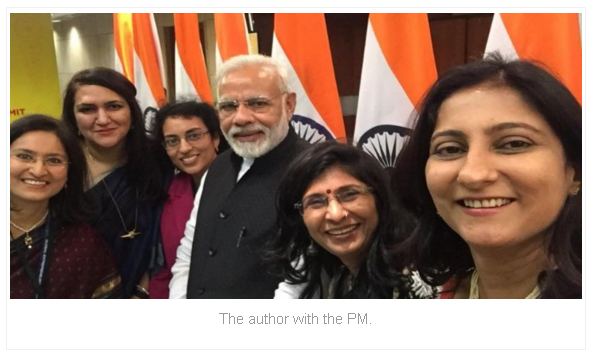 Honestly, I did not know what GES was until this year. I first heard about it from NITI Ayog, the premier think tank of India, for which I have tremendous respect.

I was subsequently invited to speak and moderate a panel on “From the Lab to the Market: Connecting Science to the Entrepreneurship World”. It sounded like a good conference to attend and meet some interesting people and get some new perspectives.

Then, as the city readied itself for this mega event with 1500 participants from 150 countries with a theme to empower women by getting more than 52 percent participants as women, I was taken aback by the massive focus on Ivanka Trump for somewhat wrong reasons, as is usually the case when women are in focus. I hope we can change that thought process soon.

The inaugural function was a display of some technologies but with a lot of hi-tech dances and speeches. The best part about this was that although it was delayed, I had great company (Vani Kola, Radhika Aggarwal, Megha Mittal, Anjali Bansal, Rama Akkaraju, Anousheh Ansari, and more rockstars) and the discussion was awesome.

The only challenge was the charging of our phones which weren’t as charged up as we were. The good, albeit a little tensed up volunteer brought us one battery pack that we all shared, but soon after I reached the palace, the phone was dead again as the bus ride and waiting was over two hours.

One of the things that I hope changes in the next few years is the number of women at the main table. There was a table for 101 people at the Falaknuma palace to have dinner with the PM and Ivanka. At the table, the number of women was nowhere close to 52 percent as the rest of the conference was. I was lucky to be one of them, but hopefully, next time the ratio is closer to 50-50.

The person who was the most impactful and powerful according to me at this summit was Cherie Blair who drove the points home about how men need to do their share and that India was leaving behind a largely untapped resource in women that are graduates and those who don’t get educated. Strong and impactful, yet humble and accessible. I was glad to get an opportunity to meet her at the palace and take this fan girl picture with her. Day two was a flurry of launches, lunches, and some punches (metaphorically, of course). I was part of the launch of the Wadhwani Foundation’s Global Network for Entrepreneurs, media interviews, and networking. The evening was a grand display of culture and art by the Telangana government at the Golconda Fort. Day three was my panel early in the morning. I had on my panel, Dr Sonam Wangchuk, an amazing and delightful person who is often thought to be the inspiration behind the character in ‘3 Idiots’. Something he doesn’t agree with. The other panelist was Dr Ramesh Jagannathan, Vice Provost at NYU, Abu Dhabi. We had a lively discussion with the audience and came up with several points to follow through (hopefully).

The final dinner was at the hotel and there was light jazz playing in the background in the beginning and then a DJ that got the entrepreneurs dancing. While interacting with many entrepreneurs from several countries, one of them handed me a jam from Jamaica which I loved.

I met entrepreneurs from Fiji, the US, Jamaica, Canada, Bangladesh, UK, and more. The bonds that tie entrepreneurs together – the joy of changing the world, one product, one service, one customer at a time to impacting millions of them – is indeed strong.