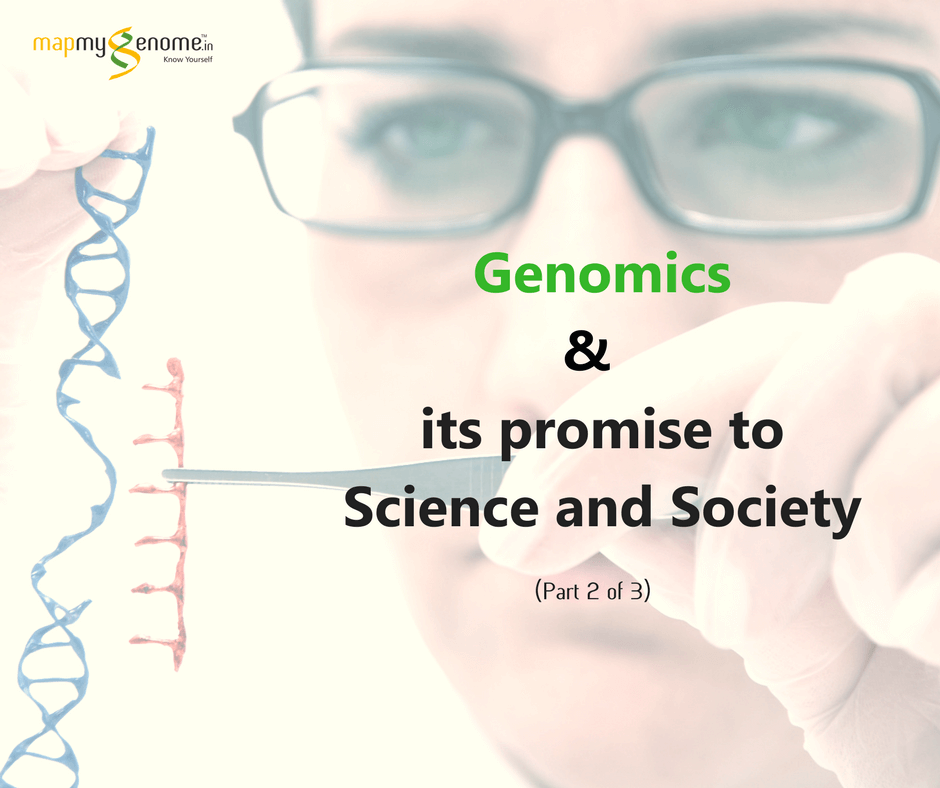 ….Welcome to Part deux in the series on Genomics; how it’s impacted the field of science and society, and how it will continue to do so.

Towards the end of the last post, we went over the insights gained from the generation of the first human genome sequence. So the Human Genome Project (HGP) ended – but the end of each day heralds a new dawn.

Genetics and the era of “new medicine”

The fact that DNA governs almost every aspect of human health, both in function and dysfunction thereof, was among the biggest learnings from the HGP. The involvement of DNA in these processes was never a doubt, but the mammoth extent of its involvement was a major finding. A detailed picture of  the interactions between genes, other DNA sequences and environmental factors brought about a deep understanding of the pathways involved in both – normal function, as well as in disease pathogenesis. This vital knowledge has, since then, transformed the healthcare industry and continues to  create a profound impact on the diagnosis, treatment and prevention of health disorders. Some of the most impactful developments transforming clinical care and public health include :

DNA based tests were among the earliest clinical applications of the new genetic knowledge acquired from the HGP. These tests have a variety of healthcare applications– right from the diagnosis and/or confirmation of disease, even in asymptomatic persons, to understanding the prognosis of disease, and the predisposition of risk of future diseases in healthy individuals as well as their progeny- with an ever-increasing degree of accuracy. The number of diagnostic testing options available in the market is on the rise, with new testing options regularly being added to the repertoire. These tests look for variations in specific genes known to play a role in disease causation of  single-gene disorders. Other DNA-based tests  available today, such as Genomepatri, employ genomic information to establish the risk of disease in healthy individuals with a family history of the  common, multifactorial conditions that are caused by the interaction between several genetic as well as environmental factors. The most salient benefit of this type of a test is the advantage of individualized information that helps not only the person who gets tested play an active role in their own healthcare and prevention, but also helps their physician manage the disease or condition more effectively. For instance,  individuals with DNA variations associated with a high genetic risk for colon cancer can be advised to make recommended dietary and lifestyle modifications aimed at risk reduction, and can follow guidelines for targeted screening via regular stool tests (fecal occult blood) and colonoscopies, potentially preventing thousands of deaths each year. It is important to note here that in the case of Genomepatri-esque tests, the demographic or ethnicity makes a significant difference during test result interpretation, since mutations can be conserved amongst certain populations, thereby having different health indications for two individuals belonging to different population subsets.

Families and individuals who have genetic disorders, or a risk thereof, can seek help from our certified genetic counselors, who have experience and expertise  in identifying and discussing potential diagnoses, reviewing and recommending testing/screening options, explaining reports with patients and doctors, and providing educational as well emotional support. Another field of study following the successful completion of the HGP is the specialized application of genomic data its implementation to pharmacology with the aim  of personalising therapies, medications and treatments. This field of study is called “Pharmacogenomics”.  Over 100,000 people die each year due to adverse reactions from drugs that may prove to be beneficial to others . Further, while over 2.2 million people worldwide experience  serious, though non-fatal, reactions to the sug compounds, others may not respond to it at all. DNA variants in the genes associated with drug metabolism, have been shown to play a major role in determining drug efficacy and adversity in individuals. Genetic tests like MedicaMap scan your DNA for these variations, to assess an individual’s response to a given drug – whether in terms of the likelihood of proper drug efficiency, or the chance of occurrence of adverse reactions, or both. MedicaMap is a once in a lifetime test that provides pharmacogenomic information for over 100 FDA approved drugs, personalised to your genetic individuality (aka your ‘genotype’).

Advances in technology and the emergence of testing services such as MedicaMap, are quickly enabling rapid testing for the determination of a patient’s genotype, and the administration of drugs most suitable to that individual, while reducing the likelihood of adverse reactions. Expansion of genomic data available to us, and advancements in research and available technologies also means that drug development will now be a faster, cheaper and more effective process. While most drugs today recognise molecular targets, genomic knowledge of genes and pathways involved in diseases, , and drug-response sites has led to the discovery of thousands of new targets. Genomic drugs are being synthesised to target specific sites in the body, in sync with specific biochemical events leading to disease onset. This means that the drug  could be administered much earlier in the disease process, saving valuable time, money and possibly saving a lot more lives. The future of medicine is rather awesome!!!

The potential of using genes themselves for the treatment of disease, or the enhancement of desired traits, has captured the interest of the biomedical community, and tickled the intrigue of the public at large, for the better part of the last 2 decades now. And why shouldn’t it? Gene therapy holds immense potential in the treatment, even cure, of genetic and acquired conditions such as cancers and even AIDS, by the use of normal or synthetic genes to supplement or replace defective genes, or to augment a normal function, such as the body’s immunity. Back in 2006, close to 1200 clinical gene-therapy trials were already underway (mostly in the USA and EU), focusing on various cancers, and multi- and monogenic, infectious and vascular diseases. Since then, the number of clinical trials has skyrocketed, thanks to the ever-increasing interest in gene-therapy and the promise it holds ; and the advent of gene-editing technology (think CRISPRs, TALeNs).

You want to read this!

Gene Therapy in humans: Yes, it happened. While there were quite a few who received gene therapy in 2016, I wish to focus on Eliza O’Neill as an example of the beauty and power of this therapeutic technique. Eliza suffered from Sanfillipo syndrome (Type A), resulting in her inability to speak. Today, thanks to corrective gene therapy, she is now SINGING! Watch her sing with her dad, chiming in with lyrics to their rendition of “This Old Man”. Quick note: This video was shot barely 6 months following gene-therapy. Eliza after her gene therapy (source)

After keeping her quarantined at home for almost two years (to avoid contacting any viral infections that would disqualify her from the clinical trial), Eliza’s parents signed her up for the Sanfilippo Syndrome type A trial. Apart from the apparent physical evidence, even biochemical tests point to the fact that gene therapy is in fact working!

Another young girl, Hannah Sames, finally underwent gene therapy during the summer of 2016, for giant axonal neuropathy (GAN). While it may be too early to ascertain whether the corrective gene is now synthesising gigaxonin, Hannah has been put on a regimen of exercise and diet to rebuild muscles and help the motor neurons rejuvenate those muscles. Watch this space for the third and final part of this series, where we would discuss the potential genomics holds in shaping the world in the years to come.