These Celebrity Deaths Have Many Asking: How Likely Are Heart Attacks In Your 50’s? 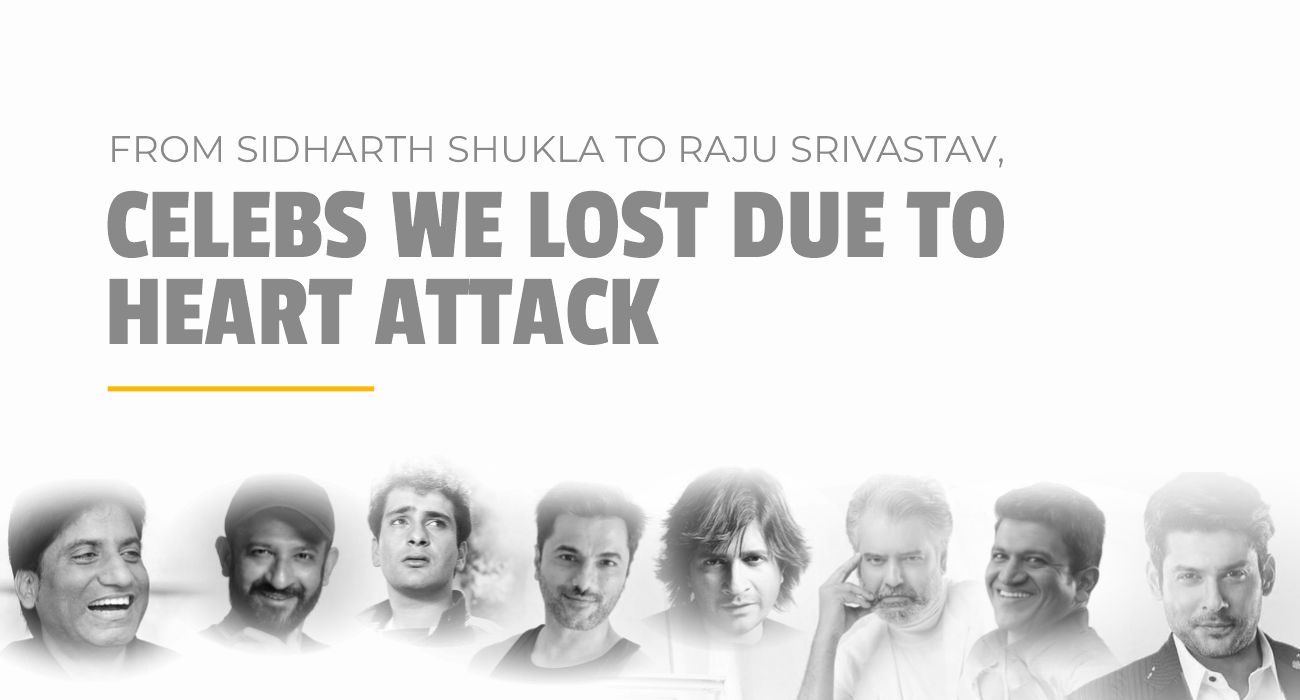 In another shocking case of an actor collapsing while working out, TV actor Siddhaanth Vir Surryavanshi died on Friday at the age of 46 after he reportedly fell unconscious in the gym.

Siddhaanth’s death adds to a disturbing number of celebs- seemingly fit and active-passing away at a young age due to heart attack also known as Myocardial Infarction.

Raju Srivastava (58)
The noted comedian Raju Srivastava had a heart attack while exercising in the gym. He was admitted to the hospital but died after fighting for more than 40 days to stay alive on a ventilator.

Krishnakumar Kunnath aka KK(53)
The fans of KK won’t be able to listen to his hit song ‘Pal’ the same way as it was his final song in the concert where he succumbed to heart attack on May 31. The singer complained about discomfort and experienced a severe heart attack. The doctors immediately proclaimed him dead on his arrival at the hospital.

Puneeth Rajkumar (46)
Kannada superstar Puneeth Rajkumar who is fondly referred to as Appu passed away on October 29, 2021, after he suffered a cardiac arrest while rushing to the hospital. Puneeth had complained of chest pain while exercising in the gym.

Sidharth Shukla (40)
Renowned TV actor and winner of Big Boss 13, Sidharth Shukla’s death was a shock to everyone. He passed away at the age of 40 on September 2, 2021. The reason for his death- heart attack.

Vivek (59)
Popular Tamil actor Vivek passed away on April 17, 2021, due to heart failure. The comedian was a renowned personality in Kollywood.

Rajeev Kapoor (58)
Actor Rajeev Kapoor was known for his performances in films such as “Ram Teri Ganga Maili”, and “Lover Boy”. He died on February 9, 2021, due to a heart attack.

These cases of celebrities highlight the importance of heart health

Earlier Myocardial Infarction (heart attack) was known as a disease of old age and usually, people above the age of 60 were prone to it. But the scenario has changed since COVID-19. In the last two years, an increasingly younger population are falling prey to this disease.

In March, this year, the news of Australian cricket icon Shane Warne’s death due to a heart attack at the age of 52, left many of us reeling. Warne’s final Instagram post revealed he had started a rigorous workout routine to get back into shape. He called it Operation Shred and wanted to get fit immediately. Raju Srivastav, Siddhanth Vir Surryavanshi, and Puneeth Rajkumar suffered heart attacks while exercising.

So the question on everyone’s mind is how likely one is to suffer a heart attack at a young age. Cardiac events could be triggered when people with high genetic risk for cardiac conditions suddenly start rigorous workouts. Pre-existing conditions like diabetes and hypertension and other high-risk lifestyle habits like smoking, and sedentary lifestyle, family history of cardiac issues elevate one’s risk for cardiac conditions.

Recently cardiologists have been talking about the need to know your cardiac risk and make necessary lifestyle changes to manage heart conditions. They also note that if a young person had collapsed without warning, it might indicate a high genetic predisposition or risk to certain heart conditions.