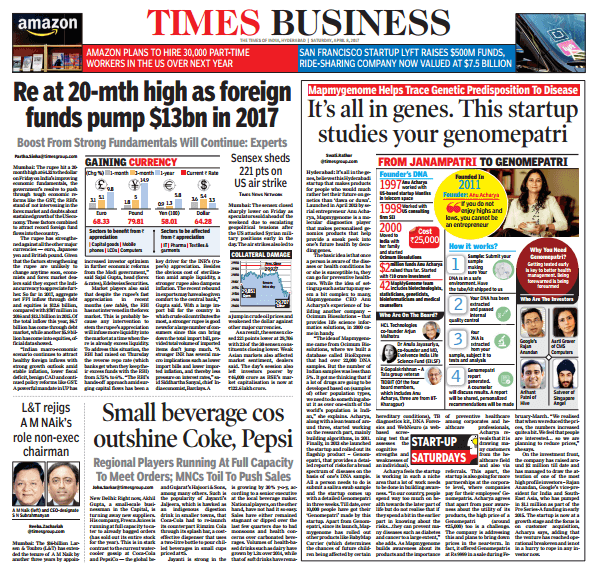 Hyderabad: It’s all in the genes, believes this Hyderabadi startup that makes products for people who would much rather bet their future on genetics than ‘dawa or duwa’. Launched in April 2013 by serial entrepreneur Anu Acharya, Mapmygenome is a molecular diagnostics player that makes personalised genomics products that help provide a sneak peek into one’s future health by decoding genes.

The basic idea is that once a person is aware of the diseases or health conditions he or she is susceptible to, they can go for preventive healthcare. While the idea of setting up such a startup may seem a bit complex to many, Mapmygenome CEO Anu Acharya’s experience of building another company — Ocimum Biosolutions — that provides life science informatics solutions, in 2000 came in handy.

“The idea of Mapmygenome came from Ocimum Biosolutions, where we built a database called BioExpress that had over 22,000 DNA samples. But the number of Indian samples was less than 5%. It got me thinking that if a lot of drugs are going to be developed based on (samples of) other population types, we need to do something about it as over one-sixth of the world’s population is Indian,” she explains. Acharya, along with a lean team of around three, started working on the research part, mainly building algorithms, in 2011. Finally, in 2013 she launched the startup and rolled out its flagship product — Genomepatri, that provides a detailed report of risks for a broad spectrum of diseases on the basis of one’s DNA sample. All a person needs to do is submit a saliva swab sample and the startup comes up with a detailed Genomepatri in three weeks. Till date, over 10,000 people have got their ‘Genomepatri’ made by this startup. Apart from Genomepatri, since its launch, Mapmygenome has rolled out other products like BabyMap Carrier (which determines the chances of future children being affected by certain hereditary conditions), TB diagnostics kit, DNA Forensics and WebNeuro (a web-based screening test that assesses the cognitive strengths and weaknesses of an individual).
Acharya feels the startup is working in such a niche area that a lot of work needs to be done in building awareness. “In our country, people spend way too much on health towards the later part of life but do not realise that if they spend a bit in the earlier part in knowing about the risks…they can prevent many diseases such as diabetes and cancer to a large extent,” she adds. As Mapmygenome builds awareness about its products and the importance of preventive healthcare among corporates and healthcare professionals, Acharya reveals that it is drawing many customers from the healthcare field and also via referrals. This apart, the startup is also going for more partnerships at the corporate level, where companies pay for their employees’ Genomepatris. Acharya agrees that apart from poor awareness about the utility of its products, the high price of a Genomepatri (around Rs 25,000) too is a challenge. The company is addressing this and plans to bring down prices in the near-term. In fact, it offered Genomepatris at Rs 9999 in a sale during February-March. “We realised that when we reduced the prices, the numbers increased quite a bit. We feel that people are interested… so we are planning to reduce prices,” she says.
On the investment front, the company has raised around $2 million till date and has managed to draw the attention of one of the most high profile investors — Rajan Anandan, Google’s vice-president for India and South-East Asia, who has pumped in $1.1 million as part of the Pre Series-A funding in early 2015. The startup is now at a growth stage and the focus is on customer acquisition, Acharya says, adding that the venture has reached operational breakeven and is not in a hurry to rope in any investor now.
Originally published: http://timesofindia.indiatimes.com/business/india-business/its-all-in-genes-this-startup-studies-your-genomepatri/articleshow/58073088.cms
← Previous Next →
Related Posts
Comment(s)
Author Bio
Related Products