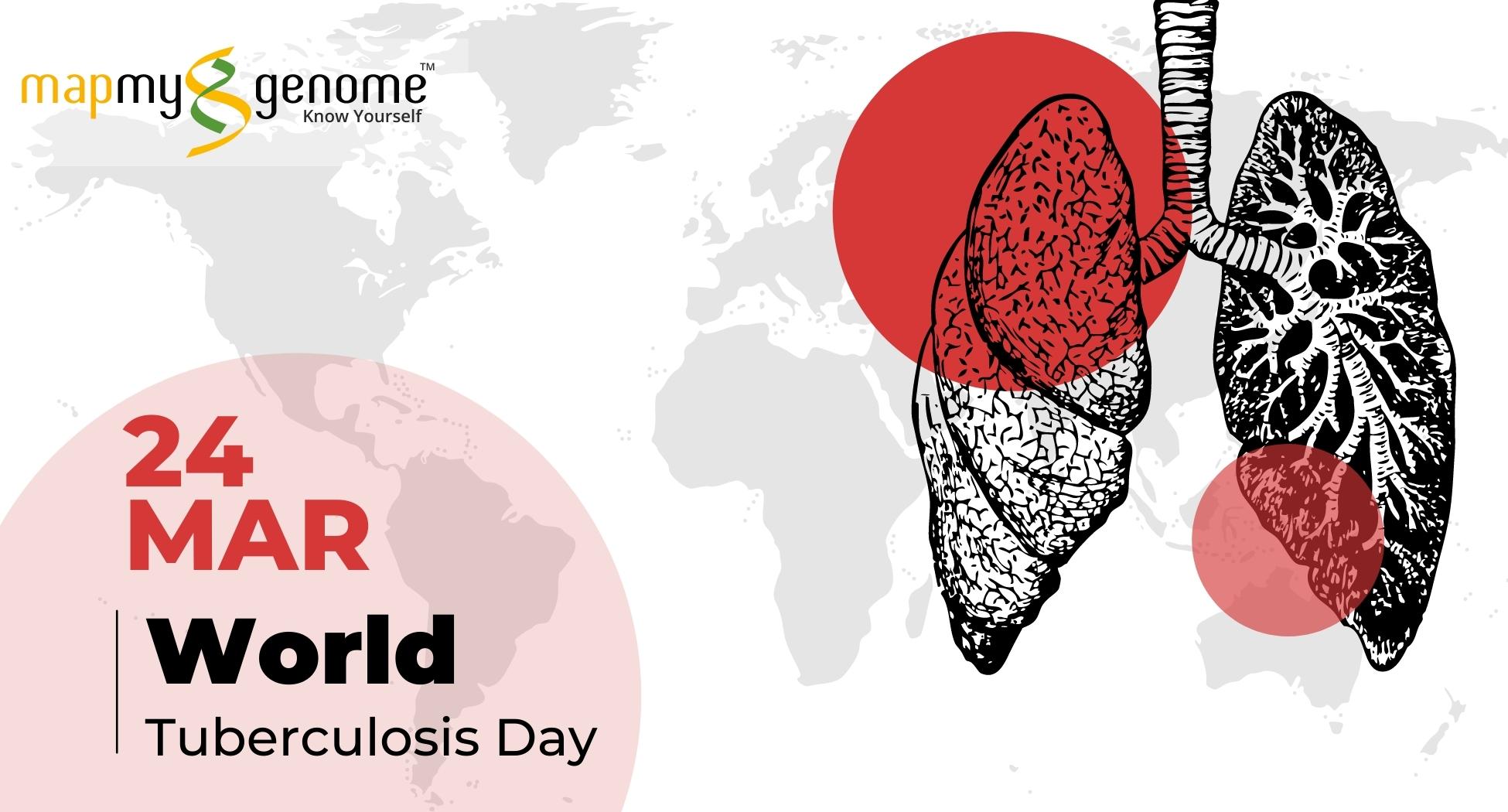 Tuberculosis (TB) is an airborne infection that mainly attacks lungs and may spread to different parts of the body. The causative agent is Mycobacterium tuberculosis species.

The World Health Organization (WHO) estimates for 2016 indicate that 1.2 million HIV negative people and 0.4 million HIV positive people died of TB (1). Drug resistance in TB is a major killer in TB infected individuals. This is because the first antibiotic to fight tuberculosis has been in use for more than 60 years and the TB bacterium has developed an ability to resist this drug. Some species of Mycobacterium have also developed resistance to commonly prescribed antibiotics such as amikacin, kanamycin, fluroquinolones, etc. The level of resistance is further classified based on the resistance pattern for each antibiotic that influences several mutations patterns in Mycobacterium genes, which results in extensively drug resistant (XDR) or Total drug resistant (TDR) strains. Organisms that are resistant to at least two of the most effective anti-TB drugs, Isoniazid and Rifampicin, cause multidrug-resistant (MDR) tuberculosis.

The WHO has recommended global actions plans for reducing TB burden and the expectations are cost effective tools and treatment interventions along with strong commitment and increased funding support (2). Tuberculosis bacteria spread from one person to another through tiny droplets or aerosols released into the air via coughing and sneezing. From an infected person who is not diagnosed with TB and treated, active tubercle bacilli can spread through spittle or sputum. Extra-pulmonary tuberculosis occurs when infection occurs in different parts of the body such as kidney, spine, brain, or the lymph nodes. The signs and symptoms may vary according to the specific organs infected with tubercle bacilli; for example, tuberculosis in kidney shows symptoms such as blood in urine or tuberculosis in spine can manifest as back pain and several related complications. 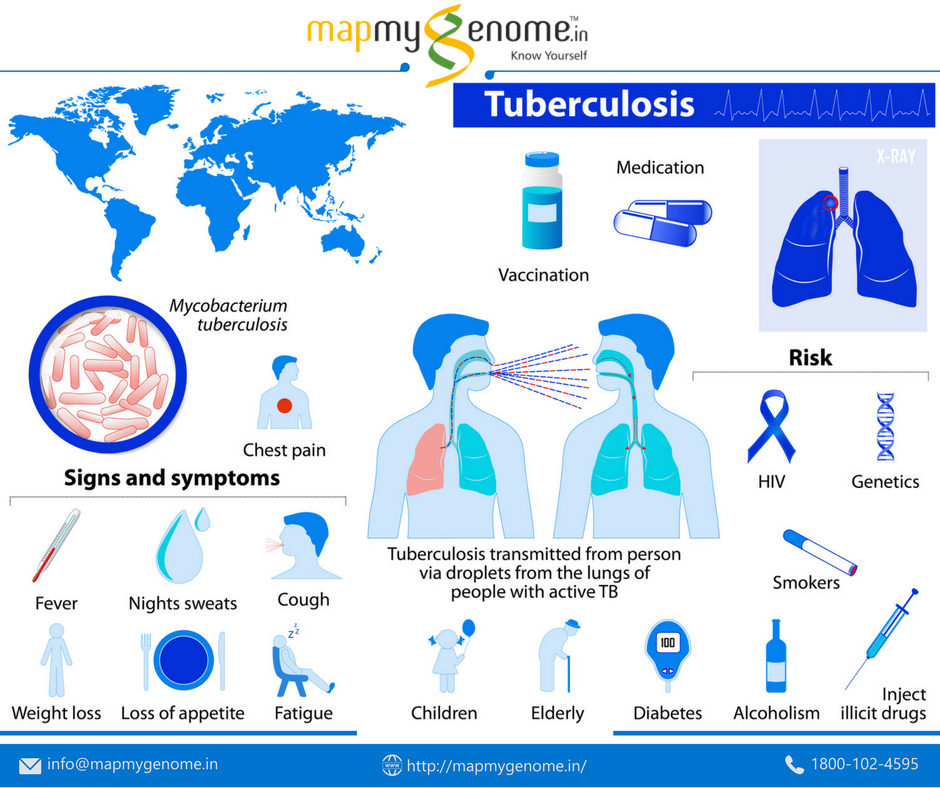 Doctors can easily distinguish between Latent TB and Active TB. The immune system plays an important role in preventing the latent bacteria from turning into active TB.

Signs and symptoms of active TB

A healthy immune system can successfully fight TB bacteria. However, when the immunity is week or has low resistance, it can lead to tuberculosis infection. This happens in people living with HIV and diabetes, receiving chemotherapy, or who are malnourished. Medications prescribed to treat diseases such as rheumatoid arthritis, Crohn’s disease, and psoriasis can weaken the immune system.

Since HIV/AIDS was first reported in early 1980s, the number of TB cases has increased due to weak immunity among the HIV affected. The HIV virus is likely to cause co-infection with other organisms including TB bacteria by suppressing the immune system and making it difficult for the body to control TB bacteria. Hence, HIV-infected individuals are at high risk to acquire TB infection that can progress from latent to active disease.

TB diagnosis using smear microscopy and mycobacterium culture is the most widely used method that involves the examination of sputum to identify mycobacterium under a microscope. This involves identification of drug resistant strains of Mycobacterium from liquid culture with a period of six-week incubation. Drug susceptibility testing is often performed on solid or liquid cultures and this provides information on TB resistance patterns and susceptibility to specific drugs. Identification of drug resistance strains will help in prescribing effective treatment regimen.

GeneXpert is a widely used molecular diagnostics test that detects strains resistant to rifampicin, a first-line antibiotic used for treatment. The test is rapid and detects in less than 2 hours.

The main disadvantage is that it analyzes only rpoB gene for RIF Mutations and no other important genes such as katG for INH Resistance, which is also a biomarker for MDR Resistance.

Two other molecular tests that can detect TB and resistance to rifampicin are Genotype MTBDR, and Inno-LiPA Rif TB. Inno-LIPA Rif TB can also detect resistance to isoniazid, another key first-line TB drug. These are also called as line probe assays. The TB DNA is detected using a coloring agent that indicates the gene mutations with drug resistance.

This method uses liquid culture to test the growth of TB Bacteria in the presence of selective drugs. Growth indicates strains resistant to specific drugs. The main disadvantage is that it takes several days for screening drug resistance.

Tuberculin skin test (TST) is performed by injecting a purified protein derivative of the bacterium under the skin. The main disadvantage is that it cannot distinguish between active and latent TB and hence can give false-positive results in people vaccinated with BCG vaccine.

Interferon gamma release assays and other serological marker tests are blood based assays that only measure a person’s immune response to Tuberculosis.

Mapmygenome currently offers MDR Screening based on PCR Amplification and analysis of rpoB and KatG gene sequences. Most RIF-resistant strains carry mutations in RRDR of rpoB gene. The most prevalent INH mutation found to occur in katG gene is AGC to ACC at codon 315 or Ser315Thr (S315T) substitution. Current molecular tests only analyze rifampicin resistant rpoB gene that encodes the β subunit of bacterial RNA polymerase (with 95% mutation frequency at specific codons).

The rpoB MDR-RIF may not be sufficient to consider as MDR resistant based on literature, as RIF’s resistant strains are also resistant to INH. It is also observed that the katG gene accounts for 70% of mutation frequency and contributes to drug resistance. Hence, this gene is also an important and reliable marker for MDR Resistance.

Multidrug-resistant TB patients are prescribed a combination of medications for 20-30 months. Treatments include fluoroquinolones and injectable antibiotics such asamikacin, kanamycin, and capreomycin. Some newer classes of antibiotics such aslinezolid and bedaquiline are considered more effective in treating drug resistant patients.

Medication may have some side effects

Vaccination and Diagnosis in India

In countries such as India where tuberculosis is more common, infants are vaccinated with Bacillus Calmette–Guérin (BCG) vaccine to prevent severe tuberculosis infection in children. The most commonly used diagnostic tool for tuberculosis is a simple skin test (Mantoux). This test involves a small amount of Purified protein derivative (PPD) tuberculin injection just below the skin of inside forearm. Then within 48 to 72 hours, the arm is checked for swelling at the site of injection. A hard, raised red bump indicates likelihood of TB infection. The size of the bump determines the significance of infection.

Guidelines To Protect Others from Acquiring TB Infection

Individuals carrying active TB or latent TB can prevent spread of infection to friends and family by taking the following precautions:

Multidrug-resistant tuberculosis poses a formidable challenge to TB control due to complexities in diagnosis and treatment. It has become critically important to rapidly identify genes responsible for multi-drug resistance for therapeutic and epidemiological investigations. Hence, it is essential to screen rpoB, katG, and other genes with high frequency mutations to confirm MDR Resistance. Further investigation or screening of these novel mutations may be helpful in the development of diagnostic tools for the detection of MDR-TB in a high TB endemic country such as India.