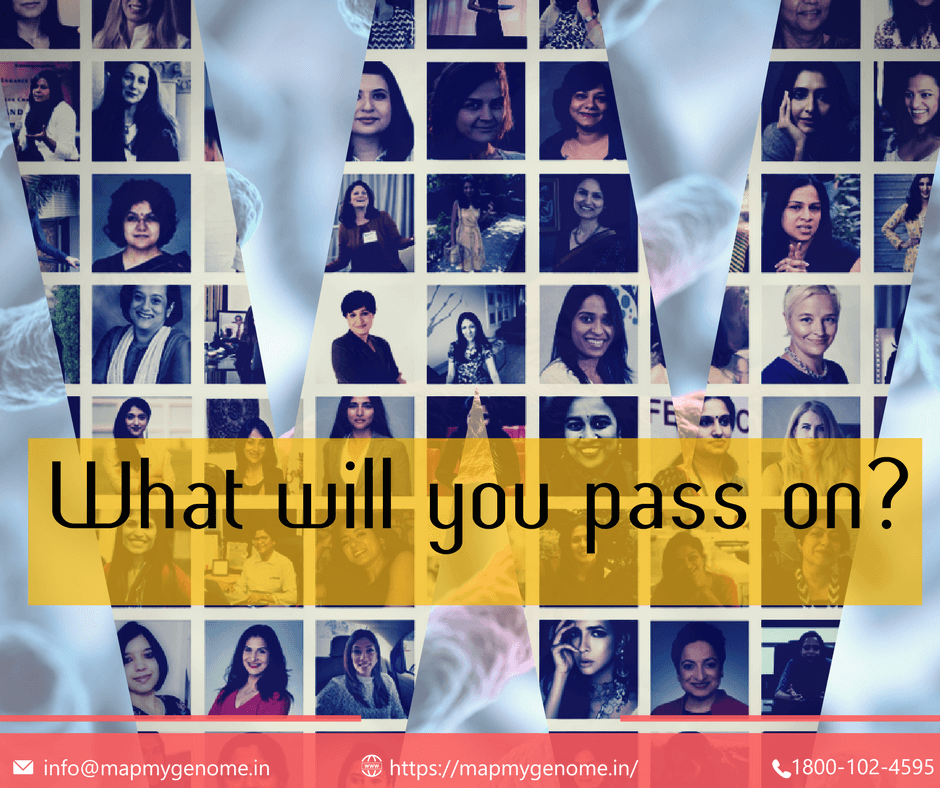 During their journey (for many decades? centuries? … we don’t know!) of proving that it’s not always a man’s world, generation after generation, women retained, honed, and passed on traits. Call it survival of the fittest or nurturing the next generation to be relentless and fearless.

When we asked some achievers what trait would they like to pass on to their daughters, the most sought-after trait was RESILIENCE. Some see it as the power to charge through sticky situations or call it the ability to “hustle harder, without fear of failure.” Others perceive it as the key to keeping your heart strong and keeping emotional balance.

The other traits that received a lot of attention were self-belief, courage, and independence. It is about time that the next generation is more courageous and independent than the previous ones.

Another trait that was desired was perseverance. Indeed, perseverance has given voice to the silent battle women have endured for many centuries and turned them into #Metoo campaigns or Women’s Rights marches across the globe!

So today, on International Women’s Day, regardless of your gender, we want to ask you, what would you like to pass on to your daughters? Let’s be the change we want to see!

The way we look at it, the next gen women will be CRISP (Courageous Resilient Independent Self believing and Persevering)!

The world would love to know the secret to their success. How are some women more resilient than the others? Amazing mentors who taught them or…. just the  “right mental programming”? Science says it’s BOTH! Having a plethora of enriching experiences can teach you to be resilient and push through tough times. But…having some DNA which innately makes you a “warrior” could be a BIG plus, too!

Here is the video

I don’t know if this is a genetic trait but I would like to pass on faith. In the good in people and in positive outcomes born of honest effort.

My hustle, presentation skills, my unflinching support for honesty and ethics, my sharp memory aka ability to recall, my love for nature and animals.

I would hope my daughter develops self confidence from an early stage in life.

My ability to persevere

The absolute belief that you can do anything you set your mind to, with integrity and hard work, without being blinded by gender based lenses. In one line…be gender blind but always respectful of other perspectives.

Align with yes, you can people vs no, you can’t people!

My patience and the ability to focus on the larger picture.

I have a few : God-consciousness, Integrity, Gratitude, Intelligence

Attitude and right choices in food

It would be a toss up between ‘the resilience to bounce back’ and the ‘discipline of gratitude’…
– ‘Courage, thats what I would pass on. Courage to be you, to bounce back, to stay grateful…’

I actually have three traits that I would like to pass on to my daughters (I have 3) are: self-confidence, perseverance, passion for life.

To be caring, compassionate and to value human relationships.

My passion for work. I hope any daughter I have has a purpose in her life – something she can put her mind and soul into.

Never ask yourself If you can do something… you can do anything you set your mind on.. period. Ask instead of you want to do it.. the choice is yours. This is what my parents taught me.

The courage to believe in yourself. Being patient.

Getting things done and Resilience

I will pass on my DNA according to my Genomepatri

Empathy is the highest value I learnt at Anandwan and would like to pass on to my next generation.

However, empathy needs to be taught to children through demonstrations in daily life. Empathy and compassion will help children grow into responsible citizens by inculcating in them a global outlook, love of nature, concern for mankind and respect fod others that will together widen their horizons, enable them function with clarity and efficiency in the modern world.

Would like to pass on “my ability to learn”

Perseverance and confidence in my abilities

Independence. It is something that my mother instilled in my sister and me and it has helped us both deal with life.

I want to say resilience but I think compassion for others is something I hope she will have.

I don’t have kids but have a sponsored girl in Cambodia and have always been very touched when I see how much she cares about the people around her even though she has a disability and comes from a very difficult background.

Trying to be a voice for others who might not have one is where my work stems from so even though resilience is of course something I feel keeps me going but compassion is where for me, resilience draws strength in my humble opinion.

Need to always learn and evolve

Unquestioned belief in the Divine Hand

Two traits – God given enthusiasm and treating everyone as equal (all are one).

The guts to challenge power

Assertiveness – ability to speak your mind and be your true self in all situations. To defend who you are and what you stand for no matter what.

Compassion, not just for humans but all souls especially those that can’t talk.

Pass on my will to never give up

Versatility is the trait that I would want my daughter to inherit from me. Versatility is about spinning wheels, juggling balls and walking the tightrope like a ramp model! Balance, Poise and Performance.

I have a daughter and I wish to pass on my passion for helping others and my creativity.

Resilience is the most important trait in a world that is changing faster than ever before. Humour is my preferred coping mechanism and it’s a crucial element to developing resilience. And empathy! We could all use a bit more empathy with ourselves and the people around us.

I think the trait I most value receiving from my parents, and that I would want to pass on to my daughter is curiosity since it serves as a great guide and motivator. So, I hate the expression “curiosity killed the cat” and detest when people discourage kids from asking questions.

I think it would be between empathy, risk taking / being bold, and gratitude.

I would love for my Nirvana to have the passion for life, like I do.

The one trait I would like to pass on is gratitude for all the blessings.

Perseverance that would stem from a strong belief in herself. I believe a woman can achieve anything she sets her mind to if she just doesn’t give up or buy into the self limiting myths that other people tell themselves. To me, Life is not about comfort, it is about what we can pay forward from the luck of our position.

I would like to tell my daughter to be independent as far as possible. From being able to drive on her own to doing her research to taking the next big life or career decision, stand on your own feet. Things are in control when independent.

Empathy and a sense of Humour – in that order.

Ability to take many things in my stride without losing composure.

Persistence.  I just don’t ever give up.

I enjoy being driven & feeling that fire in my belly, I would like to pass that on ?

I would like her to have the trait of always considering a man equal to her at home and at work..

A belief that there is nothing – absolutely nothing – that she can’t do if she truly sets her mind to it. Fuck what the world thinks.

I don’t have a daughter. But if I did, it would be courage of conviction and self belief. On a lighter note, a thick skin.

I would like to pass on my “never give up” attitude to my daughters!

I do have daughters, so it’s very apropos! I would say ‘perseverance’ (so they would do the hard work and bear the risks it takes to achieve anything worthwhile in life, whether in their professional or their personal lives).

Ability to bounce back from Adversity

To my Daughter I would like to pass on my self belief and persistence. If there is this SB and P Gene in my body, I’m confident that it will help her transcend everything that stops her from achieving her dreams!

My independence and fearlessness

Perseverance, passion and hunger for whatever she wants to do in her life and not settling less than what she think she deserves, ability to love and be kind to people, have strong beliefs and faith and courage to stick by them, take as many risks as she can and never stop having fun and enjoy her life!

I guess it would be Adaptability. She should be resilient to change, as not always everything is in our control.

Being kind to people and outdoor adventure spirit

I would pass on integrity. Self belief through values give you strength to hold up the sky.

Courage to question things as they are and the Compassion to always work for change in a way that elevates rather than diminishes.

I would like to pass on nonjudgmental curiosity about herself and others.

The traits I would like to pass on to my daughter are my laughter and my ambition.

Ability to choose good food and discipline to eat right and stay fit physically and mentally.

To all the daughters I may ever have ? madness

The one trait that I would like to pass onto my daughter is – Resilience.
Stress from work, family and self is an inevitable part of our lives. To top that off, there are always things that happen that are beyond our control- loss of a loved one, failure in a project, rejection. Being resilient at times like these has helped me retain focus and continue pursuing my goals – professional and personal.

I want to quote an article I read recently – ‘Resilience is about how you recharge, not how you endure. The key to resilience is trying really hard, then stopping, recovering, and then trying again.’

I’d like my daughter to do whatever it takes to keep going on.

The trait I want to pass on to my daughter is Stamina – never giving up and keeping on fighting to take dreams to reality.

My deep sense and understanding of dignity; my global linse & my ability to love and receive love.

Believe in yourself, never lose your sense of wonder.

Stand for what you believe in even if there is no support from those around you.

Courage to be yourself

I would like my daughter to be an independent human who can bring about a positive change in the society just like I’m doing.