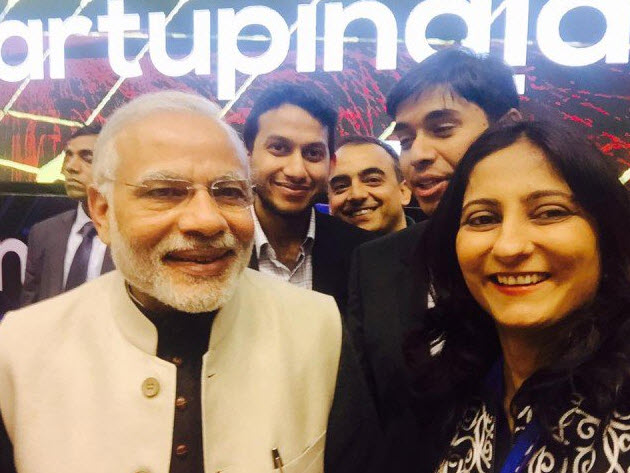 Mapmygenome CEO Anu Acharya shared the stage with Hon’ble Prime Minister Narendra Modi at the unveling of the action plan for start-ups at Start-up India Stand-up India meet on January 16, 2016. She was also a panelist at the session “Making Indian Healthcare Leapfrog”. This post is a collection of snippets featuring Anu at the event.

The founders of InMobi, OYO Rooms and Mapmygenome in a selfie with Prime Minister Narendra Modi at the Startup India event in New Delhi on Jan 16, 2016 (image: Anu Acharya)

…Into the weekend, entrepreneurs concurred that the new startup agenda is a good beginning. “It’s a fine plan with lots of interesting details, a lot will depend on how it is implemented,” said Anu Acharya, CEO & founder of Mapmygenome, a biotech startup. “What makes me hopeful is the awareness among top politicians and bureaucrats about the challenges entrepreneurs face,” she said.

Modi said a start-up does not mean a billion dollar company where thousands of people work; it is about employing even 5 people and developing India. Success of start-ups is not only about enterprise, it is about risk taking and adventure also…. There is an energy from within and there are dreams that you have 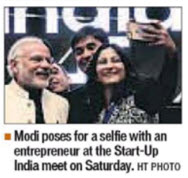 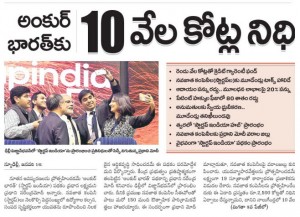 Featured on the front page – Prajasakti 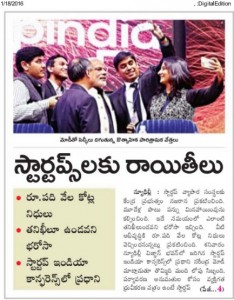 Featured on the front page – The Indian Express 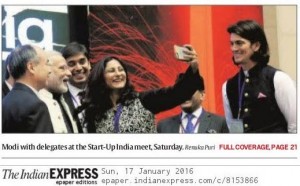 .@AnuAcharya of @MapMyGenomeIn tells us why she started the company and what are her hopes from #StartupIndia https://t.co/QcZEgKBXTc — CNBC-TV18 News (@CNBCTV18News) January 16, 2016

This is the ultimate #MakeInIndia project, because it deals with people like us, who are made in India! @anuacharya of @mapmygenomein — Supriya Paul (@supriyapaul93) January 16, 2016

@anuacharya Finally you got the selfie with @PMOIndia which also got splashed over National newspapers ; pic.twitter.com/CgozpkgrJg — Harsimran Julka (@HarsimranJulka) January 17, 2016