The wacky world of DNA 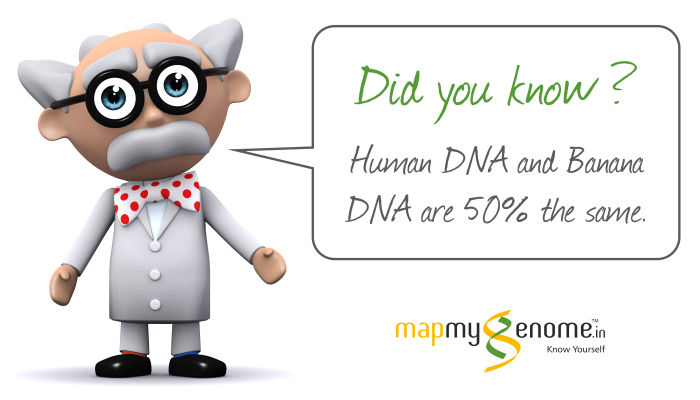 Can you roll your tongue? Damn, I just can’t! How about your earlobes? Are they attached or unattached? Remember that man who came to drop off your pizza the other night? His fingers were so hairy! You looked down to see if you have the same problem…come on now, don’t deny it! Oh and those dimples on that girl at the mall! Uffff!! Killer! Why does my girlfriend not have them?

We all share about 99.9% DNA with each other. Whaaaaat? It’s true. That 0.1% difference in our genetic make up is what makes Hrithik Roshan look spectacularly handsome in his new photoshoot, while the genetic counsellor in my team can never seem to look better than a Rhesus monkey, no matter how hard he tries! It’s this 0.1% difference that led to our HR manager losing so much weight over the last 2 weeks, while I’m pretty sure I gained a few kilos just by THINKING about cheesecake…ooh cheesecake…

… It’s also this 0.1% difference that makes us susceptible to different diseases, and dictates how we respond to the same drugs (I’m talking medicine here college kids! Calm self).

But as with everything else in life, our genes can also go absolutely nuts sometimes! Read on to know some facts about the Wacky world of our DNA.

Let’s start with some basics: 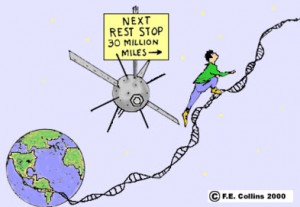 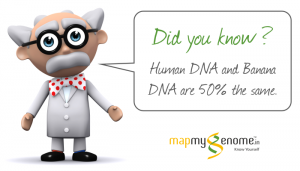 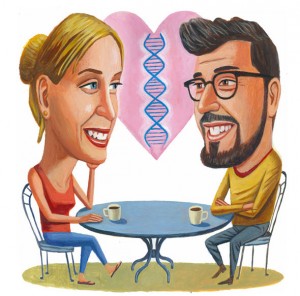 … And now it gets REAL interesting!

Let’s say you have an ide 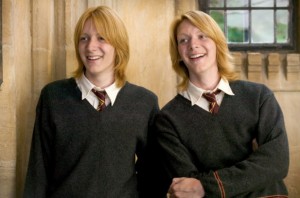 ntical twin. Did you know..you would share 100% DNA with him! Now say you both got married to two identical twin sisters, and had children. 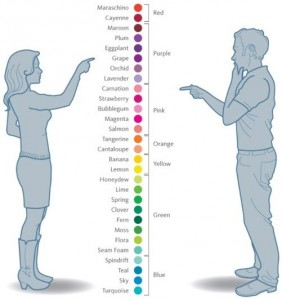 Some women have a mutation which makes them Tetrachromatic. This means that their eyes contain four different kinds of cone cells. This means that compared to you or me, who can just see about one million colours, these women can see and distinguish between almost TEN million colours! No wonder they keep getting angry when we men compliment their ‘pink’ shirt – “It’s not pink! It’s salmon with a slight tinge of fuschia! 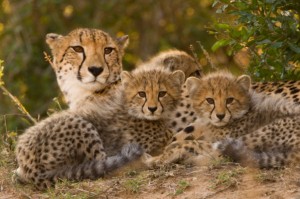 Did you know? Near the end of the last ice age, almost all the cheetahs were wiped out. The handful that survived went on to breed among themselves, and saved the extinction of their species. Thus, every single cheetah out there today, is partially a clone of the rest of them! 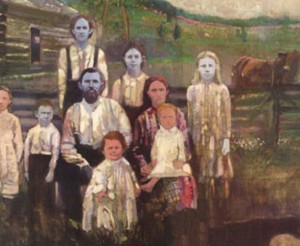 Ever heard about the Fugates? They were a family in Kentucky in the 1970s. The family suffered from a rare genetic condition called “methemoglobinemia”. Thanks to this rare condition and the rampant inbreeding in the family, they all had BLUE-COLOURED SKIN! 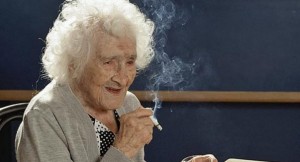 People will have you believe that with the advent of modern medicine and the advances in healthcare, one could theoretically live forever. Well….as it turns out, your genes disagree. Theoretically, our genes are coded such that the ability of our cells to divide in order to survive is limited to about 120 years. The longest documented lifespan is that of Jeanne Calment of France, who defied her genes and lived for 122 years, 164 days -(1875-1997). 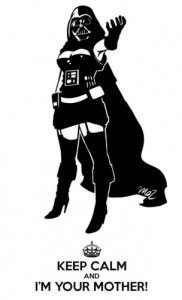 The American agricultural biotechnology giant Monsanto has created the “Suicide seed”. These seeds make use of genetic restriction technology and render themselves sterile after the first generation of crop is grown. 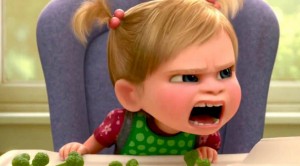 Hate Broccoli? Can’t stand the taste of Cabbage? Just the thought of cruciferous vegetables makes you throw up in your mouth? Well, tell your parents it may not be your fault! Plants belonging to the Brassica family contain a compound which is strikingly similar, chemically, to Phenylthiocarbamide (PTC). PTC can taste rather insipid or very bitter, depending upon your genetic make up! So now you know..when your mom makes that OH YUMMY face while chomping on broccoli..she’s faking it!

Real life superhero story anyone? In 1994, a John Doe, was involved in a devastating car crash. Fearing the worst he was rushed to the emergency room. Imagine the shock on the face of the doctors, when they realised he had not fractured a single bone! Not even a hairline fracture on his spine! This man suffered from a rare genetic mutation that causes your bones to become very very dense. His bone density was more than 8 times that of a normal human! Oh..poor guy couldn’t swim though. Sank like a stone every time! 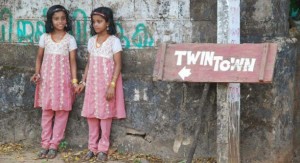 Kodinhi is a small village in Kerala that has geneticists baffled! This village has witnessed the birth of twins at an alarmingly large rate! Over 250 sets of twins, and 3 sets of triplets within just 2,000 families! Inbreeding could have explained this phenomenon to some extent, but it has been seen that even when the women from this village are married to genetically unrelated mean from villages across the nation, they still have a propensity to have multiple births! 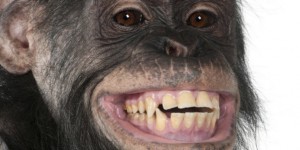 There’s 7 billion of us on this planet now. And we all boast of genetic variations among one another. But did you know, that there’s a group of 55 chimpanzees in West Africa who have twice the genetic variability of all 7 billion humans combined?! Essentially the chimps in that small group in Ivory Coast are genetically more different from one another, than you are from any person anywhere in this world!! 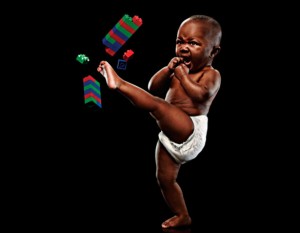 Pumped some iron at the gym today? Feeling the pump? Feeling good about yourself after putting in all those hours building some muscles? Tch tch, if only you were “Uberboy” – a John Doe born in Germany in 1999. This kid was born RIPPED! Yes he would have put Wolverine to shame. Four years into his life, and the toddler Uberboy was lifting more than six times as much weight as other toddlers his age. Before you ask me..no he wasn’t the son of the Hulk, nor was he experimented upon – he had a genetic mutation in his myostatin genes, which are responsible for regulating muscle growth in the body. 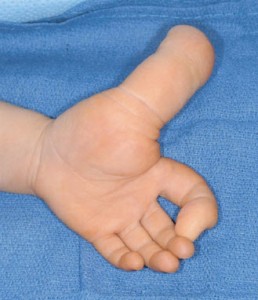 There’s a  rare genetic condition called Macrodactyly, or ‘Local Gigantism’, which causes a certain part of the body to grow to a larger than normal size. In 2007, a man from China called Lui Hua was hospitalized with this condition. At the time of admission his left thumb measured over 10 inches (25.4 cm) and his index finger almost reached 12 inches (30.5 cm)! 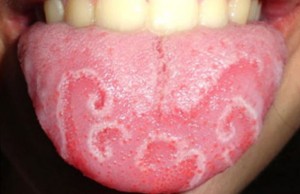 This is weird yet could be aesthetically pleasing (?). Affecting about 3% of the world population, erythema migrans or the “wandering tongue rash” is a rather common genetic mutation. This condition is harmless, causing depapillation of the tongue in certain areas, rendering them smooth and red. These depapillated regions are dynamic, giving the tongue a rather map-like appearance. No wonder it’s commonly referred to as the “Geographic Tongue syndrome” 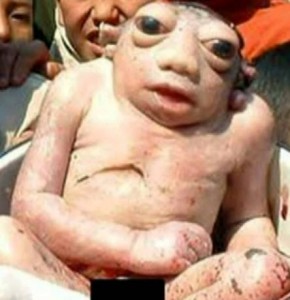 Holy Leaping Frogs!! 2006 saw the birth of a neck-less baby with gigantic eyeballs bulging out of his head, giving him a rather frog like appearance. His sisters on the other hand were absolutely normal. This baby suffered from a rare genetic condition, leading to a medical condition called anencephaly, which is characterised by the absence of major portions of the skull, scalp and brain.